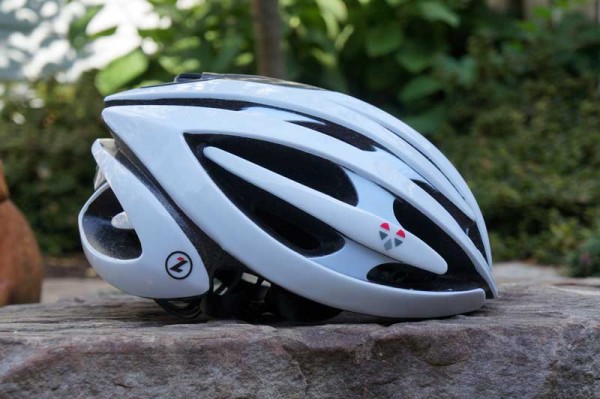 Introduced last year as an IndieGoGo project, LifeBEAM’s helmet-integrated heart rate monitor has not only made it into production, it’s been improved to include dual transmission to work with more devices.

Built around an optical sensor also used in military, hospital and sports watch applications, heart rate is measured by bouncing light off the skin and measuring the reflectivity to determine raw heart rate. The built in processor at the back of the helmet converts that data into a cleaner HR signal, accounting for movement and other “noise”, then broadcasts it over both Bluetooth 4.0 and ANT+ simultaneously.

Compared to a chest strap, LifeBEAM’s optical solution works instantly and flawlessly…no need to keep a moist layer between a physical contact point and your skin like with traditional heart rate straps. It’s also far more convenient, particularly if you’re like me and only remember said strap once fully dressed and ready to roll.

Click through to see how it works, tech details and why it’s only getting better…

Early orders get this limited edition carbon-look helmet case, which packs in the charging cable and a helmet bag. Instructions and helmet info are also included. It charges with a standard MicroUSB cable. 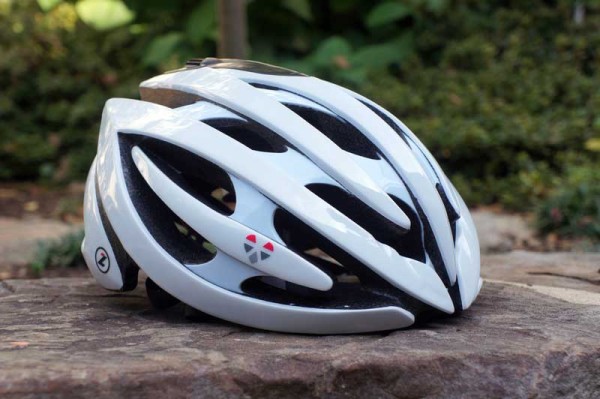 The LifeBEAM system comes built into a Lazer Genesis helmet, which is unmodified from a stock helmet save for the headband padding.

The Genesis is a mid-level helmet with all of Lazer’s premium fit and safety features like Rollsys, integrated blinky light and in mold construction. There are plenty of vents… 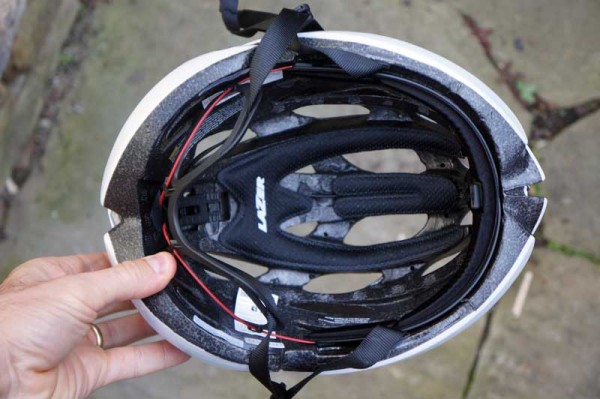 …and some internal channeling to keep you cool. 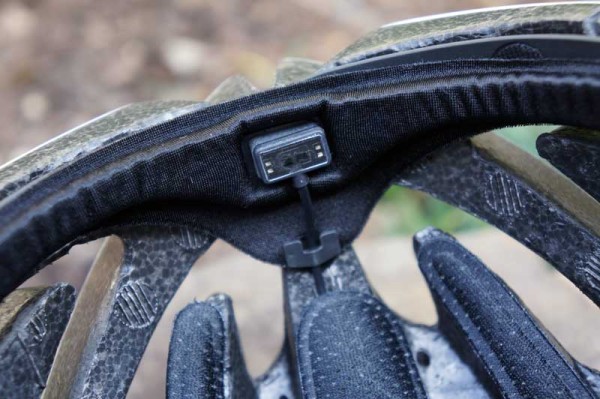 The optical HR sensor sits at the center of the forehead surrounded by a thick gel pad across the brow. The sensor must make contact with your forehead to work, but once it’s on I couldn’t feel it. 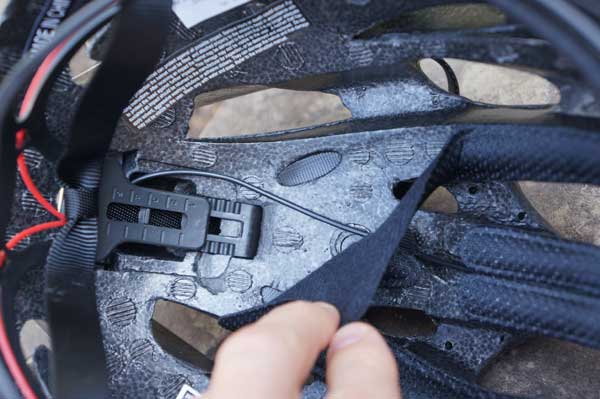 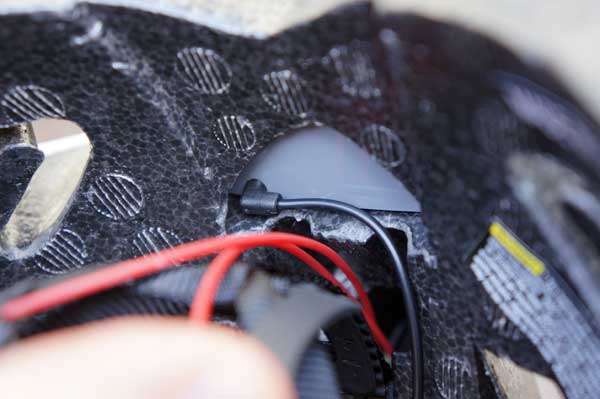 …and into the transmitter/processor at the back of the helmet.

While it’s a stick-on device, it’s really stuck on there. It’s not meant to be removed or switched to a different helmet, particularly since the transmitter is shaped to fit specifically on this helmet model. The charging port is hidden behind a rubber flap on the back, power button is on the bottom. The light glows and pulses blue when turned on.

To use it, all you need to do is charge it up and turn it on, then sync with any devices you want within 20 minutes of powering up. I synced to a Polar V800 watch and Sigma Rox 10.0 in about five minutes, and that’s only because I had to navigate their menus without instructions to figure out how to get the devices to pair. The actual LifeBEAM part of it was effortless. Once the devices were on the right menu option, they picked up the helmet immediately.

After the initial pairing, which was in the office and not immediately before a ride, I did have to start and stop a workout on the watch to get it to pick it up again, but I think it may have simply been that I started a workout before turning the helmet on. So, mental note: Turn the helmet on first, then start a workout timer on a device. I had no such issue with the Rox 10.0. 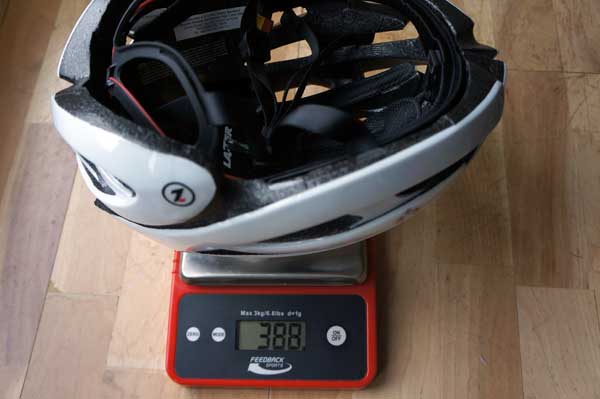 Total weight for a size Large Lazer Genesis helmet and with LifeBEAM system is 388g. Not light, but I really didn’t notice it over the course of my 2.5 hour mountain bike ride for it’s first test. Most of the additional weight is at the back, which presumably helps balance it out a bit. 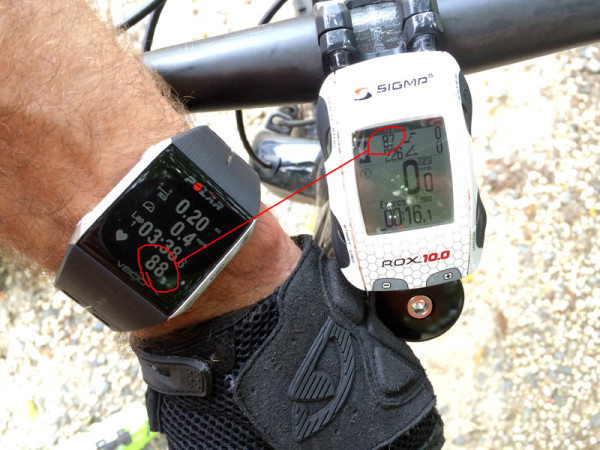 The dual transmission can simultaneously broadcast to Bluetooth and ANT+ devices. With the current 4.0 Bluetooth iteration, a device can only be paired to a single other device, but we hear that’s about to change. ANT+, however, can send data to multiple devices, so if you had an ANT+ watch and cycling computer, both could display your heart rate. (Note, the Polar watch is BT, the Rox 10.0 is ANT+. The watch tended to show faster real-time changes in my heart rate, but both were pretty well synced over a three second average in my scientific “stare at both devices for three seconds” test.)

This shows part of my first rides with the helmet (the other part was recorded separately since it was a ride with my son and much slower). The red line is HR, and the recording was continuous and steady throughout the entire workout. 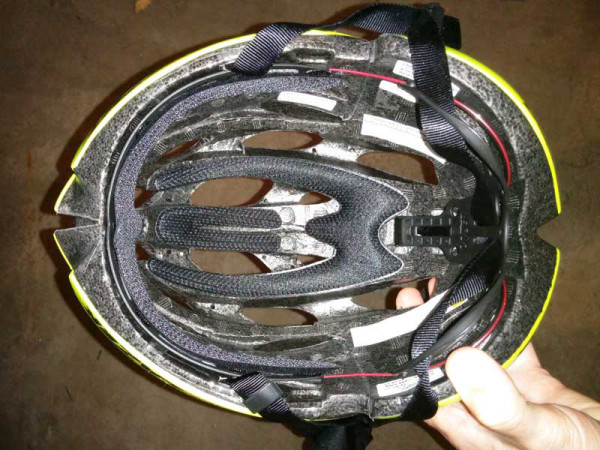 The only concern worth mentioning is that the gel band and forehead sensor makes the helmet fit tighter. Above, are the standard Lazer Genesis helmet’s Coolmax pads, which are soft like any other helmet pad and compress quite a bit. Below is the Lifebeam’s thicker gel pads side by side with the even thinner X-Static pads on the Helium: 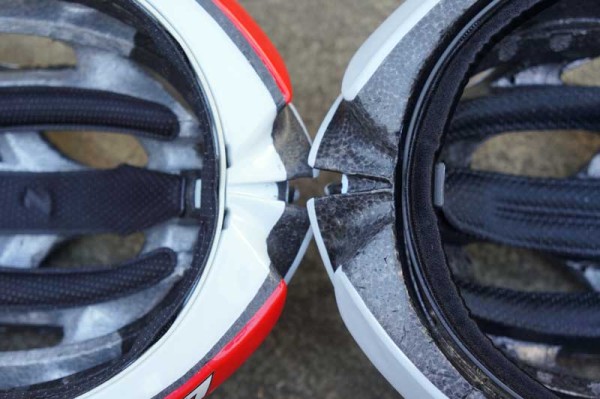 The thicker gel pads and the limited size options for the Genesis (Med or Large only) could create fit issues for some folks. For me, I’m usually a medium in Lazer’s helmets, but with the LifeBEAM version, I needed a large. The medium was simply too tight front-to-rear to be comfortable. The potential downside for wearing a size up to accommodate the thicker gel pad is that it leaves extra space on the sides of the helmet. That room between shell and skull could allow for too much movement and a harder, faster effective impact in a crash that landed on your side.

Fortunately, LifeBEAM’s rep told us they’re already working on versions for Lazer’s higher end Z1 and TT helmets, both of which have a wider range of sizes. Plus, Lazer’s Chris Smith told us they’re working with LifeBEAM to reduce the sensor’s thickness, allowing for a thinner gel pad. Both solutions should eliminate most of the sizing woes.

Best bet? Try one on. If it fits, I’d say it’s the best solution for measuring HR on the bike as it combines equipment and is priced well. The LifeBEAM Genesis helmet comes in at $229, a $55 premium over the $175 Genesis helmet.

They need an adapter for ICEdot, to call off the ambulance.

wont work so well for guys that ride with headbands/caps though right?

“The sensor must make contact with your forehead to work, but once it’s on I couldn’t feel it.”

Love that there’s some good options now to still measure your heartrate, but lose the sweaty bra-strap.

Trick I’ve found to work well:
I got a MIO Link HR monitor, pull the HR pod out from the watch band and then just put the little pod in my bibs just above the leg-cuff.

Pros:
Perfect way to get accurate HR, no sweaty bra-strap, and don’t have to be locked in to one particular helmet.

Cons:
If you are running around and need to take off your bibs for some reason you need to remember to grab the pod or it’ll fall out.