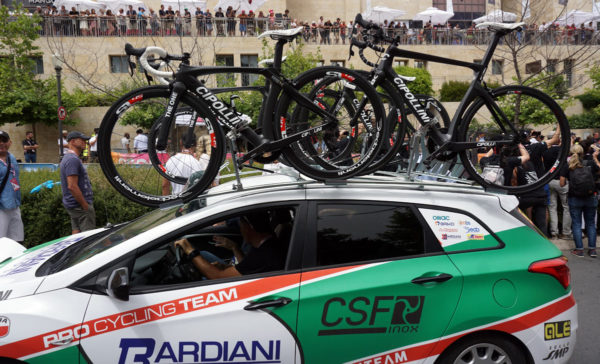 The #GREENTEAM rides Cipollini’s angular RB1K and NK1K bikes for the road stages, and was one of the few teams running SRAM at the 2018 Giro d’Italia. Equipped with eTap shifting and a full Deda Elementi cockpit and wheels, they had a few things we don’t see very often at the top level (or, ever, really). 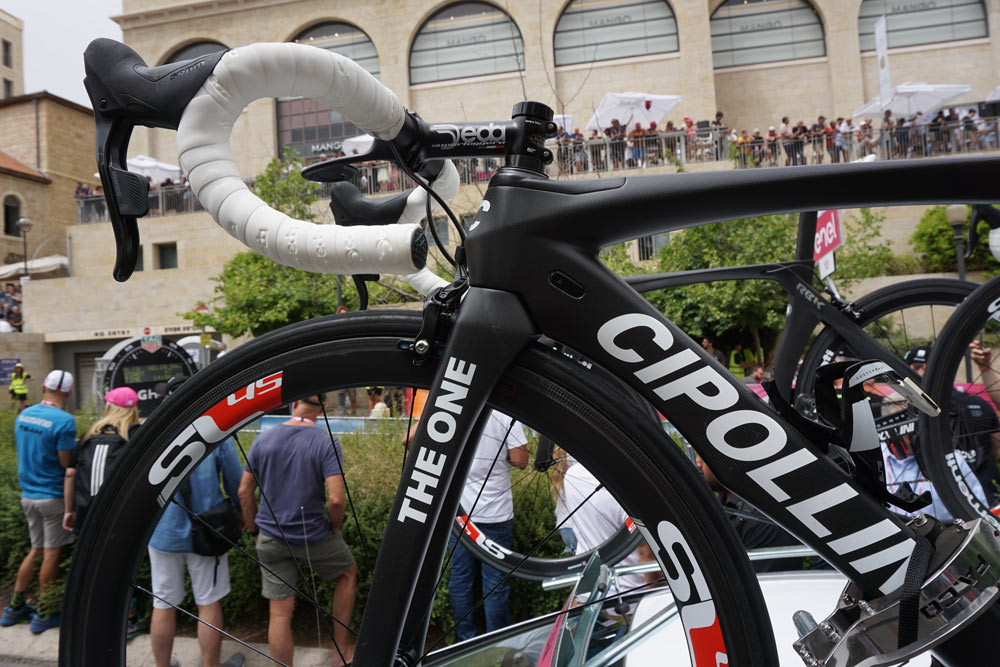 Even in matte black carbon, Cipollini’s frames are about as audacious as their namesake founder. Using wild angles and shapes, they certainly stand out from the rest. 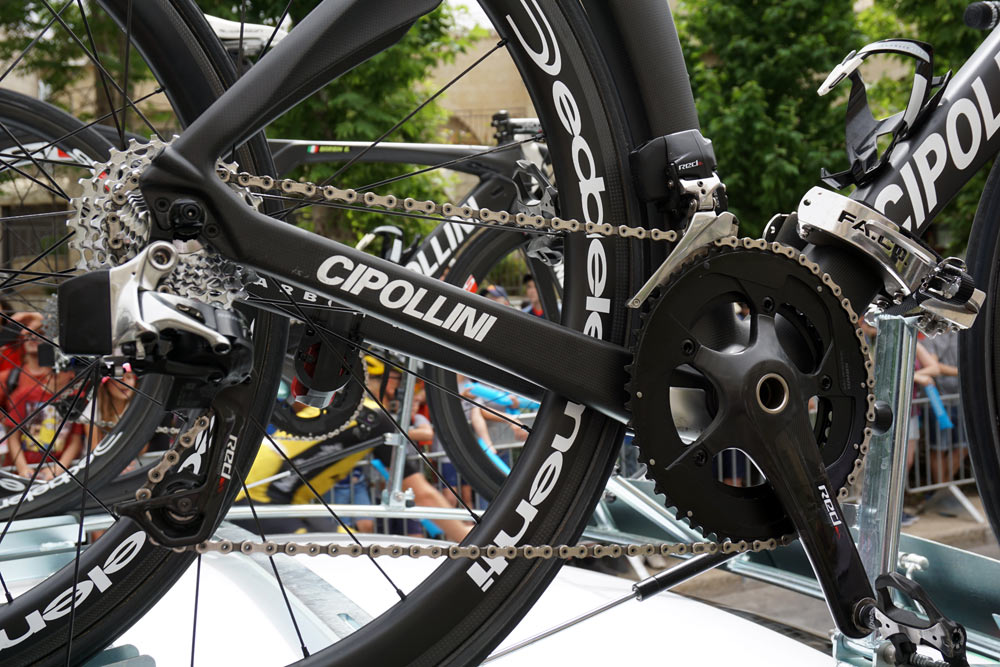 So far, most of the bikes we’ve seen have been running Shimano Dura-Ace, with a few Campy equipped bikes, too. 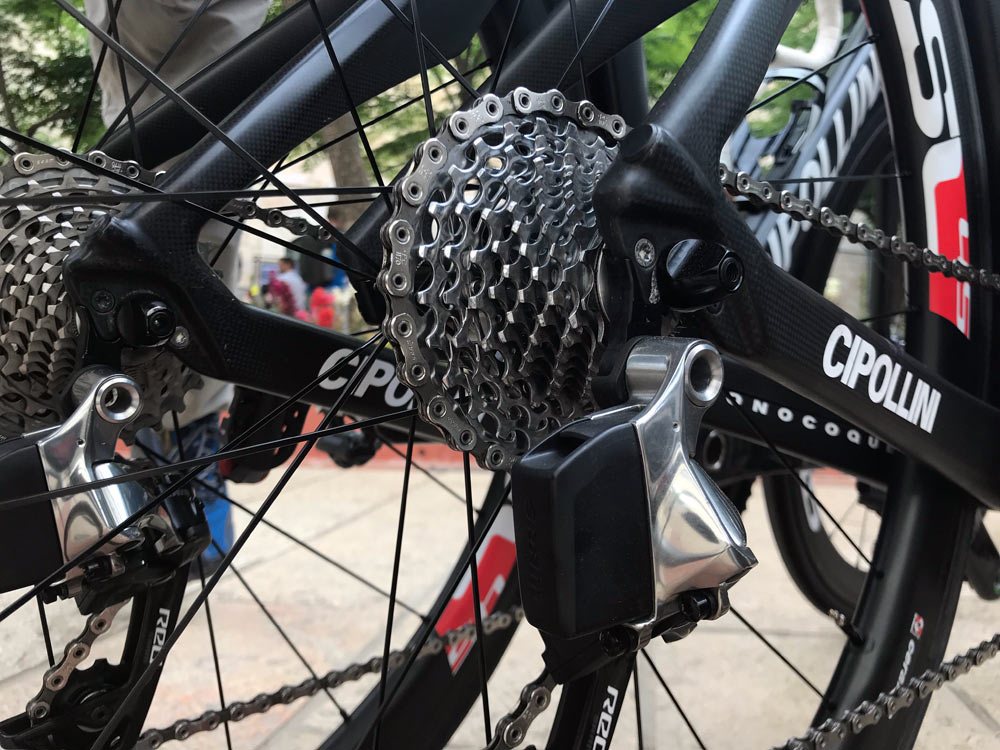 Polar computers are also a rarity on pro bikes. Polar’s sleek, aero adjustable mount lets you attach it on either side of the stem and dial in the angle so your computer is perfectly aligned.

BePRO pedals offer a pedal-based power meter system using Favero electronics, which puts the strain gauges and transmitter on the spindle. It’s a compact form factor, but this isn’t it. The power meter equipped models have a bulge on the spindle where it sits against the crank arm, and it comes in left, right or dual pedal systems. So, either the team opted to run the standard pedals, or these are hiding a new, slimmer version inside the already very slim pedal body. That thick silver part against the crank arm is a fixing washer/bolt system to keep the pedals from accidentally coming loose. 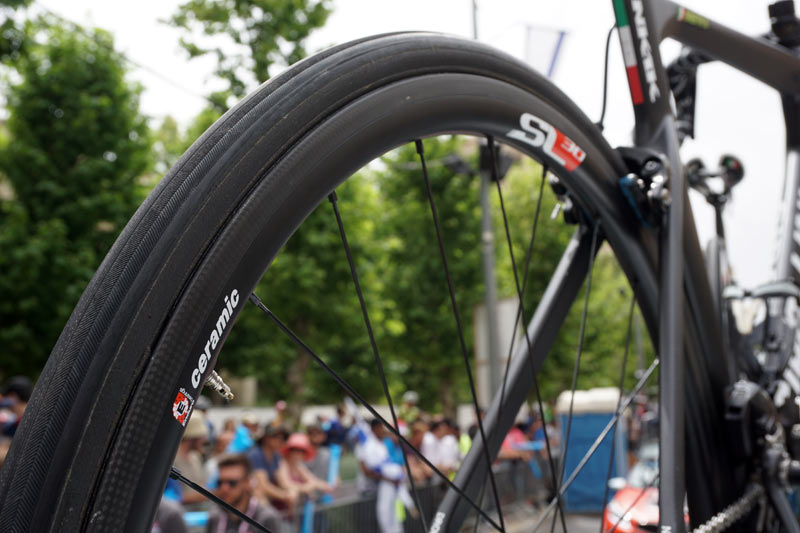 Deda Elementi wheels are also rare at this level, and they were running a mix of SL30 and SL45 wheels. The tires were completely unmarked, and the tread pattern doesn’t match any of team sponsor CST’s current models, so either they’re running something else or these are new. Check out the team page here. 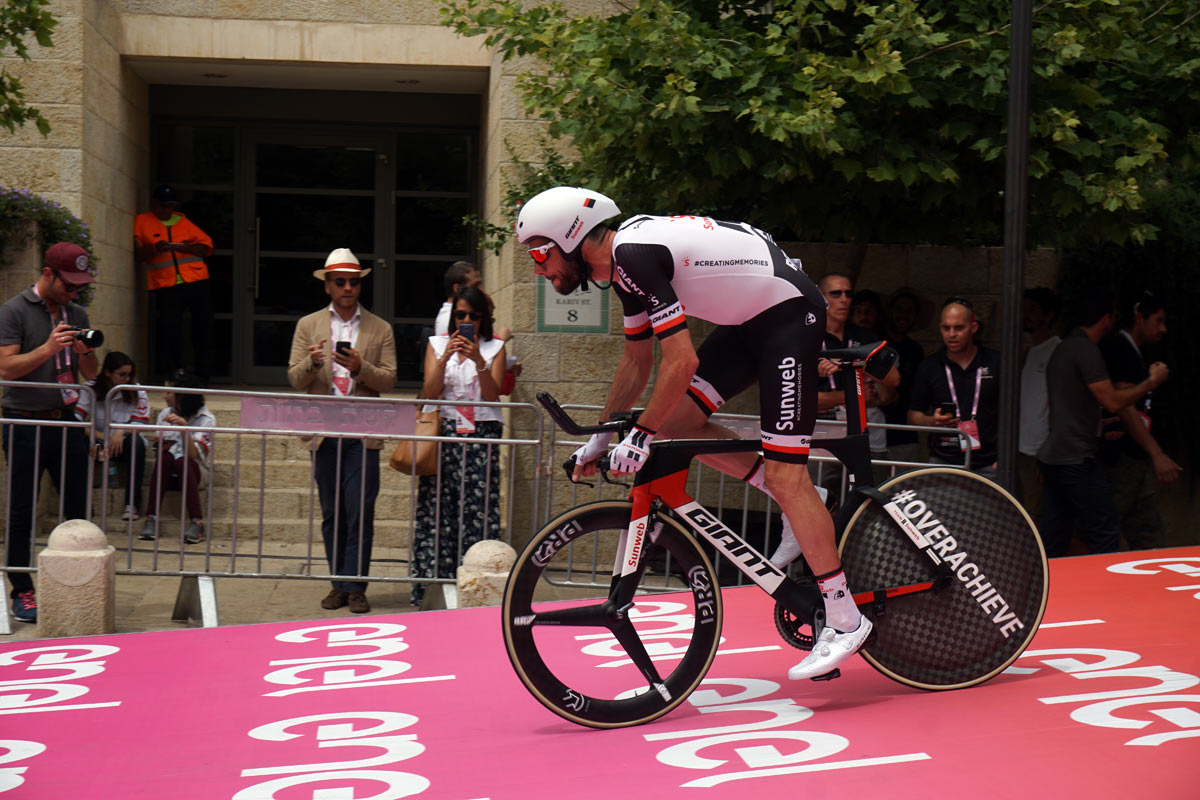 Giant-SunWeb used their TCR Advanced SL road bikes for most stages and relied on the Trinity Advanced for time trials. 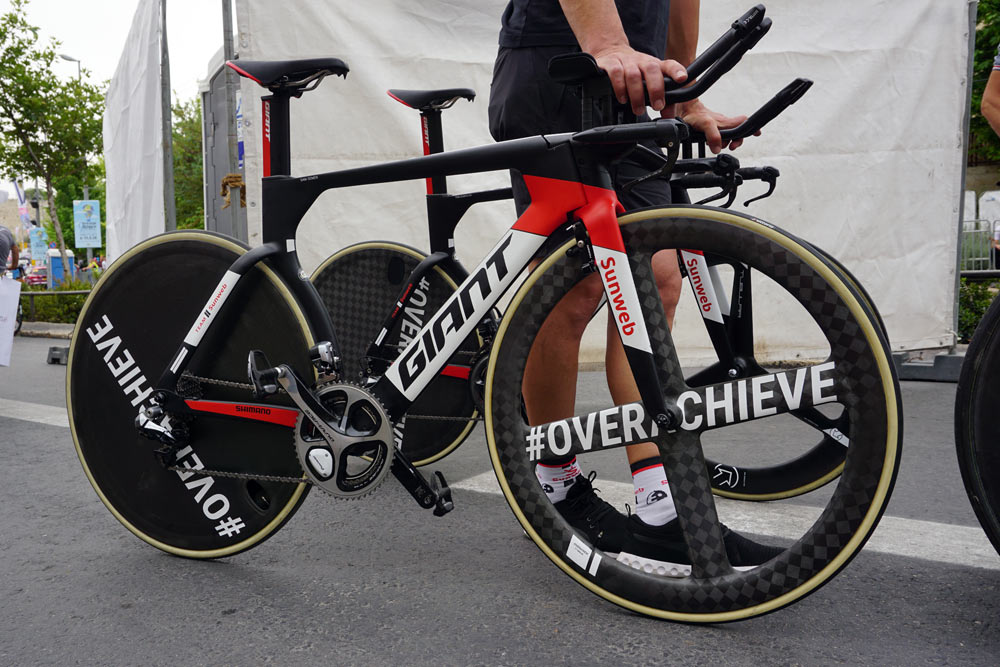 For TT’s they rely on Shimano PRO wheels, though their team website says they’re running Giant wheels for 2018. The rear discs clearly say PRO on most of them, and other features line up with Shimano’s current offerings, but that four-spoke front is a bit of a mystery. Here’s why: It has Giant’s striped model name decals at the valve stem, but they don’t currently offer any such wheels. Shimano PRO has had a four-spoke option in the past, as has Corima…any guesses?

The road bikes use Giant’s carbon SL42 and SL55 wheels. Vittoria tubulars are on all of them.

Electrical tape under the grip tape provides a little something more to grab onto than smooth matte carbon. Note the tiny magnet stuck on the rear disc wheel, placed to trip the speed and cadence sensor on the chainstay. 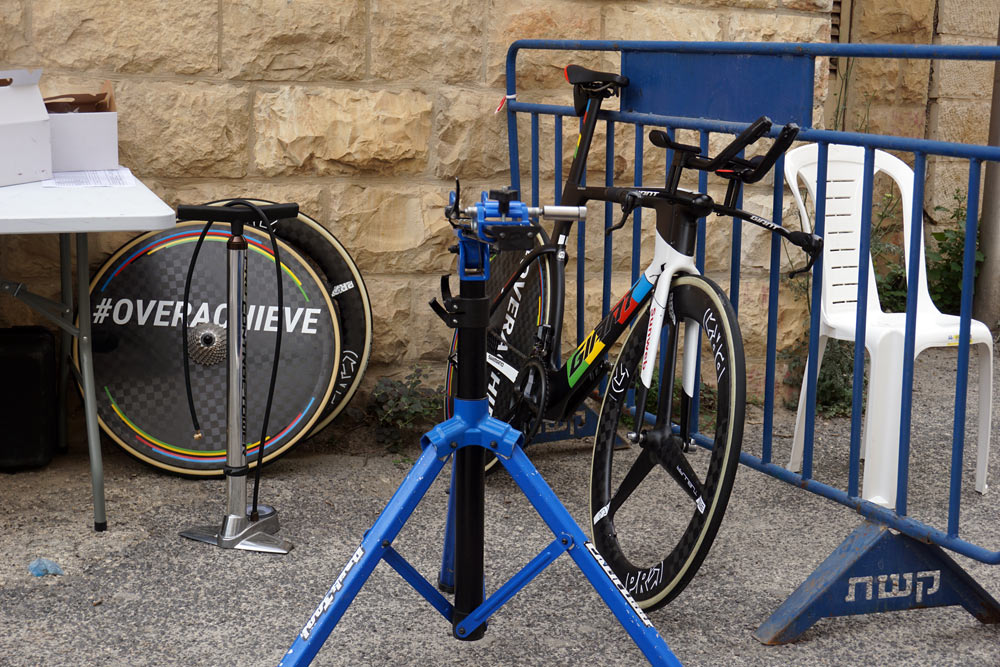 Tom Dumoulin gets a custom painted UCI rainbow stripes TT bike and wheels. The colors are because he was the 2017 men’s individual time trial world champion, but he also won the Giro last year and is putting in a strong showing for 2018. 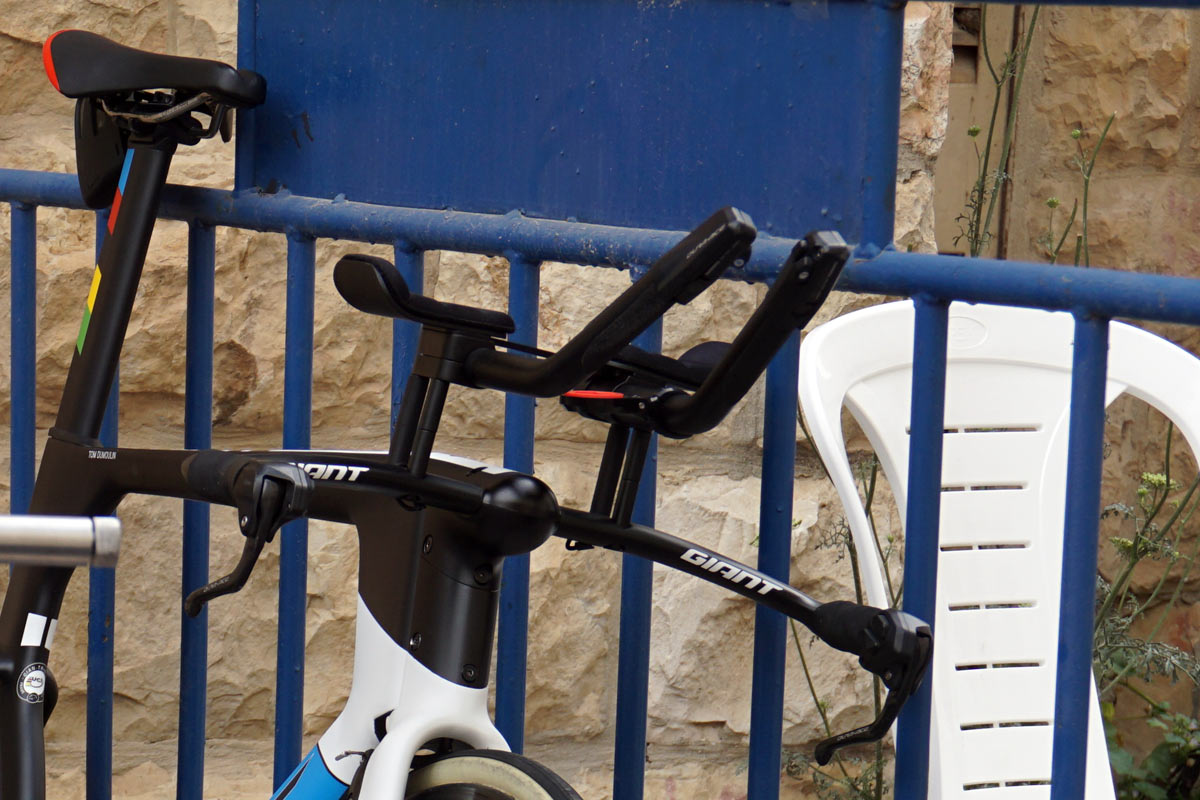 Giant’s Trinity gets a torpedo shaped stem fairing and uses a unique two-pole spacer system for their aero extensions mounts. It’s a stock item anyone gets on their bike, but it’s usually hidden behind all the triathlon bento box and hydration solutions bolted over it. 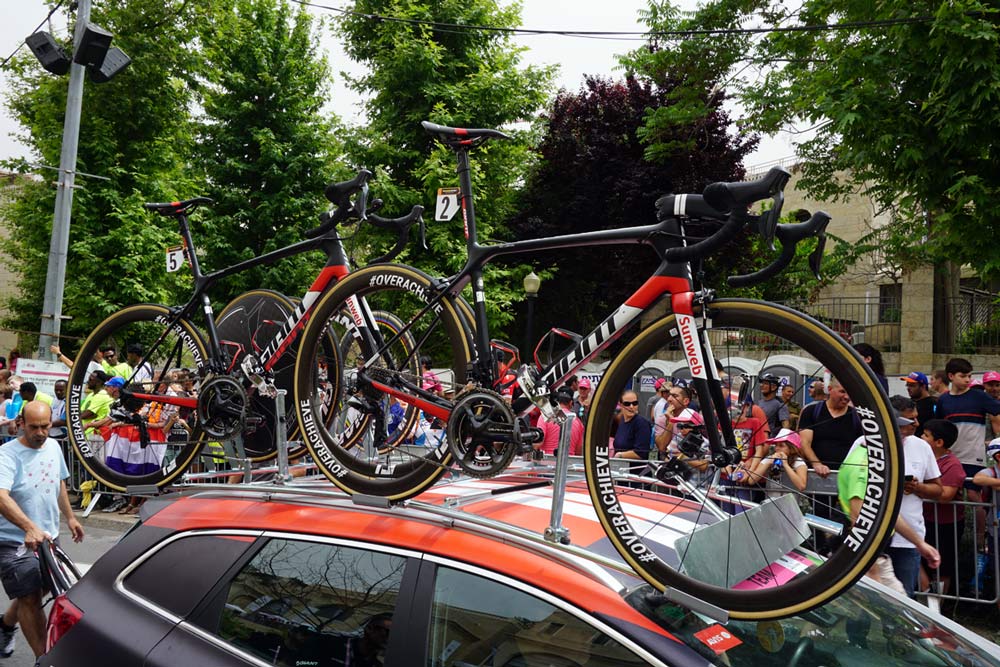 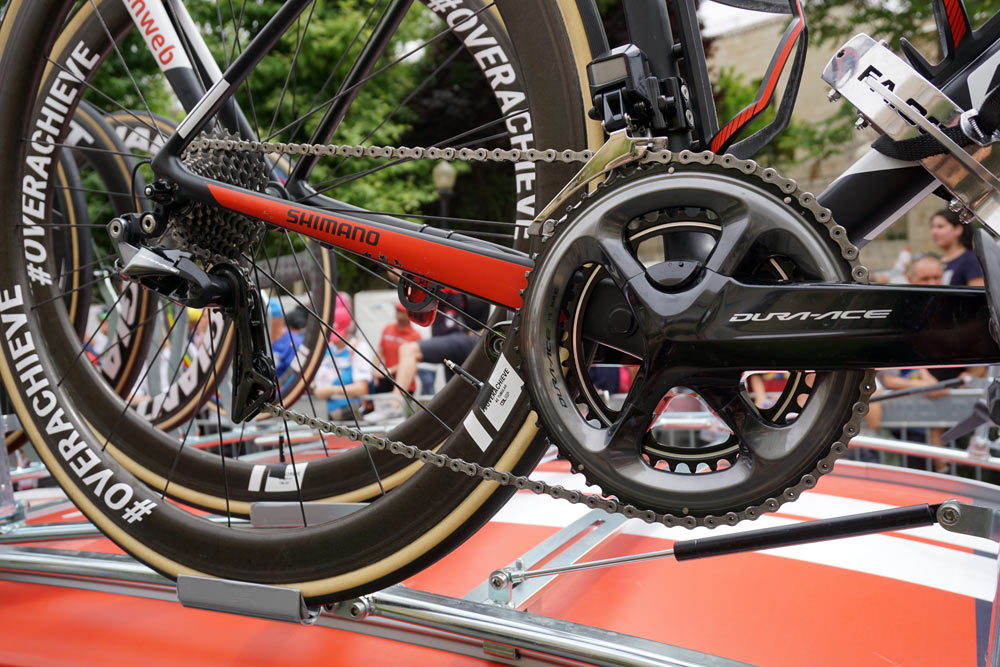 A couple of the bikes had carryover Pioneer power meters still mounted, but the team is officially sponsored with Shimano and their new powermeter cranks.