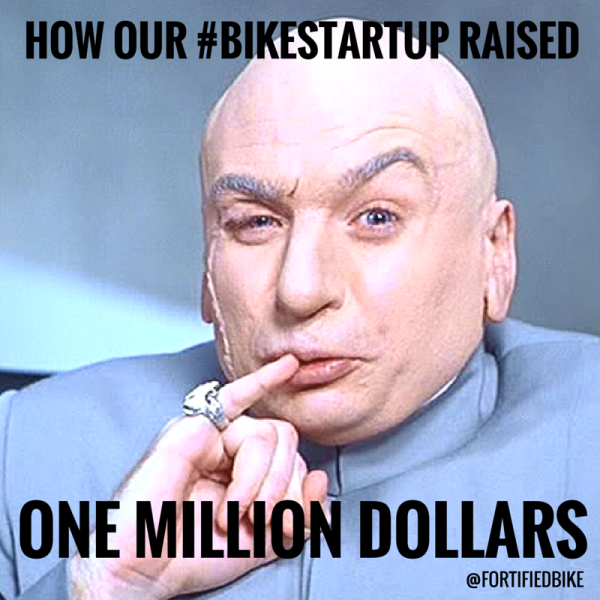 The last six months on the fundraising warpath was one of the most emotionally challenging experiences of my life. If you can start and grow a business at a speed that makes you happy, then don’t raise money. There are many fundraising options, like Kickstarter, that don’t require investors. But if you’re ambitious (read: impatient) and organic growth is not fast enough, then fundraising is the startup steroid you need.

When I say raising money I’m not talking about borrowing $20K from your friend’s rich dad. I’m talking about finding experienced, professional early-stage angel investors and venture capitalists (VCs), who will inject funding into your company and expect a big return. And believe me, this looks nothing like an episode of Shark Tank.

Here’s what we did to raise money…

1. We had to prove traction:

In the 1980s you’d sit at a typewriter and write a 30-page business plan to raise money. A VC would read it, invite you to a series of meetings, and if they liked your plan, write you a fat check. In 2015 business plans are dead. It’s far better to build a minimal viable product than to pontificate for 30 pages. We hacked prototypes, showed them to customers, and launched a Kickstarter. If we hadn’t done that, we would have only raised $0-$50K at a company valuation of $200-$500K. Since we had proved traction with thousands of customers using our theft-resistant bike lights before raising money, we raised $1M at a multi-million dollar valuation.

2. We harnessed our inner Dr. Evil:

A VC who invests in your startup is looking for a 10X return on investment (ROI). When an VC funds 5 companies, they expect 2-3 to die a fast death, 1-2 to give a boring 2X return, and one to be an Uber (aka “unicorn”) that’ll return their entire investment portfolio. That’s why 10X ROI is the magic number. To hit 10X ROI, Fortified Bicycle will have to be #1 in our category: city bicycling.

So, next we needed to convince investors we could become #1 in this category. When we started pitching investors, we made the mistake of pitching chronologically: “First we made these theft-proof bike lights, now we’re launching a theft proof bike, in five years we will TAKE OVER THE WORLD”. By the time TAKE OVER THE WORLD entered the pitch VCs were already eye-glazed and checking their Apple Watches.

So we flipped the script. It sounded like this:

Start with your big, scary, crazy vision of TAKING OVER THE WORLD. That’s what gets investors excited. Then back into your traction (i.e. evidence) that you can pull it off.

3. We didn’t waste time on non-believers:

Ben Berte, a friend, Harvard educator and entrepreneur taught me, “don’t waste your time with non-believers. They’ll never get your vision anyways. Spend your time finding the believers.” Many investors simply won’t get your idea, but you’ll find a few (in our case, 19 out of the 200 we pitched) that understand immediately. Within minutes of pitching them, these investors are tossing ideas back at us. They gave us inspiration and you walk out of that coffee shop ready to TAKE OVER THE WORLD!

And those 181 non-believers that negged us? They were super-valuable as well! Every rejection is an opportunity to experiment and learn. After every meeting, my cofounder Tivan and I would tweak our pitch like standup comedians constantly refining a routine after each show. 100 entrepreneur-hours and several all-nighters later we were at investor pitch #25 and our “routine” was solid gold. Checks started to roll in. At that point we knew a rejection wasn’t our fault: it was because the investor was a non-believer. Instead of trying to convert them to a believer we spent that time finding believers.

These points just scratch the surface and I’ll take a deeper dive into the process in the future. In the meantime, ask me questions in the comments. As always, I’ll answer every single one of them.

Slava Menn is a serial entrepreneur and CEO of Fortified Bicycle. He loves biking, building, entrepreneuring, and teaching. In this monthly series, he shares his team’s hard-learned startup lessons with aspiring entrepreneurs.

Interesting read. I personally have some issues with it, as I do with a lot of things where I read a statement like “But if you’re ambitious (read: impatient) and organic growth is not fast enough, then fundraising is the startup steroid you need.”

Flying out of the gates at a million miles an hour is great but more often than not, in five years time companies that started like this no longer exist. Organic, controlled growth for product based business’ provides a foundation that no amount of money can buy and if you are in it for the long haul, then that foundation is the gold, especially when the next ‘hot thing’ pops up.

Starting capital is important, no two ways about that, we know all about that and all the good and bad things that go with it. But long term prospects rely so much more than a flash sale on Kickstarter or a whack of cash from an investor.

What is good resource for finding angel investors to pitch to?

How do you make a million dollars in the Bike industry? Start with two million!

@antopodean_eleven: I completely agree: growing your business organically is a healthier, more sustainable way to go. As I said, “If you can start and grow a business at a speed that makes you happy, then don’t raise money.”

@Anonymous and @Archer Swift: it takes thick skin to be an entrepreneur. Anonymous commenters like you have helped me learn that 😉

@Sully: The call them angels b/c they’re hard to find – they “drop from the sky”. The best resources are your local startup community. The strongest ones in the U.S. are in NorCal, NYC, Boston, Austin, Chicago, etc. but with our booming startup economy there are vibrant startup communities in most major cities. Hang out at startup events, pitch contests, and other networking events. Beyond that, look at Wefunder.com, fundable.com, and AngelList. This is how we setup our angellist page: https://angel.co/fortified-bicycle

@Slava Menn, I have paid attention to your company (with mixed reactions), and I own a set of your recent Afterburner lights. Considering I find the appearance of these lights to be neither attractive nor offensive, it’s otherwise a good light for its intended purpose, and the battery interface is acceptably 2015.

I didn’t like the specificity of the mounting scheme. That was a weird install.

Something I’d like to see in the future is better optics like those seen in Busch & Muller dynamo lights. Especially in the case with dynamos, you want to voluntarily make your power supply as small as possible (easier pedaling for dyno, longer run life for battery). Could make your pretty darn good light into a fantastic light.

As a bike entrepreneur myself (domestic carbon), the reason I have avoided angel investors is I that I do NOT like to share certain things. As Busta Rhymes once said, “I own all of my sh** never fifty fifty.” And so I have to deal with, you know, being totally broke right now, and that’s all right.

@drew diller – rock on my friend. Your hard work will pay off.

@Slava Menn, thank you for your honesty. I’m thinking about raising money for my bike startup (Iot connected bike frame) because I’ve been told that no matter how much we do in crowdfunding next year, it’s going to take a lot more to build a team and make something that actually changes the world. So far I’ve read one fundraising book and a bunch of blog articles, but none of it has made it clear how to actually pitch and get the deal done. Looking forward to hearing more!

You definitely do not want to waste your time on me. I don’t get it.
The whole city bike thing is way over played.

I started a bike accessory company about 4 years ago. This was before Kickstarter and other crowd-funding sites were available. Quit a pretty good design job to focus full-time on securing the necessary funds to develop a unique product. Took over 18 months of business pitches to have a check in hand. Combined with my own savings I had about $500,000 to work with. Over $300K of that was just towards software and hardware development since that was beyond my own capabilities. Those figures weren’t even close to what I actually needed in the end and I ran out of working capital. One big thing you have to always keep in mind is that you’ll have to pay approximately 50% up-front to any contract manufacturer for your inventory with the rest due shortly after you take delivery.

Anyhow, I ultimately received funding from an angel network group. In doing so, I had to sign over majority share which unfortunately meant I no longer had control. I’m not going to bash angel networks because they offer a lot more than money. Far more! They are typically a group of extremely experienced business professionals that understand all that’s involved in starting a new company. The important parts are the boring parts. The fun stuff is finding a cool office, getting all kinds of cool marketing swag, traveling, etc. I only found out later that the cool stuff doesn’t really matter that awful much. It’s structuring the company so that cash-flow works. Simply being given a gigantic check from a crowd-funding site would seem to me as a recipe for disaster and there are many examples of this.

If you think you need less than $50K to develop your product and order the first batch then I would steer away from seeking funds from any website or angel networks. They won’t even look at you for that kind of money anyhow. It’s when you get over the $250K mark that you are a potential candidate.

“Dual” is two of something. “Duel” is a type of combat between two individuals.

OK, so now that I saved Fortified from ridicule and lost sales, please flip me $50K for development of my ideas. I’m sick of the rest of the industry making money off what I invented.