Originally spotted in early prototype form under Team Dimension Data at Roubaix, ENVE has officially unveiled a new category of wheel: Wide Aero. The prototypes we spotted at Roubaix were rim brake tubulars paired with older Shimano calipers (the newer dual-pivot calipers didn’t have the clearance), but the consumer version will be a disc brake-only offering.

“We were testing wheels on the spring classics (Flanders, Roubaix) and wanted to validate our wheels under teams like MTN-Qhubeka and Dimension Data,” ENVE’s marketing manager, Jake Pantone, told us by phone. “They were testing all of our current road wheels and everything held up fine for those cobbled courses, but at the end of the day they’d ask us “what’s the best wheel for us to use?'”

“We looked at the wider tires they were using, though, and basically said run whatever they wanted because with the 30mm Schwalbe prototypes they were using, the aero advantage was largely mitigated since our first generation SES wheels were designed around 23-25mm tires. So, when you put a 30mm tire on them, you take quite an aerodynamic hit because the larger tires cause early air separation, etc. But that got us thinking, why couldn’t we design a tire to have optimal aerodynamics with these larger tires?” “We went to the wind tunnel and went through a couple of iterations and depths,” Pantone continued. “We ended up with a 49mm deep front and 55mm deep rear. Where it gets really interesting is in the width. The difference in shaping from front to rear is more visually dramatic, largely because they’re so much wider so it becomes more noticeable. At the widest point, the front is 31.2mm, and the rear is 30.5mm, and that sits at the top of the brake track. It’s disc brake specific, so there’s no actual brake track, but that’s about where that widest part is.” 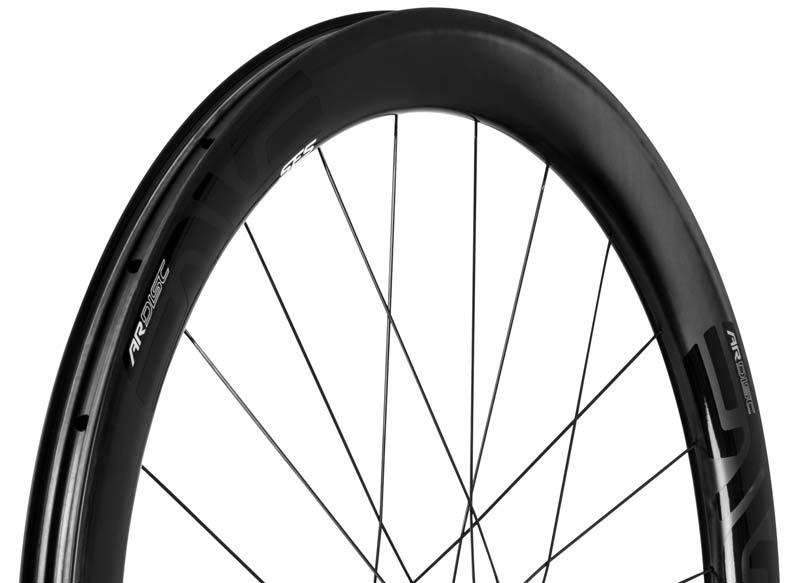 It’s optimized for a 30mm tire on the tubular and 28mm on the clincher. Why smaller for the clincher? Because they say most tires end up measuring closer to 30 or even 31 once they’re actually mounted. The clincher is tubeless ready and uses a hookless bead design, like their mountain bikes, which provides for a better tubeless feel and, they say, improves aerodynamics since the tire meets up to the rim more cleanly. But mostly, the hookless design is because they can build the rims to a tighter tolerance and get better tubeless performance out of it. “People might think this is marketing hype, but I think they’ll find out, like we did, that they’re really fast,” Pantone said. “Another benefit is the improvement in rolling resistance and ride quality because of the higher air volume.”

It’s aimed more at the performance end of the spectrum, meant to go fast over rough roads, chip-sealed tarmac, and well-groomed gravel. The height of the rims and 30mm optimization means it’s not specifically meant for deeper, more aggressive backroads or cyclocross. Think spring classics racing where there’s a mix of fast pavement with intermittent sections of cobbles and broken pavement. And there’s an 80psi max pressure rating, so roadies easing into tubeless can still get the pressure up and experiment downward from there.

Pricing is in line with other SES wheels, starting at $2,900 for a set with DT Swiss 240 hubs. They start shipping at the end of August.

This.
After the release of 3T’s gravaero frame and the recent CyclingTips podcast on tire pressure it was just a matter of time. Hopefully Enve isn’t alone in this segment for long- it’s a category that should make sense for a lot of people.

But that got us thinking, why couldn’t we design a WHEEL to have optimal aerodynamics with these larger tires?”

Ya marking bs to save face. It’s not like customers didn’t ask for it

As wide as mtbs, seems like an odd choice. No numbers provided regarding the claims of speed et al of course

Darn the secret is finally out. I’ve been racing mtb Chinese carbon clinchers for 5 years now laced to road hubs. Same dimensions as these and just as light. Guess what. One quarter the price and just as durable.

Same internal width maybe, but I haven’t seen any of the same depth from a reputable Chinese carbon company.

Yeah, who makes a somewhat deep, carbon rim that has in internal width of 25mm? Nobody, YET. That said, I’ve sold plenty of ENVE wheels but I hate the fact that nearly every wheel I’ve taken out of the box has been out of true, some have even been over 5mm out in both directions. I expect that from junky wheels built on $15 rims but not rims that retail for around $1000 each.

Jesus, how many ways can manufacturers split a market? How many people are really riding roads that require 30 mm tires, and if so, do they really need an aero setup?

I take it you choose not to believe the data that wider is better?This part of the industry is driven by the needs of the pros, and wheels like these will be a staple in the classics very soon. Zipp should follow with their own product announcements fairly soon. I take it they’ve been working on disc-specific products and not just settling on the older Firecrest rim design…

Wider is better for rolling resistance. Once you get past 28mm tires, the RR continues to improve but the aerodynamic drag goes up a lot and obviously, the weight. Classics with cobbles are a different animal.

I’d say majority of riders in the UK and other countries with similar roads would be better off on 30mm (actual) wide tyres.

No speed penalty but comfort, grip, tyre lifespan, rim protection is in another leauge altogether .
Like many others you have been conditioned to believe in certain numbers 23, 25mm 100PSI… etc that marketers, pros and jurnos want you to believe are optimal.

BBB – I’ve been riding 35 mm tires all summer. Love them. BFFS, if I’m riding them, I’m not going to worry about aero drag. So sure, I believe in wider rims and tires (after riding 25 mm WAY BEFORE it became fashionable), but there comes a time when science and technology add NOTHING to the experience, and this is it. Or should we just put motors on the bike and forget about pedaling?

The tire+rim combo is more aerodynamic when using what ENVE proposes, but the gains are most likely marginal (“gain 2s over 1h at 40kph on gravel” though ENVE conveniently does not propose any data there).

Personally i’d rather have more grip and comfort than to save 2h under unrealistic conditions for example. Both while racing and while not racing.

I feel like ENVE, being able to manufacture any design on demand (while others have yearly contracts because it’s not made in house), just surf the marketing wave to see if this will stick with customers.