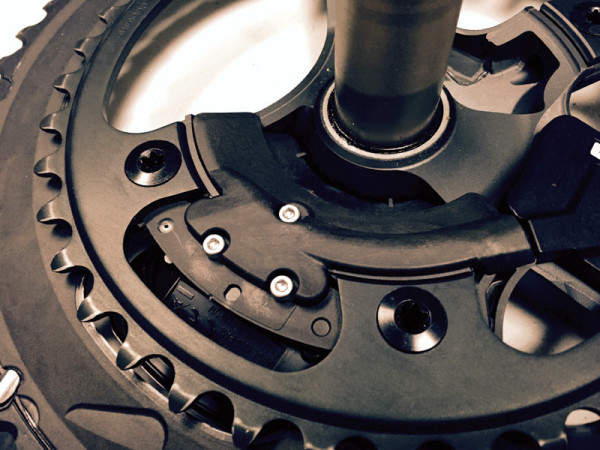 Earlier this year, Pioneer dropped the price of their premium powermeter system to just $999, making it a very enticing option if you already owned a Shimano Dura-Ace or Ultegra crankset. The discounted pricing came as a result of their continued refinement of the installation process in the Long Beach, CA, clean room facility.

Now, that refinement has spread to its hardware and software, helping the spider-mounted transmitter unit clear any frame and letting you easily switch between ANT and ANT+ modes on the fly.

Shown above, the new transmitter’s mounts sit flush with the small chainring, letting it fit any road, cyclocross or similar frame that would fit a Shimano road crankset. So, basically, all frames. Click through to compare it to the original design, and get the latest on their firmware updates… 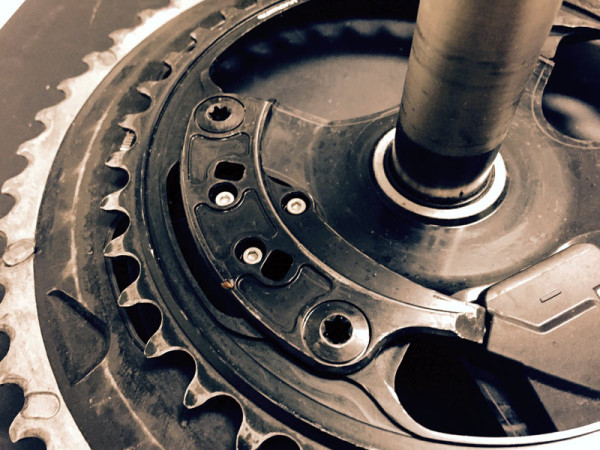 The original transmitter mounts protruded beyond the little chainring, causing frame clearance issues on some bikes.

The driveside transmitter now adds no extra width to the spider. It used to mount to the bolts for the small chainring and would add about 2-3mm of depth, which caused clearance issues with some frames. Now, the transmitter clamps to the spider inside of the chainring, adding no depth. In particular, this opens it up for use on the Cervelo P-series bikes and Pinarello’s Dogma F8.

Pioneer says they were the first to offer true dual leg measurement, and first to put the full spread of data onto the cycling computer for on-bike analysis. Sure, you’re mainly going to use all that info when you’re on the trainer (and hopefully not while riding outside!), or for post ride analysis, but it’s there in real time, all the time so long as you’re using Pioneer’s computer, too. 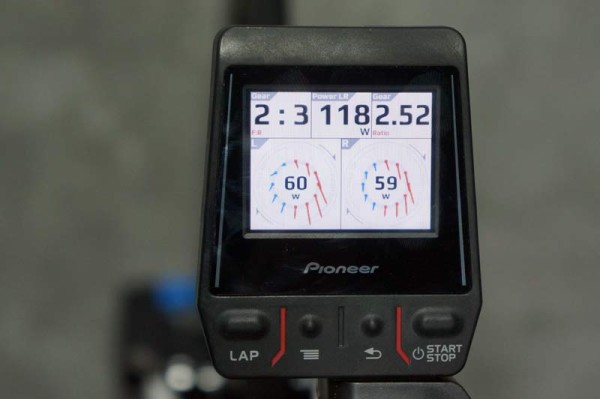 That’s because the transmitter pairs with their computer with full-featured ANT, not ANT+, which allows it to send more data. And there’s a lot of data being captured, with 16 different points being collected at each 30º of crank rotation.

Collectively, all of that data is now renamed HDpower Metrics, which helps make it a bit easier to grasp. That includes the dual leg power measurement, torque vector pedaling force and pedaling efficiency calculations. But that’s not the real news. The bigger story is in initial setup when using their powermeter with either your home computer or another brand cycling computer. Both of those would require ANT+, and both used to require a more labor intensive setup.

For anyone using another brand cycling computer, they used to have to remove the transmitter’s battery cap, push some buttons, and switch some settings to switch the Pioneer system to ANT+ mode because it shipped in full-power ANT mode. Now, Pioneer ships it preset in ANT+ mode, so all you need to do is put the magnets on the frame, pull the battery out and back in to start it up, then pair it as normal. If the lights are blinking, it’s paired and you’re ready to go. There are even new Youtube installation videos available that walk you through the installation and pairing process.

For those running the Pioneer SGX-CA900/500 computers on their bike but wanting to stream their power and cadence data into an online platform like TrainerRoad or Zwift, all of the setup information is now on front screen of their cycling computer, too, which lets you switch the transmitter from ANT to ANT+ while sitting on the bike. As long as your home computer will receive ANT+ signals, you’re good to go, then just switch it back to full ANT when you want the data back on your cycling computer.

The cyclosphere online experience now gets the mobile treatment, showing you all of the important info in a much more succinct, smartphone-friendly display.

You’re also able to post directly from Cyclo-Sphere to Facebook and Twitter, and those links take you to this screen, now, too. That makes it much more enjoyable for fans to see what you (or the pros) are doing when checking from your phone. And all of the data can be set up to automatically forward to TrainingPeaks and Strava directly after the ride.

Speaking of TrainingPeaks, starting September 15, Pioneer’s computers will start to show three metrics that had previously only been available to TrainingPeaks users, and you’ll get it whether you’re a TP member or not. Those include TSS (Training Stress Score), IF (Intensity Factor) and NP (Normalized Power). The latter is the ability to see your power metric without zeros, which is different than your average. The average will consider zero power output (like when you’re coasting downhill), but NP shows only the power when you’re pedaling and will generally be higher and show more accurately what you’re putting out on a ride. Those new metrics will show up on the cycling computer and in the cloud on Pioneer’s Cyclo-Sphere.

Normalized power isn’t simply the power without the zeros; for NP every power data point recorded is raised to the forth degree, the mean is then found of all the data points^4 , the forth route of the this mean is normalized power!

“16 different points being collected at each 30º of crank rotation” but they need magnets to measure cadence?

^whats even funnier is 16 points doesn’t equal 30degrees, 12 does

all criticism aside… these are reasonable priced for people who already have a crankset they wish had power. Im not how they compare to the gold standard SRM but i am kind of interested…

@john given that you need to mount the magnets on both sides and that distance from the BB has to be very precise, I think the magnets are there to provide more accurate angular velocity for the crank arms and positioning for multi point torque measurements.

DA and Ultegra are hollow bonded. See those seams? This allows thinner metals to be used in those cranks. 105s are still hollow forged, and the back of the crank is entirely different.

@James Normalized power is [taken] on a rolling 30s average, THEN taken to the 4th power. Then the average of those points is taken to the 4th root. The 30s averaging is what causes many people to mistakenly think that it is removing the zeroes.