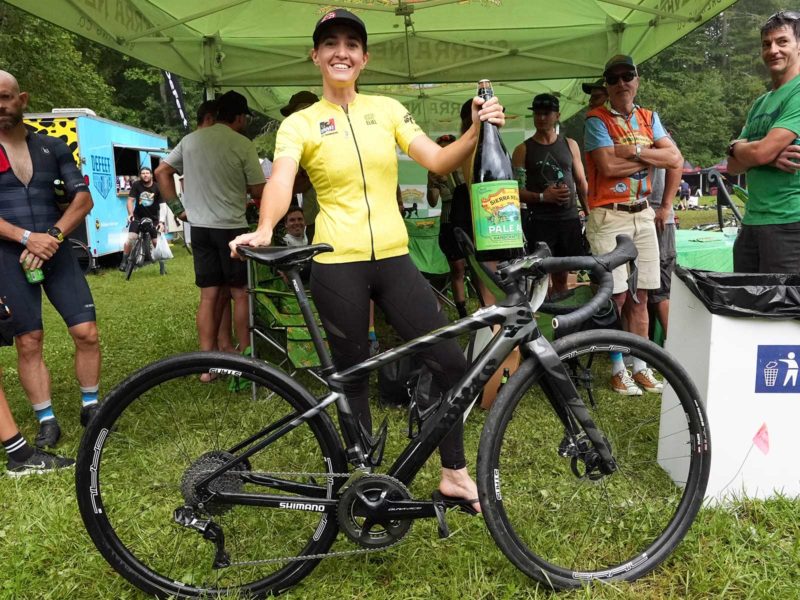 The CLIF Pro Team has had quite a year, and nabbed two podiums at the inaugural Belgian Waffle Ride North Carolina. Sofia Gomez Villafane, who raced to 23rd at the XC Olympic Race, went on to get 9th at SBT GRVL the weekend before, then took the top spot against an incredibly strong field (with more Olympians!) of women at BWR…while on a borrowed bike!

Meanwhile, teammate Russell Finsterwald took 6th at SBT, then moved up a spot to 5th at the BWR. They’re sponsored by Specialized, Easton, and Stan’s NOTUBES, too. Oh, and technically, they’re a mountain bike team, and Sofia doesn’t even have her own “team” gravel bike. Here’s a look at their race bikes… 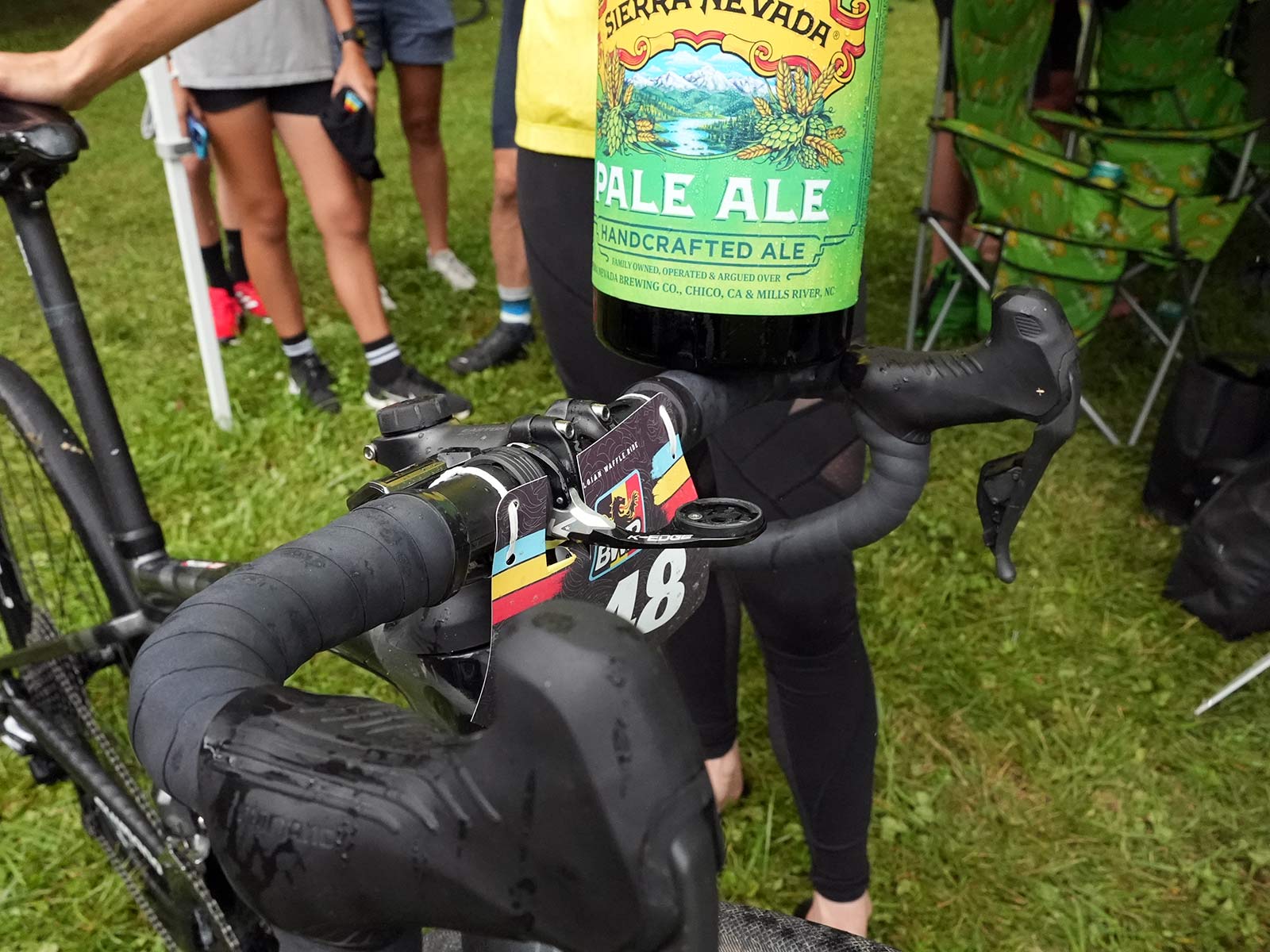 The giant Sierra Nevada Pale Ale was one of the prizes, along with a nice fat check.

Borrowed from Katerina Nash, the only change to the bike was a longer Niner RDO carbon seatpost since Sofia’s a bit taller…Nash rides a 49, the smallest Diverge frame size offered. Otherwise, it worked out quite well with her teammate’s build. 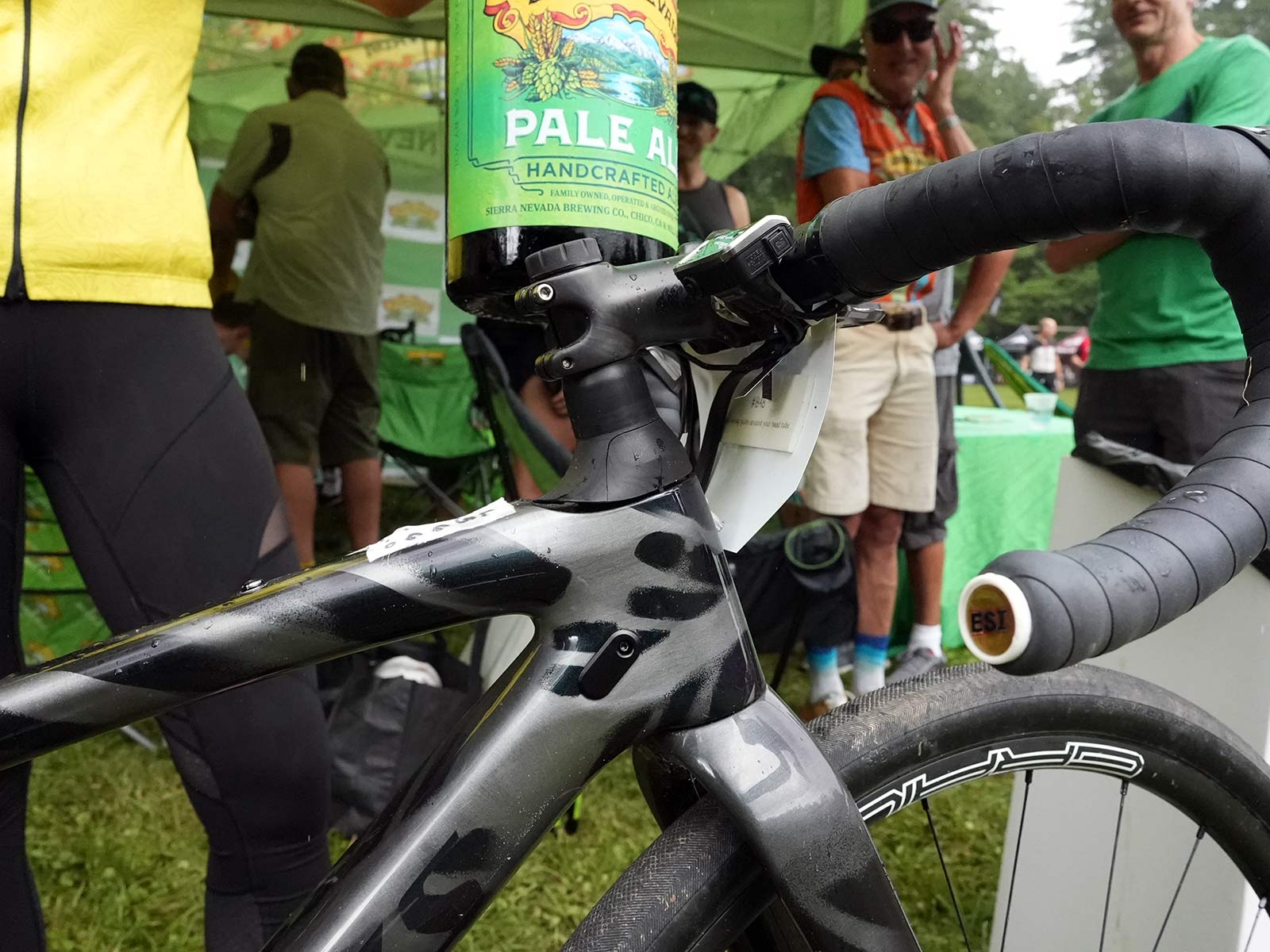 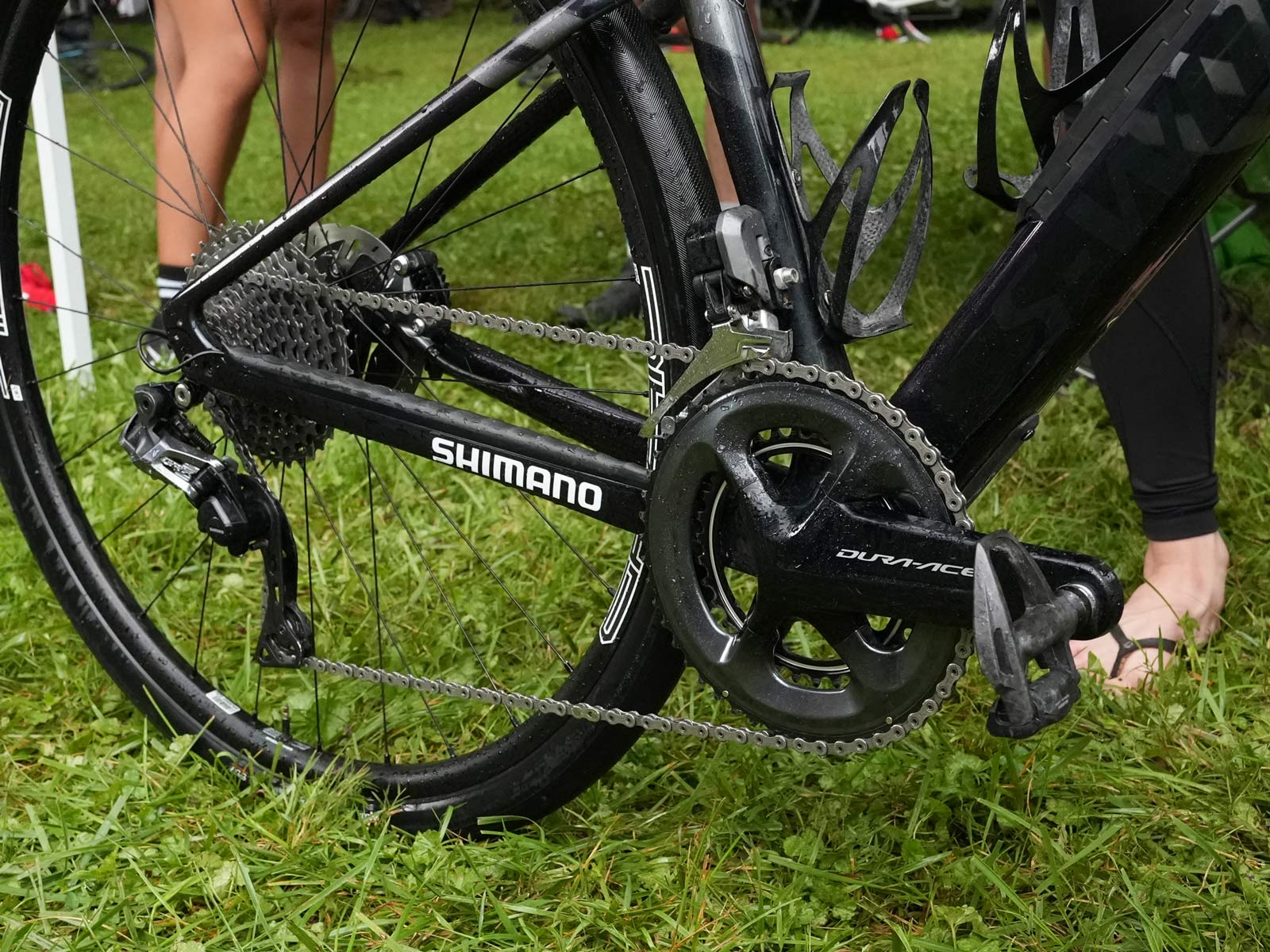 Her drivetrain is a 50/34 Dura-Ace crankset with 165mm arms paired with an 11-speed XT 11-40 cassette. GRX Di2 derailleurs and shifters move things through the gears. Like most every pro (and many age groupers), road pedals were far more common than MTB pedals for this event. 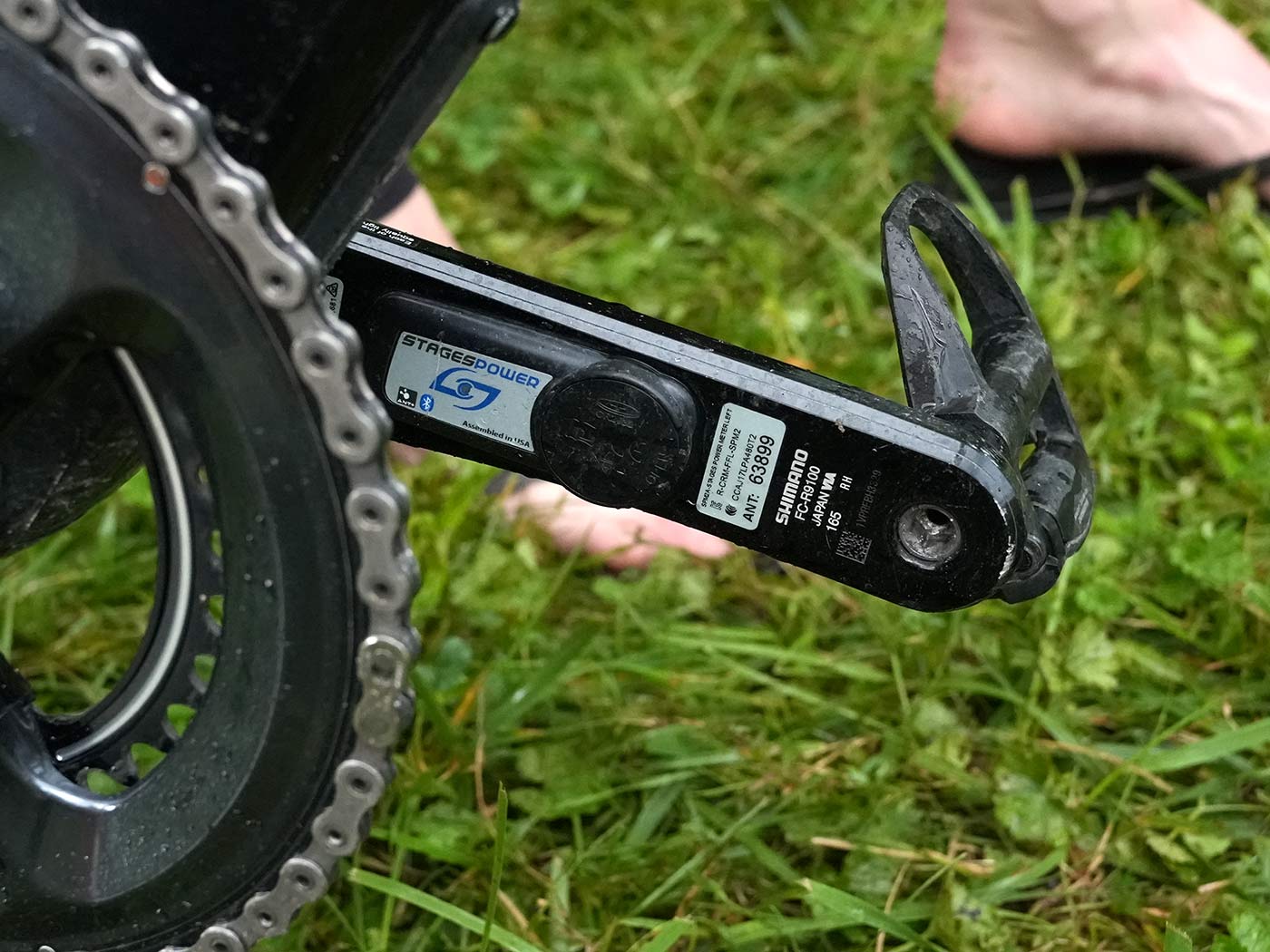 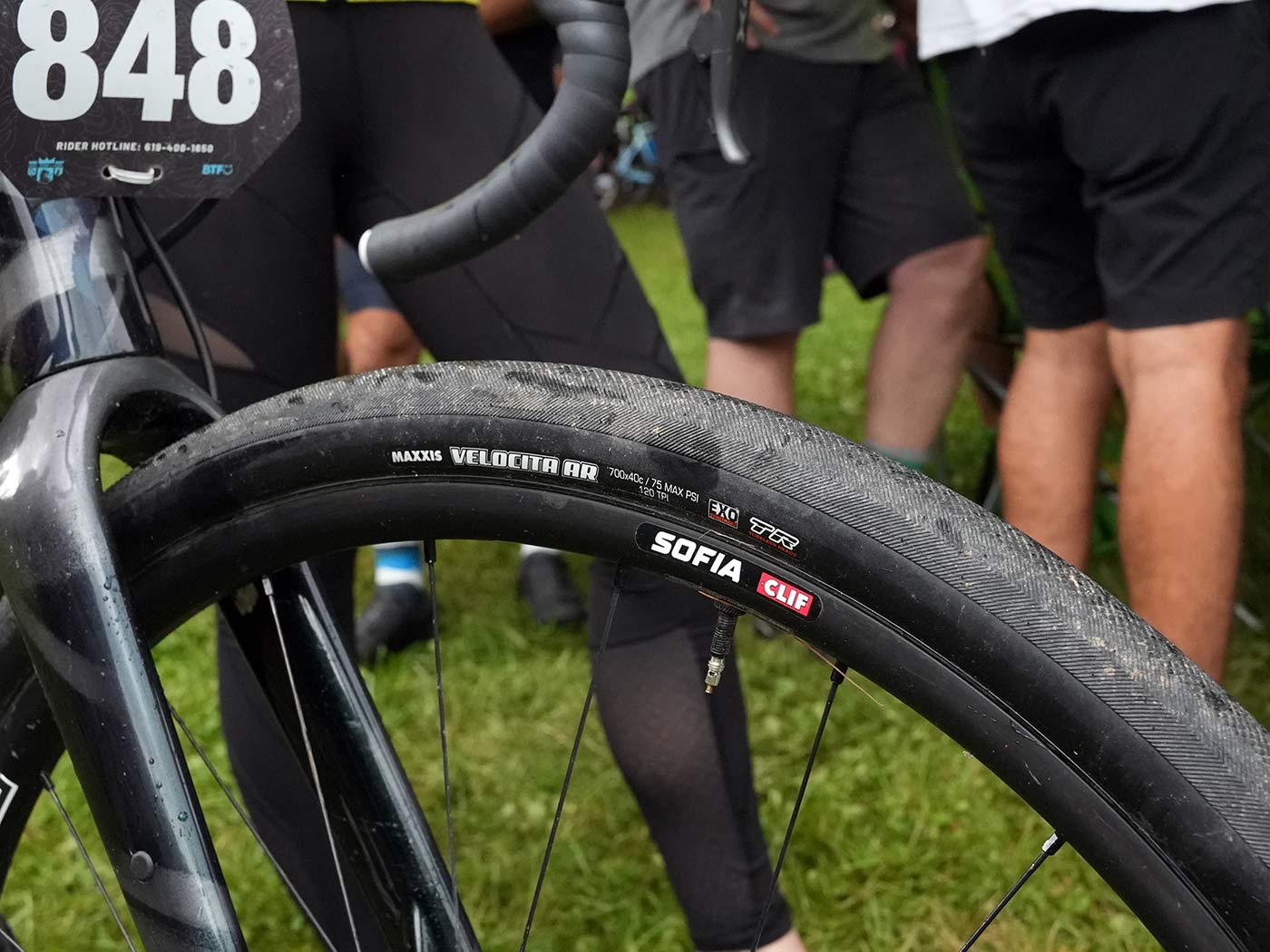 A Specialized Mimic saddle finished off the build.

The numbers on her top tube were the mile markers for the aid stations…which she didn’t use. Sofia told us she raced straight through without stopping, made possible with two bottles on the bike plus a hydration pack. Her finish time was 5h 17m 11.70s…almost exactly two hours faster than yours truly. 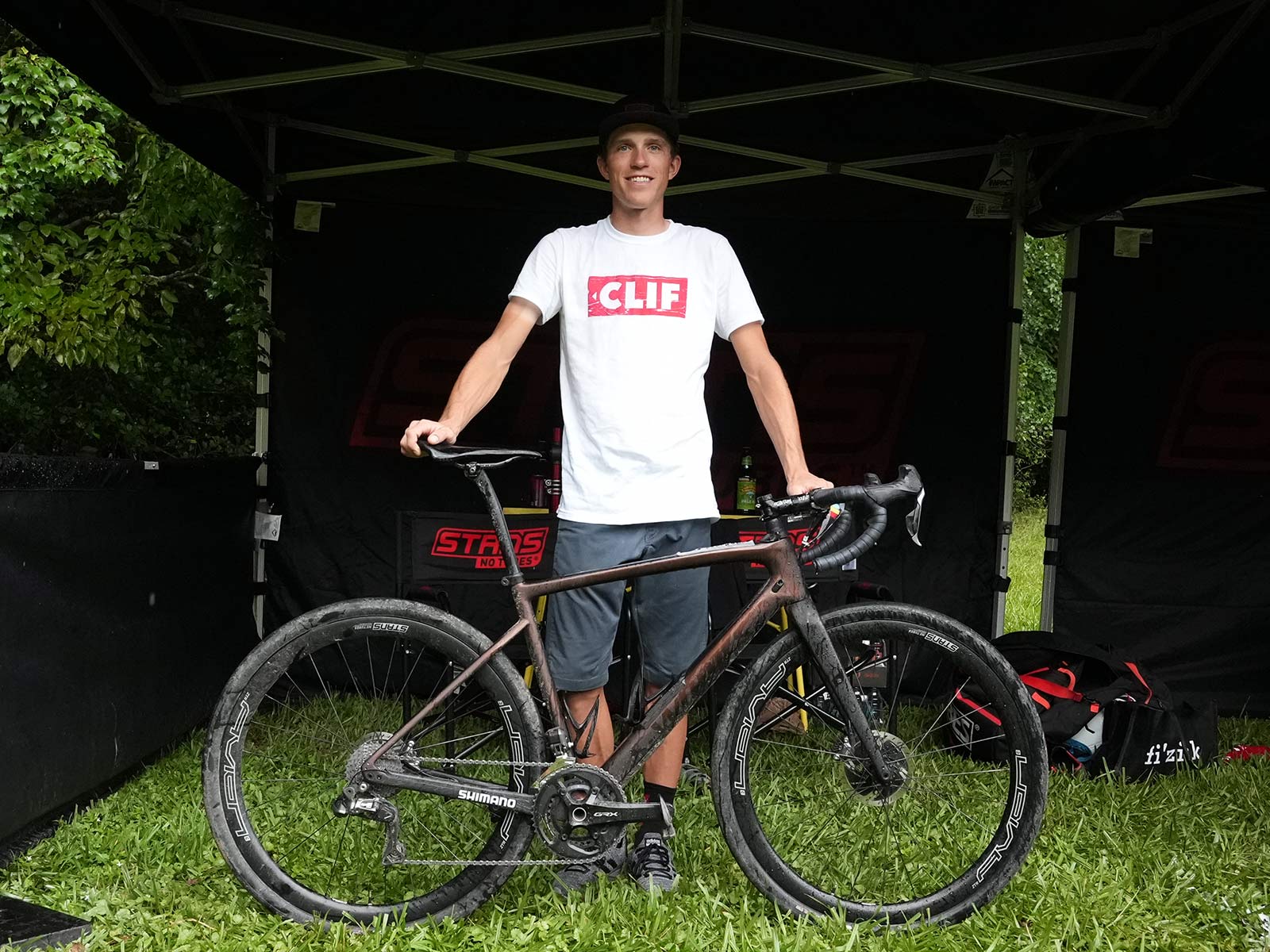 Russell’s bike is a size 56 Diverge but with different parts selections from their sponsors’ parts bins.

The seatpost is a Specialized post that looks kinda like their Roval Terra flex seatpost, but possibly with a bit different shaping at the top. It caught our eye in the pits, but was quite muddy…and unfortunately our pics didn’t reveal anything special, so it could just be the shadows. Maybe. 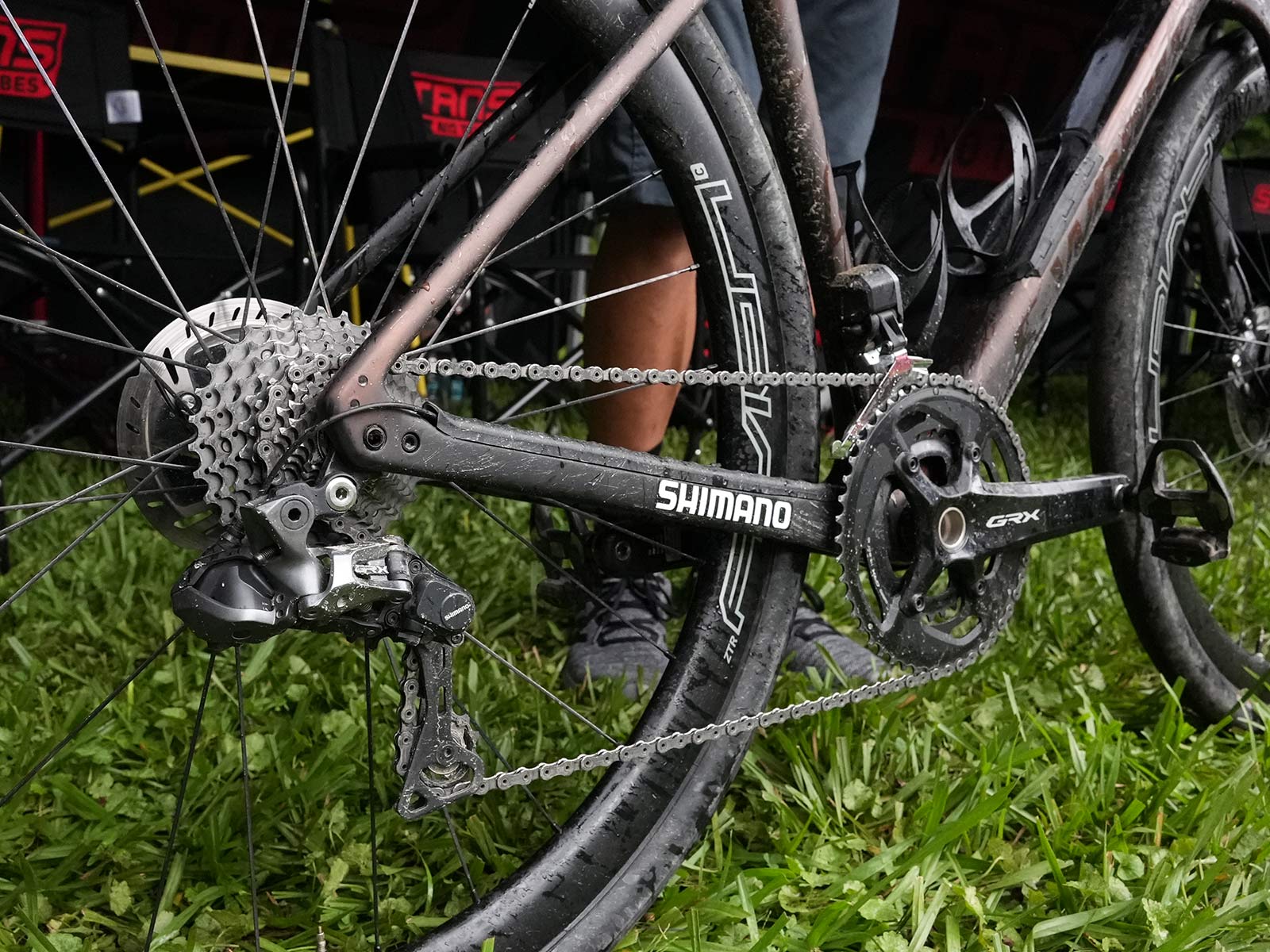 Where Sofia had road parts on the front and an MTB cassette out back, Russell flipped it around. 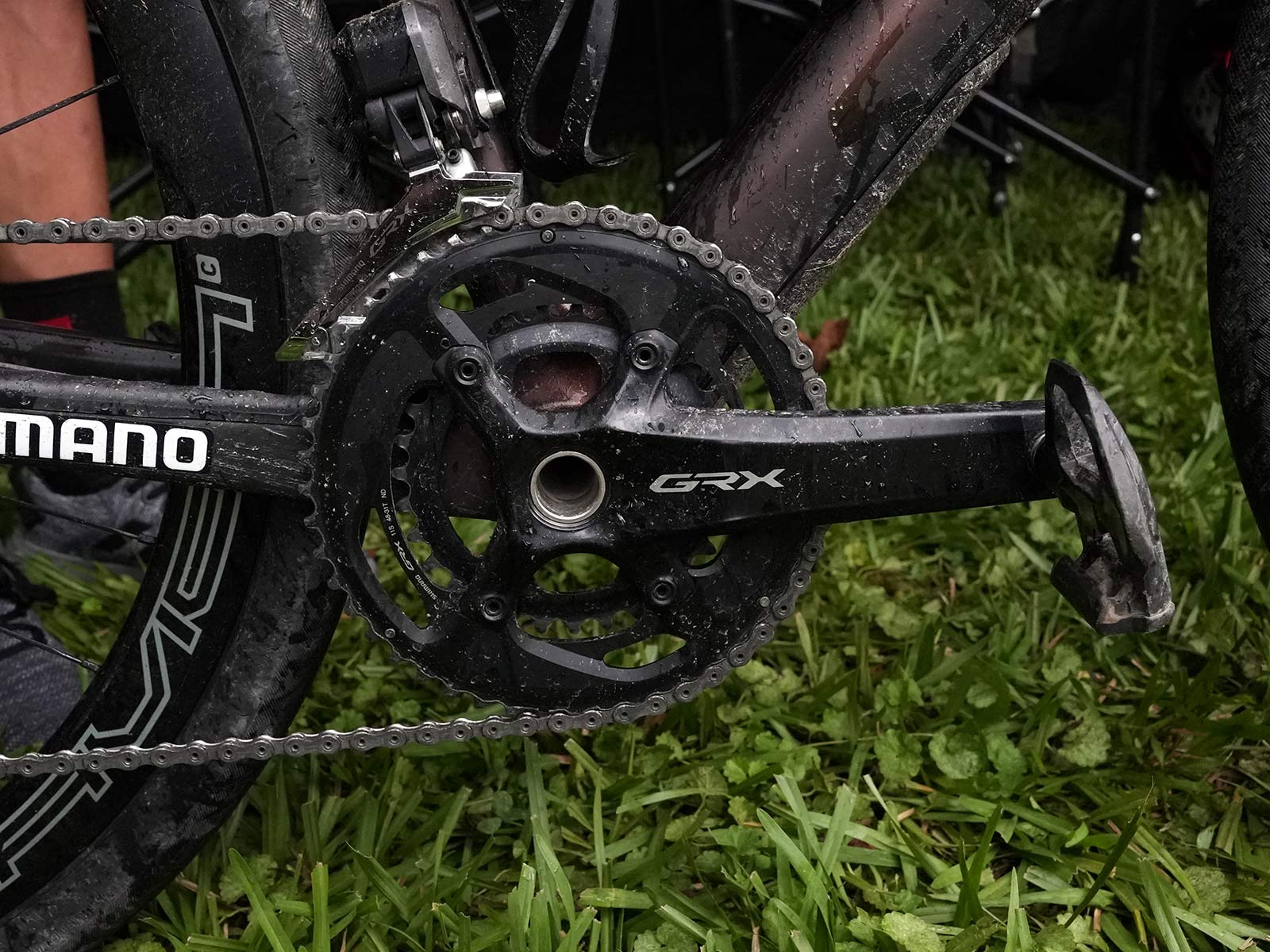 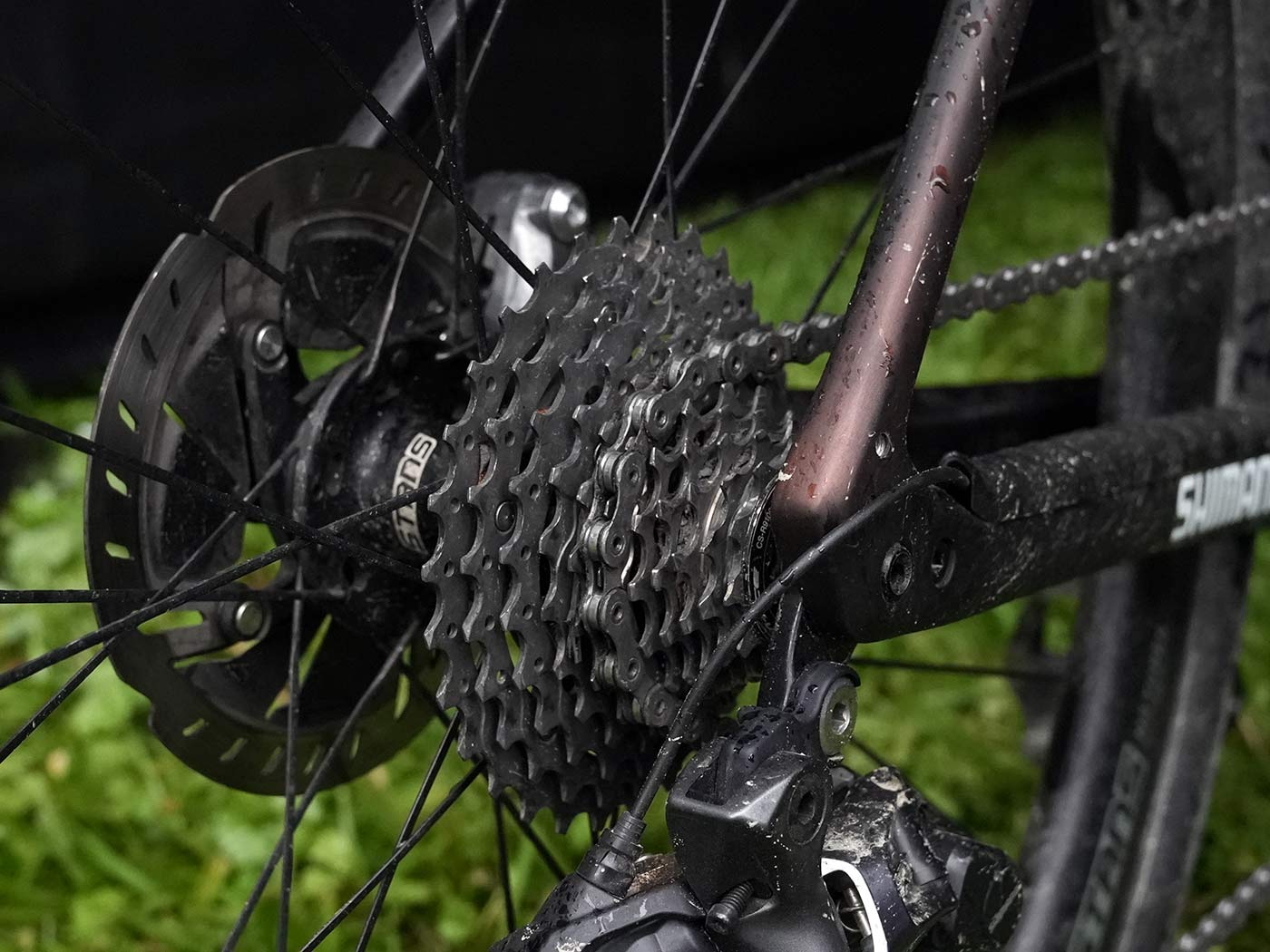 …with a Dura-Ace 11-30 road cassette. Shifters and derailleurs are GRX Di2. 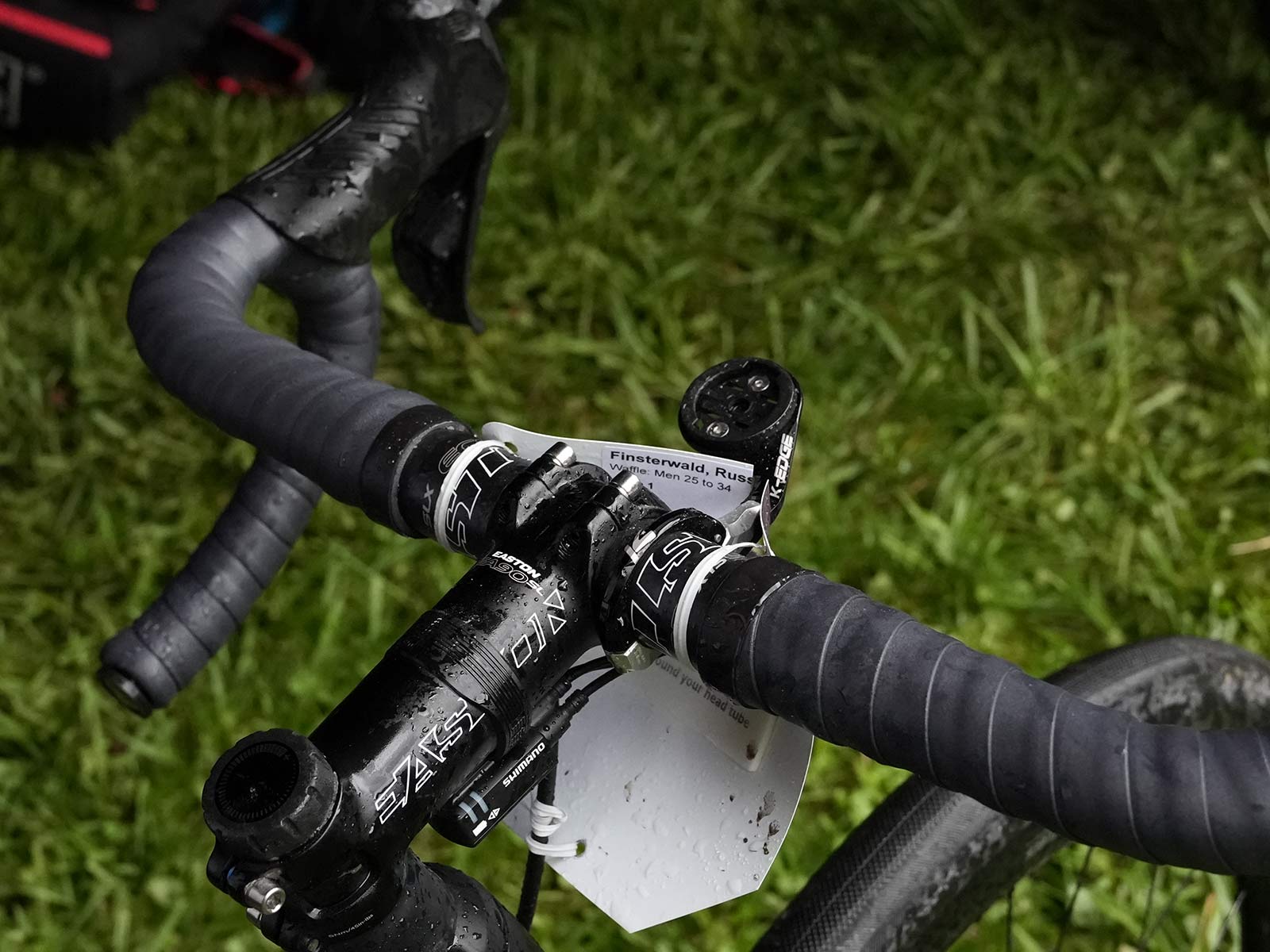 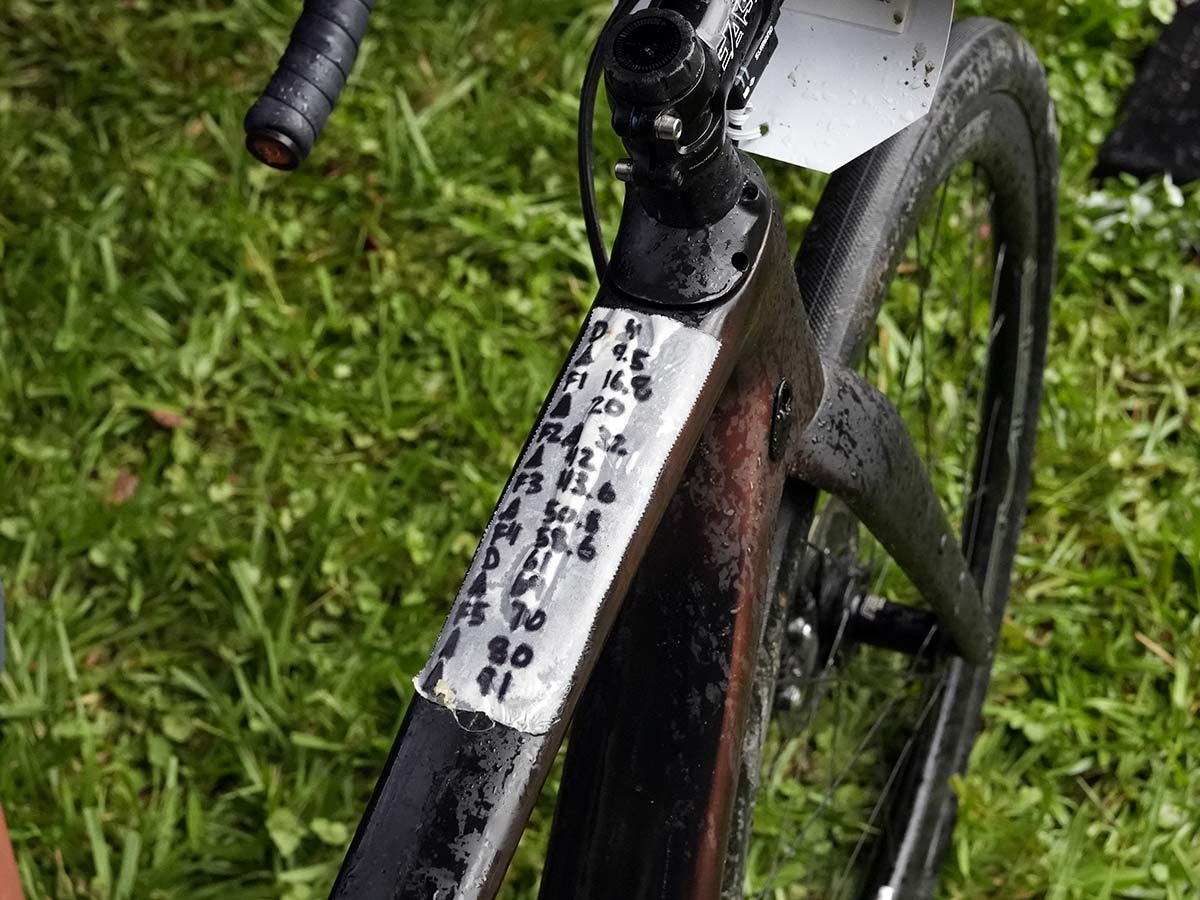 Based on his 4h 46m 7.76s finish time, I’m guessing he didn’t stop either, but he added the mile markers for the major climbs and breakaway points on his top tube cue sheet.

Saddle is the Specialized Phenom S-Works with carbon rails, and bar tape is also ESI with a K-Edge mount off the front. 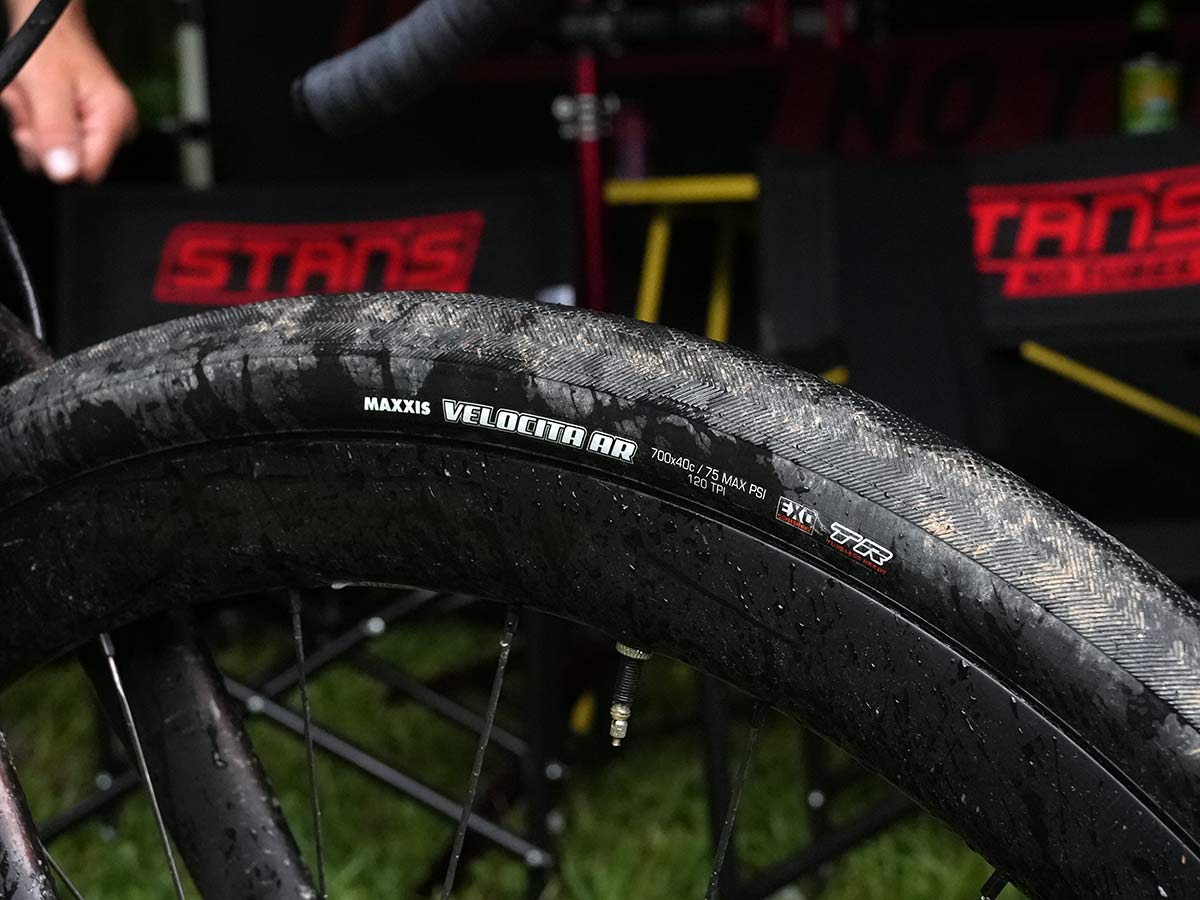 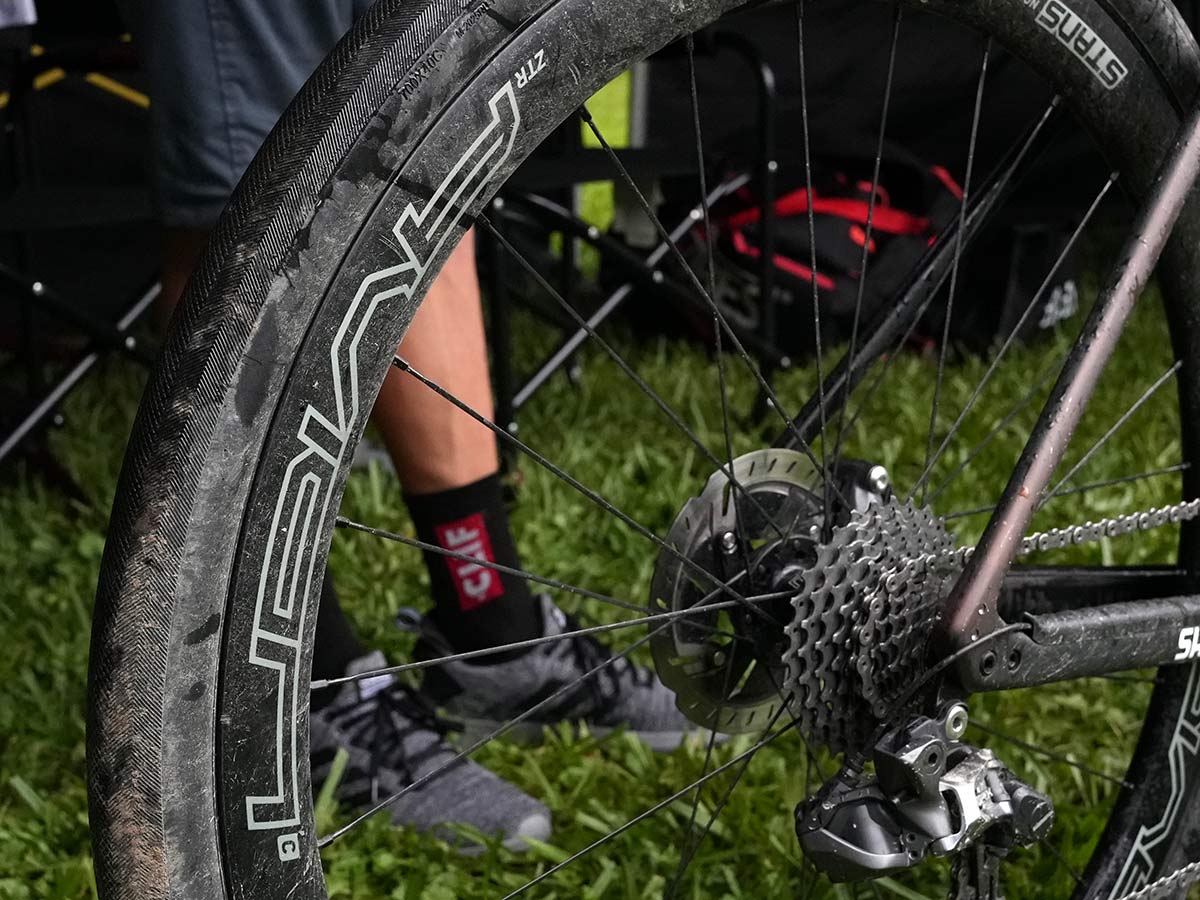 …but they’re on Stan’s deeper profile Avion carbon wheels. These are still rated for gravel and cyclocross, too, and have a wide 22.3mm internal width and 40.6mm depth and are designed to absorb impacts well to keep you rolling fast.

Unfortunately, these wheels have been discontinued. According to our source at Stan’s, they say the molds “met an untimely end, and retooling during COVID hasn’t been easy.” So, for now, the Avion wheels are gone from the lineup. 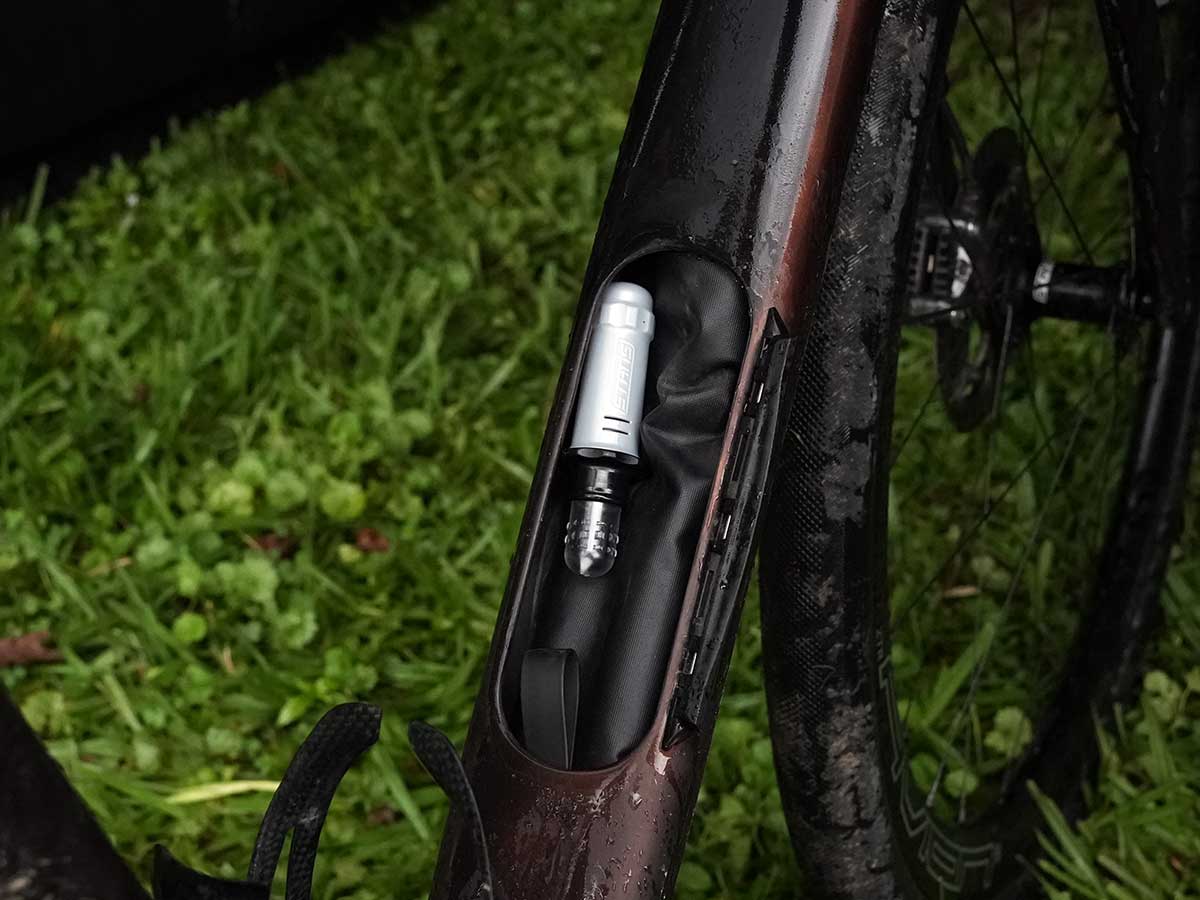 Inside his SWAT compartment is the usual tube, tool, etc., plus a Stan’s DART tubeless tire plug kit.