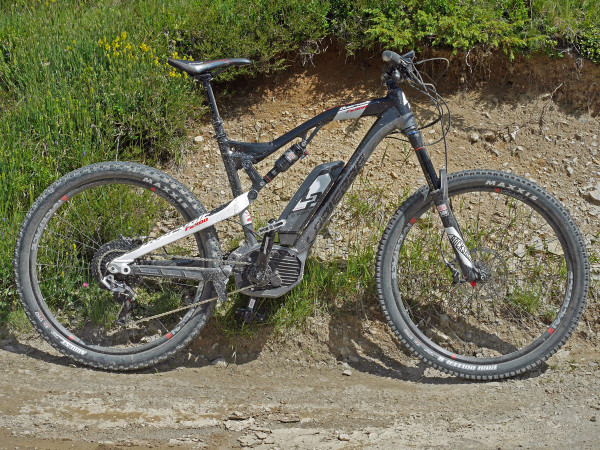 Photo from the LaPierre Overvolt launch

The Salzkammergut Mountain Bike Trophy is a grueling 211 km race that is Austria’s biggest MTB marathon celebration. With additional distances of 22, 37, 53, 76, and 119km almost no one is left out – especially when you add in the Unicycle Downhill, Unicycle Marathon and 60 km All Mountain Marathon. Perhaps it shouldn’t be surprising then that one of the newest disciplines for the mountain bike festival is the E-Bike Trophy.

That’s right. Just like the Sea Otter Classic, there will be a race specifically for E-Bikes. According to the Salzkammergut site, the race will take place on a separate 36 km route that will include 1,180 meters of climbing. Only three sections of the total distance will be timed with two climbs and a final section of technical singletrack making it almost like an E-Bike Enduro (E-nduro?). Race promoters envision it as a challenge of conserving battery life during the non timed sections, while demanding riding skill to go as quickly as possible during the three stages. Battery changes are not allowed and bikes will be limited to “commercial mountain bike pedalecs” (no throttle) with max 250 watts and limited assisted top speed of 25 km/h. Along with the E-Bike Trophy, there will be E-Bike demos and tours of the mountains of Bad Goisern during the festival weekend.

Bikerumor what’s up with all the motorbike coverage? Are you powerless against the bike industry or do you really like the idea of motorbikes disguised as mountain bikes?

Eh, it is a commercial product race. Think of it like the FIA ETCC

Yeah, WTF bike rumor? Have you become another shill for the e-motorbike industry. Loss of integrity at the first sign of $$$$, how very American.

I think a long distance e-bike MTB race could be interesting. Run out of juice and you have to pedal your 50+ lb monster. Go for more battery capacity and you loose maneuverability.

…and so it goes where the $ flow. Ebikes putting the “E” in Enduro Thumbs down, way down.

Also in other news, at the motorcross nationals they are handing out a non-motorbike trophy. Crazy world.

Please stop with the motorcycle coverage.

This is awesome, E-bike races will open up whole new segments of bicycle sport.

Thanks BikeRumour for posting this article. I for one am interested in E-bike news.

Seriously people, chill out. As long as it still has pedals on it (and better yet, doesn’t have an internal combustion engine), most people who read this blog will still be interested. If you’re not, stop complaining and don’t read it.

If it’s such a letdown that a portion of mountain biking energy has become assisted by an electric motor, where was the outcry when a big portion of it became heavily assisted by gravity? It’s still fun on two wheels, and it’s nearly all the same tech. That’s what some of us look for.

@Mike: If you stopped reading after E-bike trophy, then why did you take the time to make a comment about not reading. Just stop reading and move on. You aren’t required to click on anything that doesn’t appeal to you. All of us know that there is great resistance to E-mountain bikes, so I guess I’m just tired of hearing a bunch of people sounding off like grumpy old men when it shouldn’t have any affect on their ability to ride. It’s a weird race at a bike festival for fox sake. It’s about celebrating something that makes us happy. If I end up hitting up Sea Otter 2016, I will probably end up watching the E-bike race just for the giggles. Lets face it, the road race is boring to watch. I’m still not going to buy an E-MTB; but if someone else uses one to get out in nature then good on them. My opinion shouldn’t be what changes someone else’s vision of what they want to do.

@OFfCourse “… when it shouldn’t have any affect on their ability to ride.”

But it does. Call me a grumpy old man all you want, but this constant drumbeat for ebikes will affect your ability to ride. If you can’t see the forest for the trees, then enjoy further trail access restrictions while you hike (or ride a horse), because you’re not going to be doing anything in the woods on two wheels.

@ Mike..You are right.
We need to group e-bikes in with motorcycles. They can have access with them.
I have had motorcycles, snowmobiles and Jeeps.
Some of the argument relates e-bikes to shuttling. When I go to a shuttle area I am aware of the direction to ride trails and that I could encounter fast downhillers. Do you think Equestrians are prepared for 25km/h e-bikers on flat and uphill trails.
If we group e-bikes in with mtb then we are going to have trail access issues.

Ohh, a motorbike story. If you are gong to keep doing stories on two wheel things with motors then how about the latest from Yamaha, Husqvanna and such?

Is ebike rumor trying to lul us into a sense of these being okay? That is despite what is obviously bad sentiment among readers.

@onion. Get real. Gravity is not a motor on your bike. Gravity is a natural part of our world and impossible to do anything in cycling without it. Cognitive Dissonance.

Be interesting to know how they propose to check the max 250W & assisted top speed of 25 km/h.

Fully convinced the bikerumor is sponsored by ebike companies as well as sea otter and the rest.

Ebike is the first tear down of everything we have worked so hard for. Gas powered bikes are next. Remember moped? They had pedals and we’re not considered bikes in the eyes of the law.

Ebike will ruin our trails.

I smell an NOx@VW innuendo… 😉

PS
Anyway, guys, do you remember the following quote?

“Leo Getz: No no, it’s okay, it’s okay, you are my family, you are my friends… you are not better friends then froggy, you are just different, and eh, I just thought that maybe that might be relevant… okay I leave you alone now.”

E-bikes are not worse or better than yours full-sus, Di2, RED eTap (soon, I suppose) or fat (& heavy!) bikes. They are just different.
Different than those you ‘ve got accustomed to.

Again, I can imagine that years ago there were hikers who wanted to ‘took a hike’ with what-is-now-a-standard mountain bike on THEIR trials.

All I’m saying is, from an energy perspective, doing a downhill run and taking a chairlift back to the top is pretty darn similar to motoring back up. Just let people have fun on their different flavors of two wheeled mechanisms with pedals, and don’t criticize this website for its coverage of the current state of the art, whatever it may be.

Have some faith that the technology won’t be abused to take your fun away too, and imagine all the more people now able to get out there and do things outdoors they otherwise wouldn’t. I won’t be partaking in any of this, but I’m not getting angry at it. Things change and evolve, and we deal with them. Otherwise we’re just jerks.

They are quite different. Normally at that “extra stuff” whether suspension, electric shifting or suspension must be propelled forward with thy legs. Add a motor and it is a motorbike.

Mortimer,
I am not going to split hairs (as all pros and cons have already been presented here and there), but…
As far as I understand the problem, e-bikes have no advantage during descents. They help to climb higher/further/easier (so the problem actually consists in that more people are expected to use trials and, subsequently, to bulldoze them faster).

But – as Onion noticed above – people already use chairlifts. Others use their gasoline-powered pick-ups to avoid pedaling to the trials.

PS
I joked a few days ago: what if at home you have a pedal-powered charger for your e-bike? Isn’t it yet another kind of energy transfer/cumulation like the energy-bars in your backpack?

The guys from GCN have just quoted this:

“I still feel that variable gears are only for people over forty-five. Isn’t it better to triumph by the strength of your muscles than by the artifice of a derailleur? We are getting soft… As for me, give me a fixed gear!” — Henri Desgrange