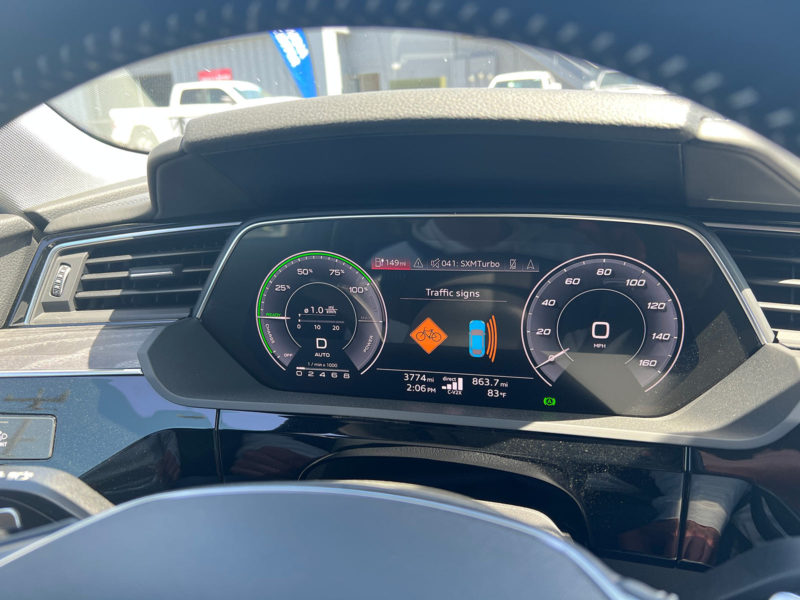 One of the big challenges in getting more and new cyclists on the road is safety concerns, particularly getting hit by a car. Spoke Safety is building out the tech to reduce that risk, creating a safer road for all users, but with particular benefits for Vulnerable Road Users (VRUs) like cyclists, by letting cars and bikes communicate with each other.

And, importantly, they can talk without relying on cellular signals or GPS.

We’ve seen some solutions in the past, like Garmin’s Vario on-bike radar that alerts the rider to cars coming up from behind. And in-car systems from Volvo and POC, haptics alerts from Jaguar, or combined app-plus-car transmission technologies, too. The problems with many of these are that they were brand-specific, required active motorist adoption and usage, or relied on cell signals, which are too slow and erratic.

The B2V system mentioned in 2021 was a closer step in the right direction, and has (had?) great bicycle industry support, but the range is limited.

Now, Spoke has a solution that has massive range, uses existing technology, is able to fit on a bike, and already has Audi on board. Here’s how it works… 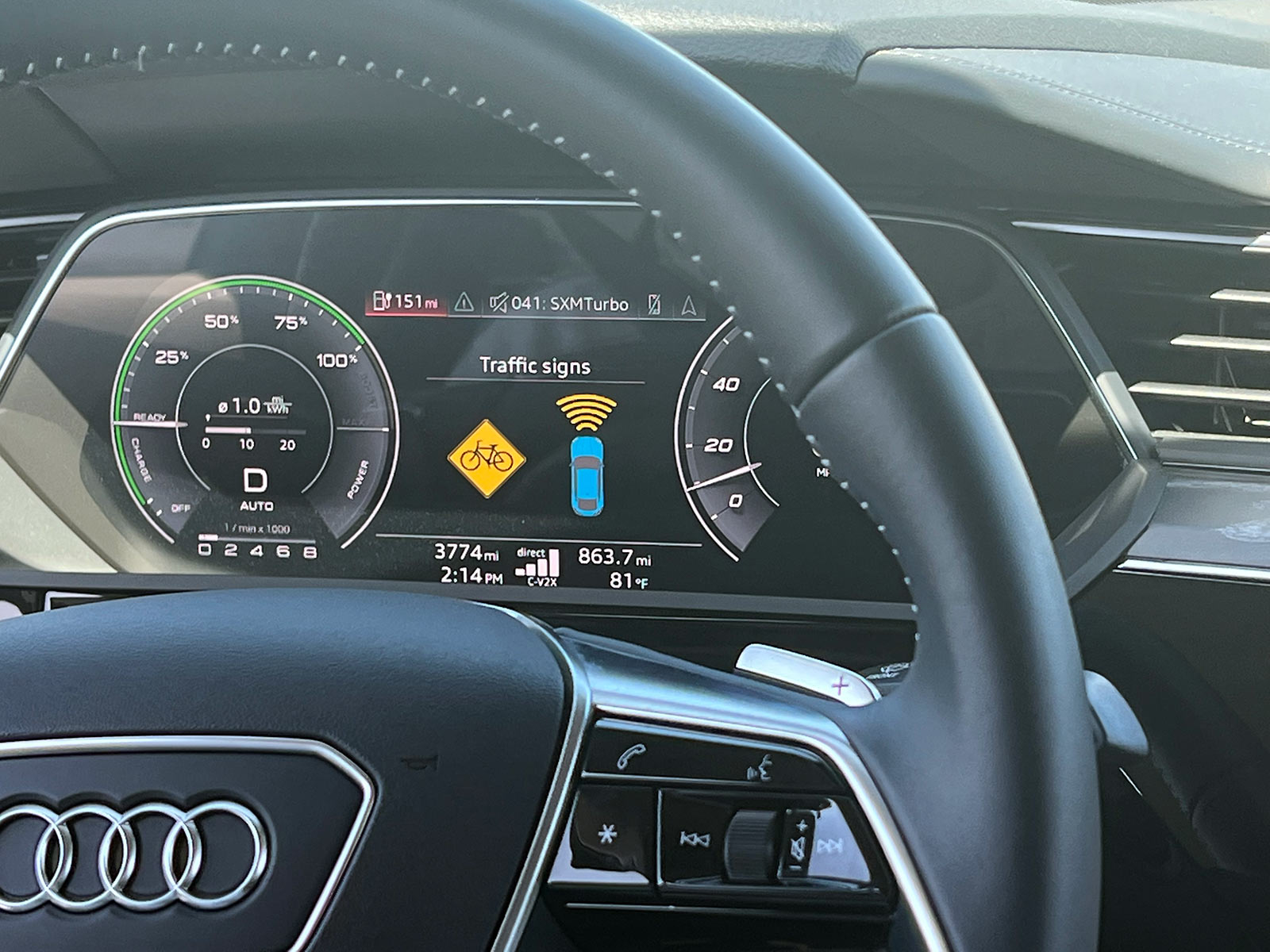 Using C-V2X tech, the hardware lets bikes talk to cars AND cars talk to bikes. And, it happens 10x per second to provide real-time location far more accurate than just using GPS on your phone. While it doesn’t rely on cellular data, the in-car devices are connected via 4G/5G via a Qualcomm chip and Telekom/T-Mobile service, which further expands their range.

That range pushes well past Bluetooth or WiFi, it gives drivers 10+ seconds of heads up that there’s a rider ahead, even if they’re over a hill or around a corner and not in direct sight. So, a driver might see an alert like the one shown above well before they can actually see the cyclist, giving them ample time to slow down (and look up from their texting). 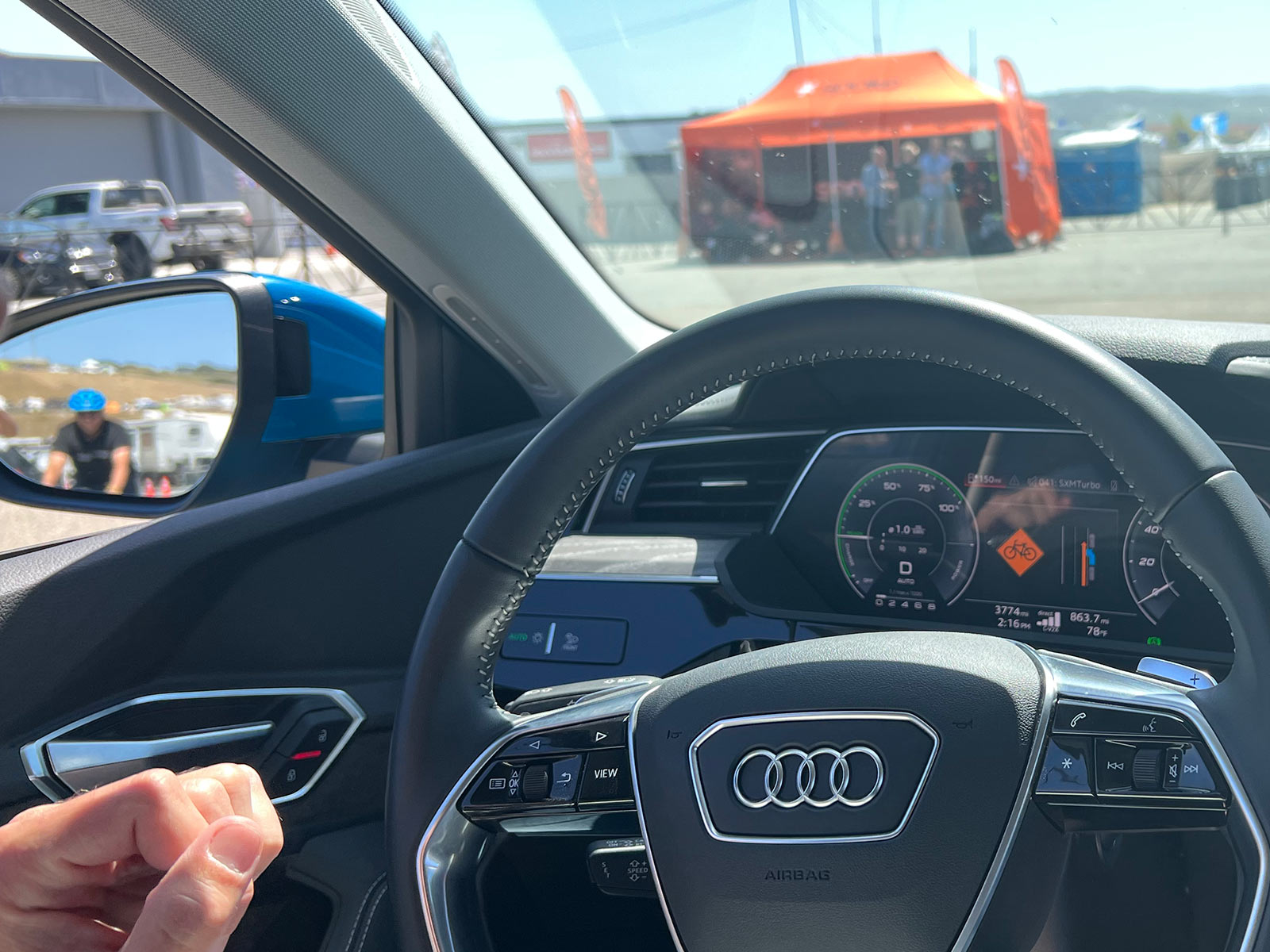 It can also tell a parked car if there a rider is coming up from behind, and from which side, with enough advance notice so they can wait to pull out of their spot…assuming the driver puts on their turn signal (at least, as shown).

That last part is key in some situations. The system is tied into the car’s controls and front camera, so that it can know what the driver is doing (or wanting to do). So, there will be situations where it may not always work as intended, but generally speaking, it aims to let drivers know when a cyclist (or other VRU) is approaching or being approached. 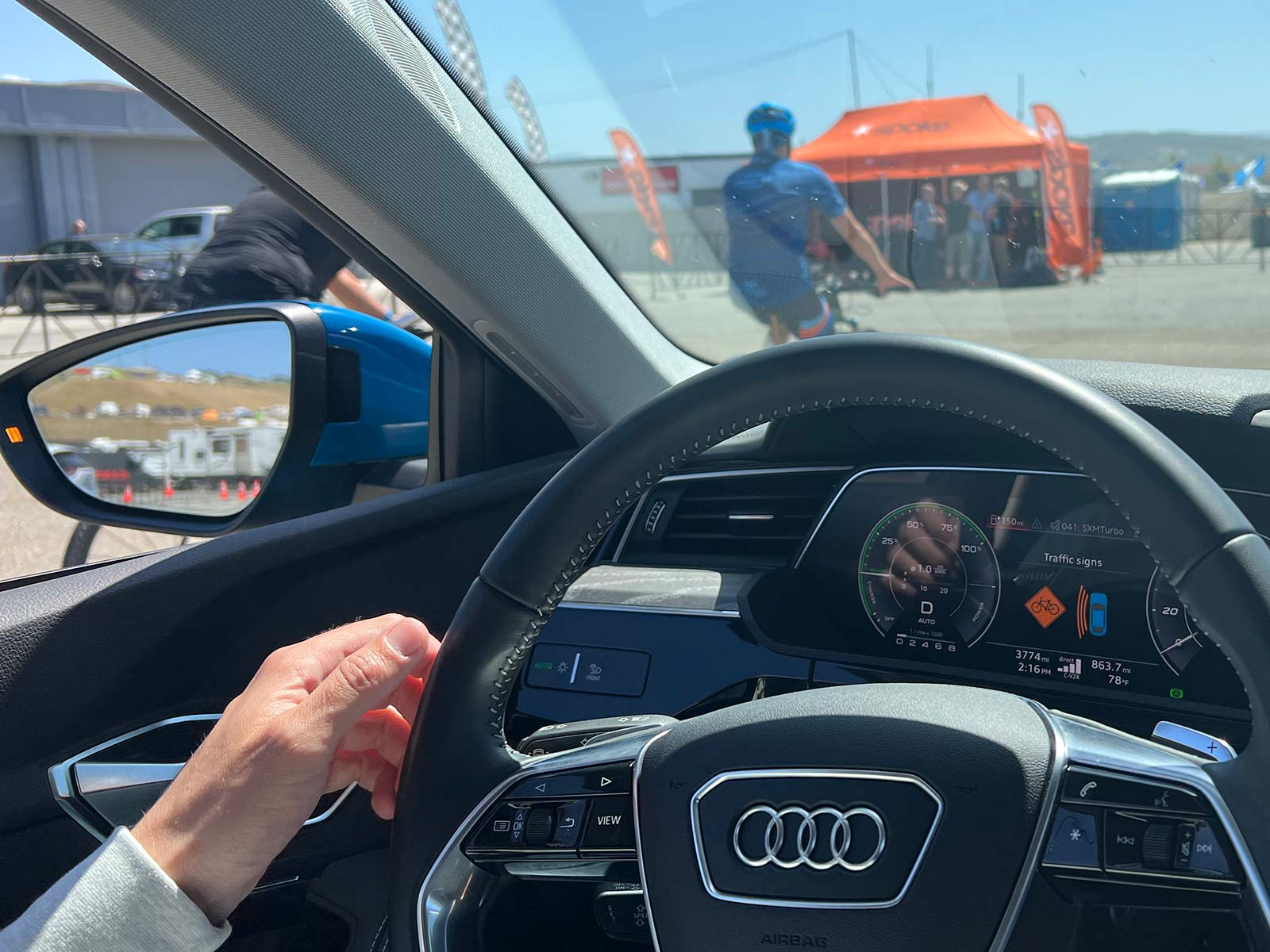 The alerts change based on the rider’s position, helping the driver know when a cyclist might be riding alongside them in their blind spot.

It even knows if cyclists are coming down a side street, giving them a heads up that they should be aware as they enter an intersection. Basically, it lets cars know where bikes are… 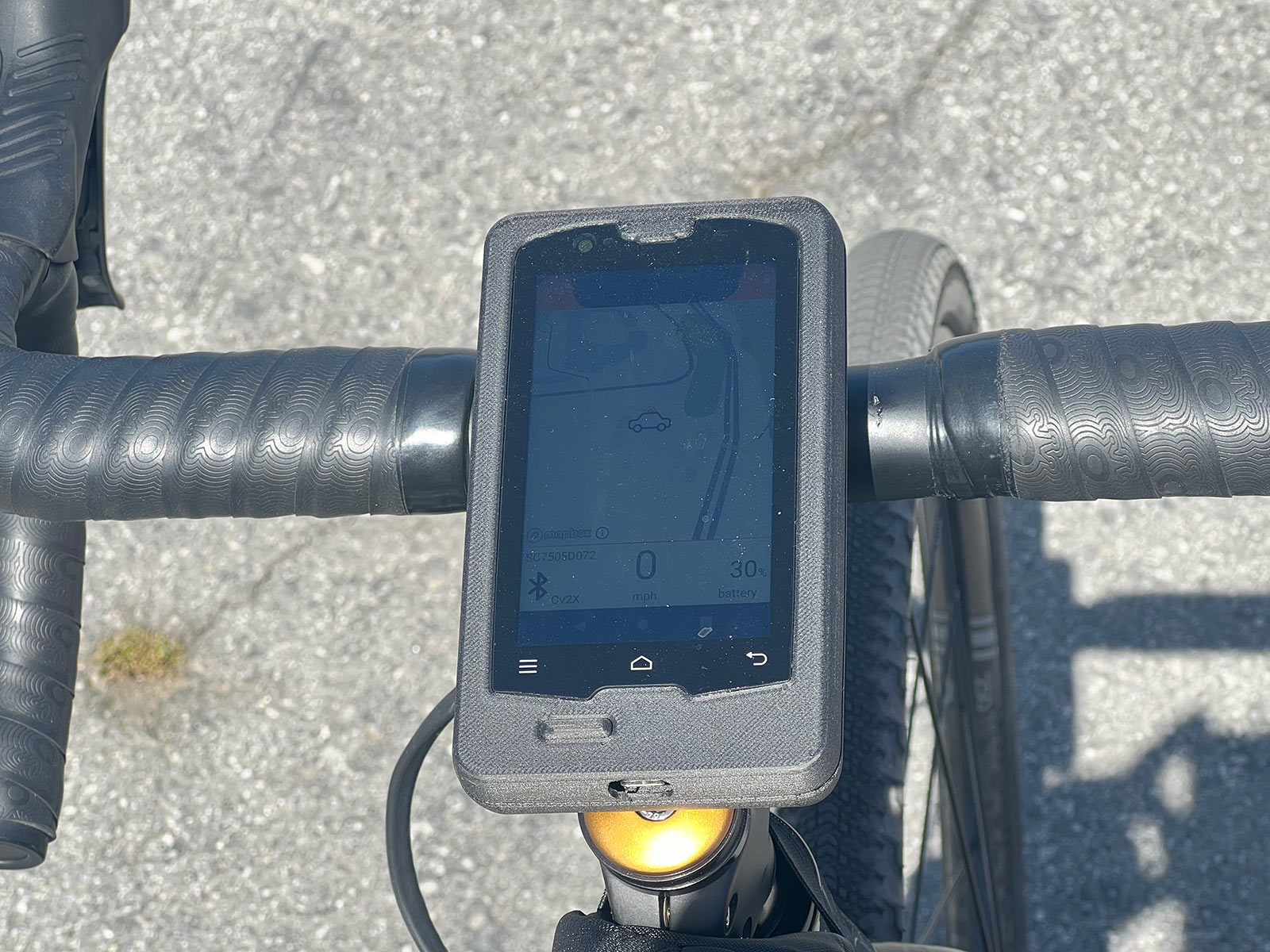 …and lets bikes know where cars are. Because of the positional accuracy, riders will now be able to see cars coming up from behind or up front, or from side streets.

This is the real secret sauce for Spoke, that they were able to miniaturize the technology. Not shown is the small transmitter that’s held flat under a water bottle on a custom cage. Neither that nor this cycling computer are the final form factors, but compared to the loaf-of-bread-sized device that’s in automobiles, it’s a practical form factor for cyclists that could easily be integrated into the frame, a tail light, saddlebag, etc. 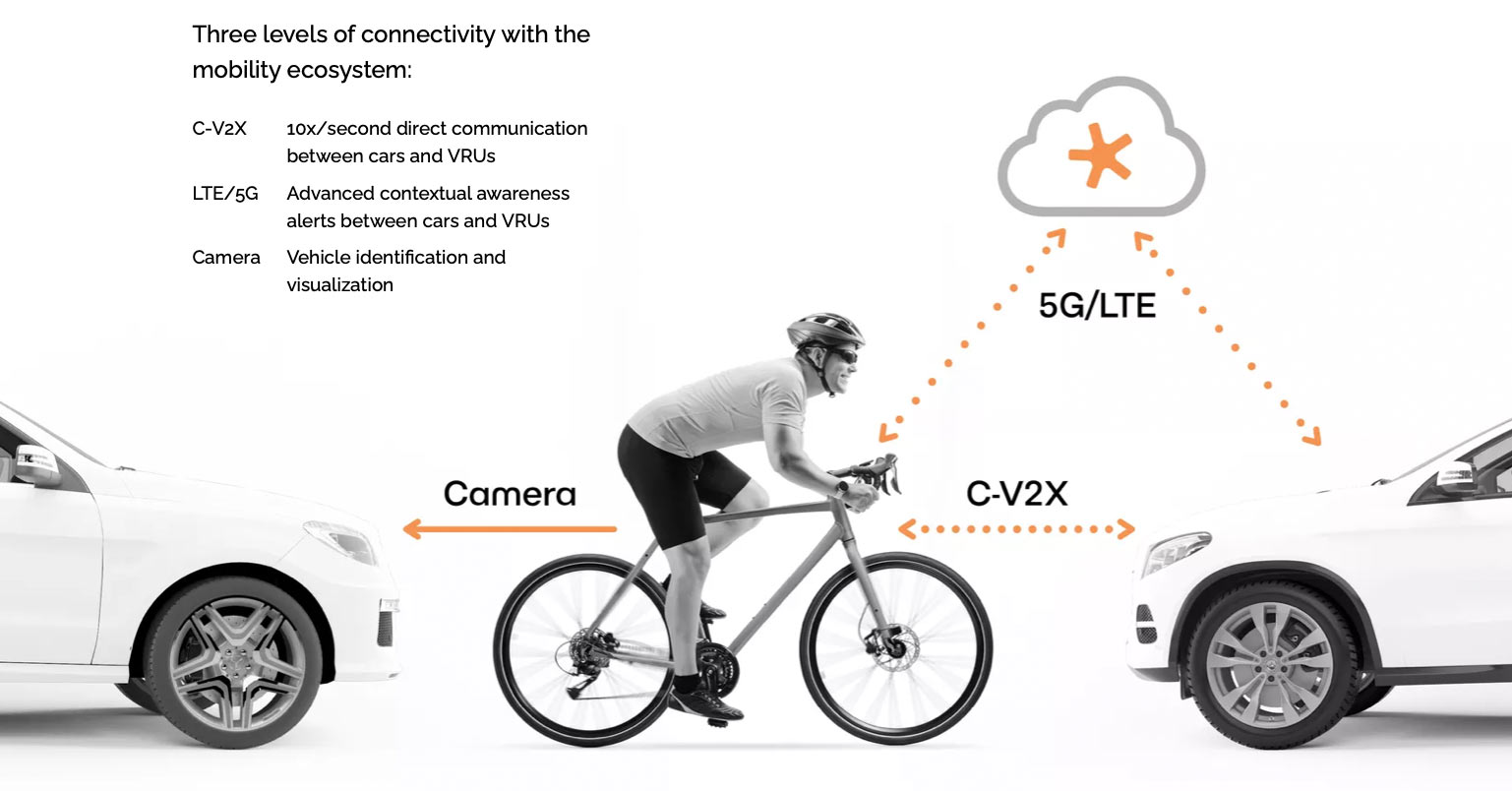 And that’s the goal, to integrate the electronics into both bikes and cars, letting riders use the cycling computer of their choice, and letting bike brands integrate the technology as a selling feature. But they’ll also offer standalone transmitters for anyone who wants to upgrade.

It can even be integrated with on-bike cameras. This would let it shift from showing a graphical alert of cars coming up behind you to actually showing you the car (and, likely, recording it) as it gets closer. 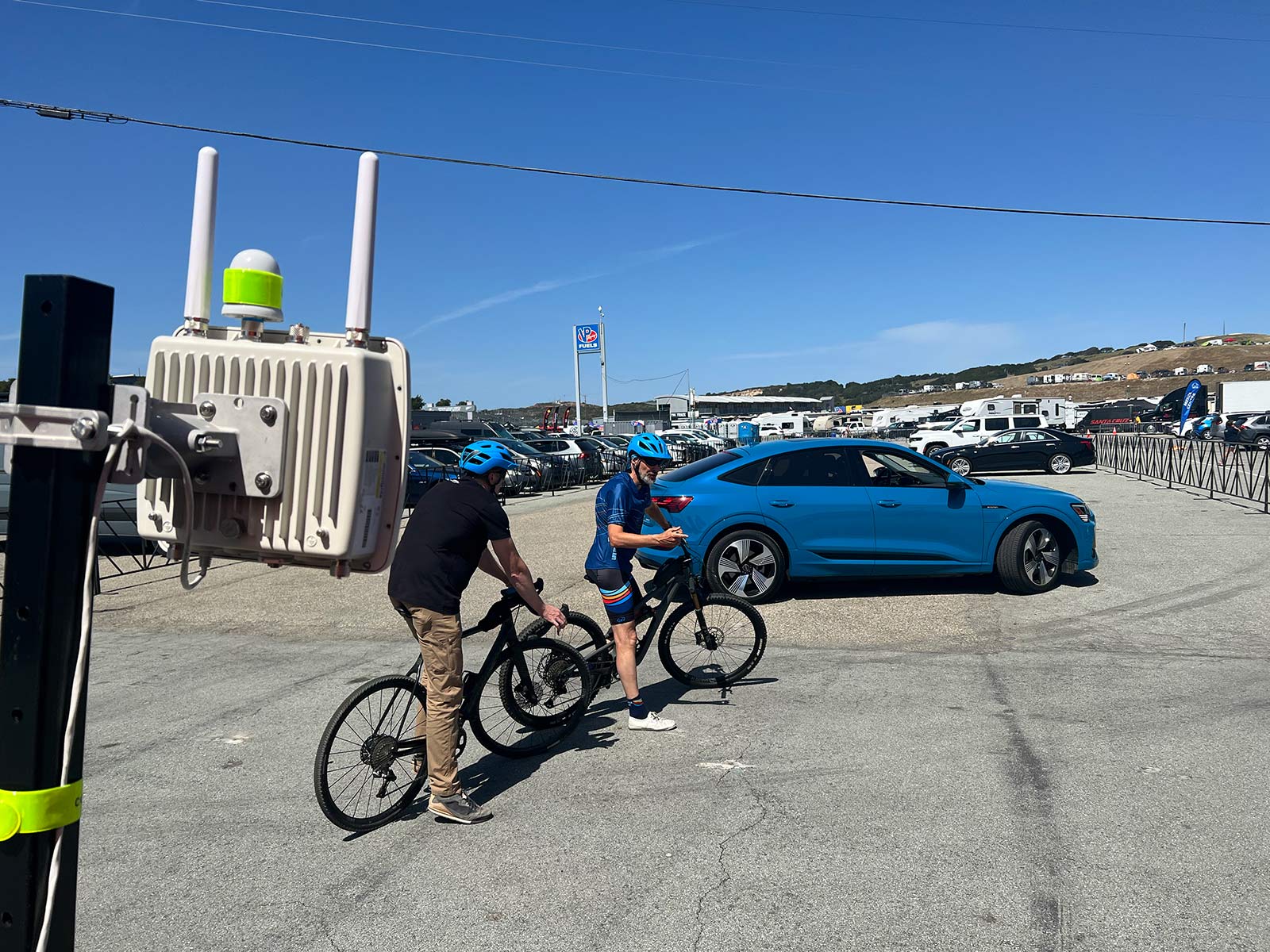 Vehicles, however, will need the tech to be installed, but Spoke is optimistic. Audi is already an official partner, and they say they have more brands coming online in both the automotive and cycling worlds, however they couldn’t share who.

What’s promising is that this technology is already widely used. That transmitter shown above is using the same band, allowing cities to track municipal services like snowplows, etc., and turn the traffic lights green as they approach.

By using these in conjunction with cars and bikes, cities can learn where traffic and different users are, then adapt their infrastructure planning accordingly. But, fortunately, C-V2X (Cellular-Vehicle to Everything) tech doesn’t rely on them, so this system will work for cars and bikes anywhere those vehicles have them installed.

It’s perhaps the most promising tech we’ve seen yet for alerting drivers to a cyclist’s presence, no matter where they’re approaching from. Yes, we’ll have to add it to our bikes, and vehicles will have to add it to their dash, but the passive nature of it means no one has to opt in once it’s installed…it just works.

Nope, we need to shut down this push for bike beacons immediately. The car-makers are pushing for it as their autonomous software is terrible at detecting bikes and pedestrians. It’s a slippery slope until you won’t be allowed on the road without some kind of beacon.
https://www.forbes.com/sites/carltonreid/2021/11/06/bidens-12-trillion-infrastructure-bill-hastens-beacon-wearing-for-bicyclists-and-pedestrians-to-enable-detection-by-connected-cars/

Right. We certainly don’t want to do anything that might help cyclists avoid getting hit. That probably makes sense to someone.

This is all very technologically exciting but I am designing a low tech alternative; drivers pay attention to driving and don’t text message or otherwise lose their focus on the road. It would cost nothing and utilize existing technology to make roads safer for all.

Exactly. Drivers need to be responsible for their vehicles. If this beacon technology gets adopted I can see a day when a cyclist is responsible for getting maimed or killed by a car because the battery on their beacon died.

That’s a great plan, but using other means to further help protect cyclists is also good. Waiting for drivers to pay attention is likely to result in disappointment. As is almost always the case, banking on a solution to a problem is myopic. Real problems require multi-faceted solutions, and the tech in this article could be one of several solutions that could help cyclists get home safely.

If you are going to rely on perfect drivers then you might as well get rid of seat belts and airbags too and all other safety systems built into vehicles like traction control, ABS, etc.

Yep you are right, big nope!
This makes me so sad. Please solve the real problem, Stop building car centric cities and learn to drive before you get your license.
This solution soooo laughable for someone living in the Netherlands, Germany, Denmark, Sweden, …
Check out the Youtube channel: Not just bikes https://www.youtube.com/c/NotJustBikes