Most modern suspension includes hydraulic damping, but we wanted to know more about how undamped suspension functions – to better understand its benefits & limitations. So with the input of some key engineers, we dive into undamped suspension – starting this week at the front of the bike, mostly focusing around Lauf’s carbon leaf spring forks.

How & why does undamped suspension work? The vast majority of suspension components in modern bicycles usually share one common component – a controllable suspension fluid to dampen vibration and impacts. Without any damping, a suspension input would bob uncontrollably up and down, indefinitely in an frictionless theoretical world. But adding a hydraulic damping circuit to a system that often includes air shock adjustability creates a lot of complexity. We’ve already discussed how this impacts the most common Internal Floating Piston design, how it regularly leads to cavitation and performance degradation, and how forks try to keep air & oil separate. But with suspension bleeding into other disciplines beyond traditional mountain biking -think gravel and alt-road – there have been several efforts to simplify suspension design. Especially in shorter travel applications and when weight savings is key, several suspension designs have omitted hydraulic damping altogether. So how do they work? We talked to the designers behind the Lauf Grit SL fork & True Grit gravel bike which we have just reviewed. Lauf’s Chief Designer Gudberg Björnsson & CEO/engineer Benedikt Skúlason remind us that in general undamped suspension actually doesn’t work well. “The key to understanding undamped bicycle suspension… is realizing that the suspension system is actually not undamped.” Lauf’s leaf spring forks do not have active damping. But as they put it, the rider and the tires provide damping, and in some types of terrain and riding “this inherent damping of a bike+cyclist is more than enough”. When you are talking about bikes that aren’t subjected to intense, repeated impacts, mechanical damping isn’t really necessary. Adding active damping might add more weight, complexity, and potentially be a waste of drivetrain energy or a limit to suspension responsiveness.

How does undamped suspension absorb shock & benefit the rider on…

Without active suspension input damping, more simple leaf springs like on the Lauf forks mostly aim to distribute peak impacts over a longer period of time. Whether it is a big drop or a speed bump, the undamped suspension sucks up the input force and transmits that same total force to the rider at a lesser intensity for a longer duration.

“For instance, if you hit an obstacle at low speed… you would have a sharp load spike if you’d run a rigid setup, however with a Grit fork that load spike is spread over a longer time interval. The impact energy goes into the bike+cyclist, but the rider will have way more time to deal with the impact.” A big benefit there is that a sharp impact that might otherwise knock you off balance, can be managed without a loss of control or momentum. At higher speeds and with smaller repetitive impacts the undamped suspension can often perform even more efficiently, to effectively remove those smaller peak impacts entirely. “When riding faster over smaller obstacles [the rider] will have cleared the obstacle before the suspension rebounds under you.” Essentially what happens is that the more massive rider+bike combo remains in a constant position while the wheel under you is free to move up and down. A rigid fork would bounce up and down and transmit every impact to the rider, but something like a leaf spring Lauf fork can better keep the wheel in contact with the ground for grip/control.

Speaking also with Benedikt, they say this is where their undamped suspension “really shines”. Because of their carbon leaf spring design vs. a telescoping slider with seals, their forks “have no friction, so they act faster than any other fork we know of, and the energy that goes into the system during the hit is not lost via damping. On a damped fork you would end up closer to the ground after the hit, since the fork would not rebound fully as the damping would steal some of the energy that went into it.”

OK, so does undamped suspension only work for short travel?

With regards to forks (but applicable to other items like cockpit components or frames too) lengthening travel also brings with it decreasing spring rate – no one wants a DH bike with suspension as stiff as an XC bike, even if it has 200mm of travel.

Lauf says that increasing undamped travel & lowering the spring rate for larger hits, “eventually the inherent damping of the system (mostly the rider) is not sufficient”. Too much energy gets stored from the big impact, then released back for the rider to handle. It just becomes an intense “pogo-stick”. The other issue is that with longer travel & a softer spring rate, you begin to overlap rebound with pedaling frequency. That then leads to “bouncing around on your bike, which some might think of as good fun, but probably not what we would describe as a good suspension system.” For those two reasons undamped suspension will never veer too far from shorter travel road, gravel, cross, and cross-country type applications.

So, why chose undamped over actively damped, in the first place? Our first thought was just that an undamped system tends to be lighter. And lighter is always better, right weight weenies? But it is always more simple, so an undamped solution is going to require less mechanical maintenance and likely should be more robust – less working on your bike and more ride time.

But in the case of Lauf’s leaf spring design, the undamped fast rebound actually seems to also deliver quicker suspension response to rapidly recurring small impacts. And they say it “reduces the loss of energy associated with these [fast, smaller] hits and with pedal bob on a damped platform.” So, no more choosing if you want a fork open to absorb the occasional impact and continuous buzz, or locked out to minimize loss due to bob. In theory an undamped fork is a happy medium in between for shorter travel applications like rough road, gravel or less-aggressive cross-country racing. That also seems to be the idea behind Trek’s flexing steerer tube front IsoSpeed system & Specialized’s telescoping steerer tube Future Shock, both providing undamped suspension at the front end above, rather than below the frame’s headtube.

How do you set up or tune undamped suspension for rider size/weight? Just like you would adjust a coil shock for different rider weights or riding style, undamped forks (or other suspension) can have its spring rate adjusted too.

Lauf says that in their short travel application it is much less important than we would think. They say that the ability to minutely adjust your desired “tire pressure plays a larger role than on longer travel systems”, essentially letting riders fine tune the first suppleness of the complete bike suspension feel and letting the undamped fork suspension then back that up. While at first glance that seems like a shady explanation to me personally, spending time riding their newest gravel fork (and its accompanying frame), especially with large volume gravel tires, does seem to back up the importance of tire pressure tuning in over suspension feel.

Benedikt also explains that in their experience, lighter riders generally prefer a relatively stiffer, “prioritizing efficient sprinting characteristics” while heavier rider prefer more active suspension movement. Looking at the actual numbers, he also says that the standard range of riders “are far more similar to one another than we might think.”

“You might look at a 60kg (132lbs) guy and see him as a featherweight climber and a 90kg (198lbs) guy as a heavier rider (amongst fit riders). However, if we’d assume that a certain suspension system was designed to be optimal for a 75kg rider, then note that the 60/90kg riders are only 20% lighter/heavier than 75kg. If we assume the lighter riders to want a slightly firmer feel and the heavier riders to want a softer feel, where does that lead us? I can confirm that the testing we’ve done with spring rates at Lauf have consistently returned surprisingly (at first) unanimous results. This is not to say that an NFL player and a ballerina would opt for the same, but a vast majority of cyclists actually do.”

What about using undamped suspension beyond fork design?

Obviously Lauf sees the rationale for undamped suspension in short-travel forks. The same concept can be applied to a wide range of additional components. Frames are the next most logical place that we would think, and we’ll look at an undamped frame design in a future Suspension Tech article. Again, it seems for the most part travel-limited for the same reasons here – prioritizing comfort & control over eating up big impacts. But still there, it is important to think about what type of impacts you are trying to absorb. Lauf recently introduced their own frame, and chose not to include a suspension component for their targeted gravel race segment. They did however finish out our ‘undamped’ discussion with a tease to “stay tuned for future Lauf products…” Beyond frames & forks, next are probably handlebars, stems, seatposts, and even grips that get undamped suspension. How each one works depends a lot on how much travel or flex it builds in, and how that movement impacts the overall feel or handling of the complete bike. We’ve seen products covering each of those components, and might look deeper into their suspension characteristics in the future as well. 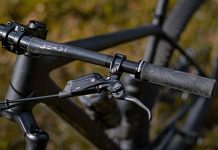 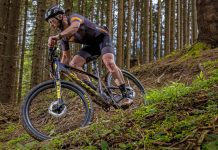 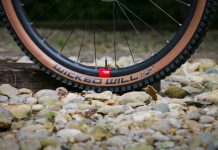 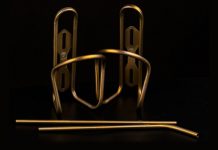