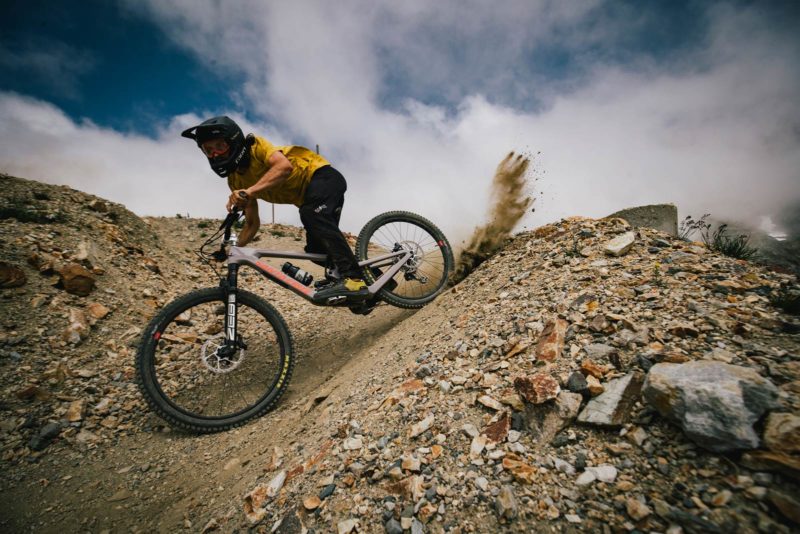 The Santa Cruz Nomad has entered its 6th generation, following in the wake of the Bronson by abandoning the complete 27.5″ wheelset in favor of a mullet configuration. With the larger front wheel comes a host updates to the geometry and kinematic, including longer proportional length stays, a slacker head angle and, to satisfy the pack-haters out there, a Glovebox stowing a Tool Wallet and Tube Purse. Here’s an overview of the 2023 Santa Cruz Nomad. 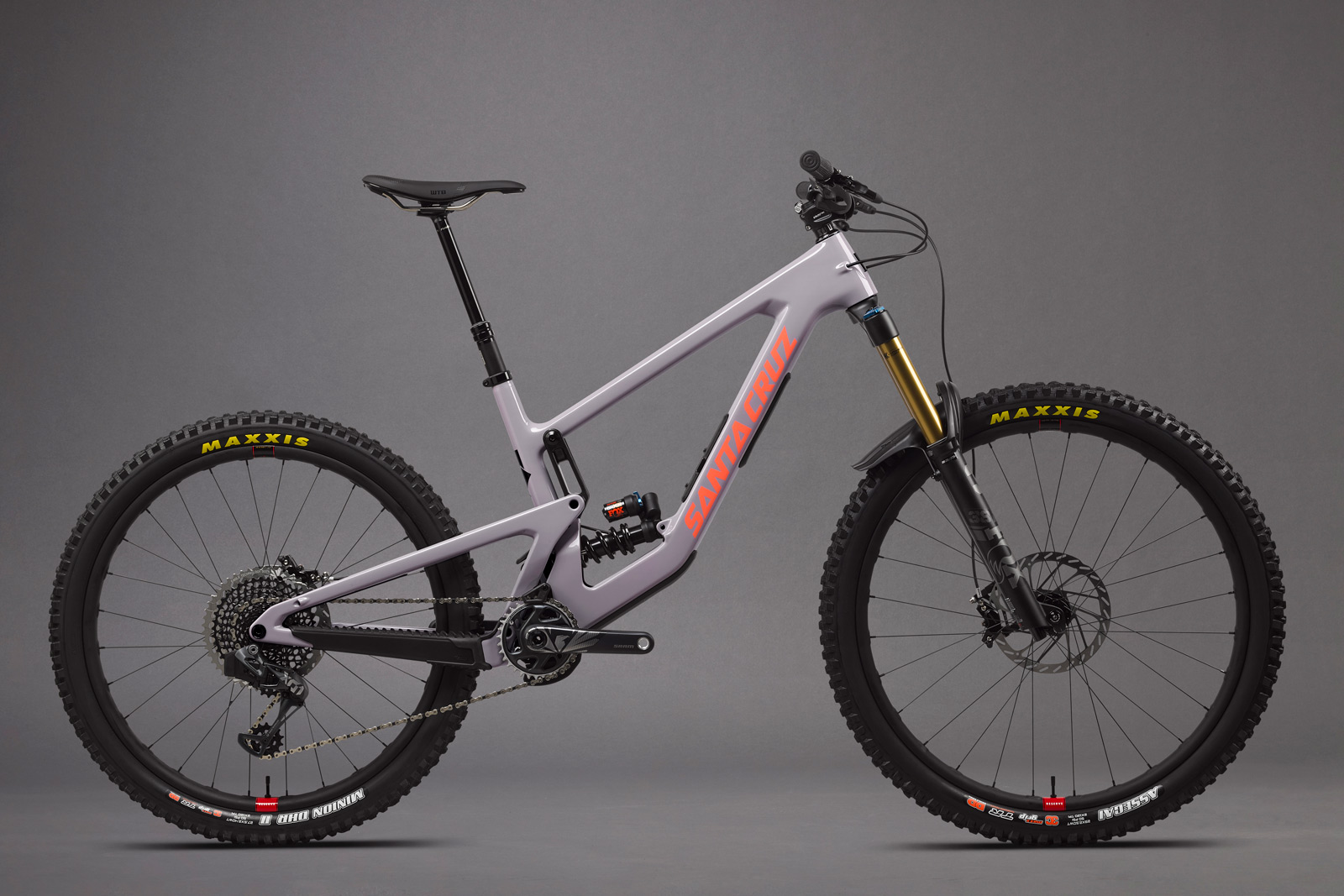 Though its wheel sizing may have changed, its intention hasn’t; the 2023 Santa Cruz Nomad is still their “Send it anywhere” model. Marketing phrases aside, let’s compare and contrast the old and new. 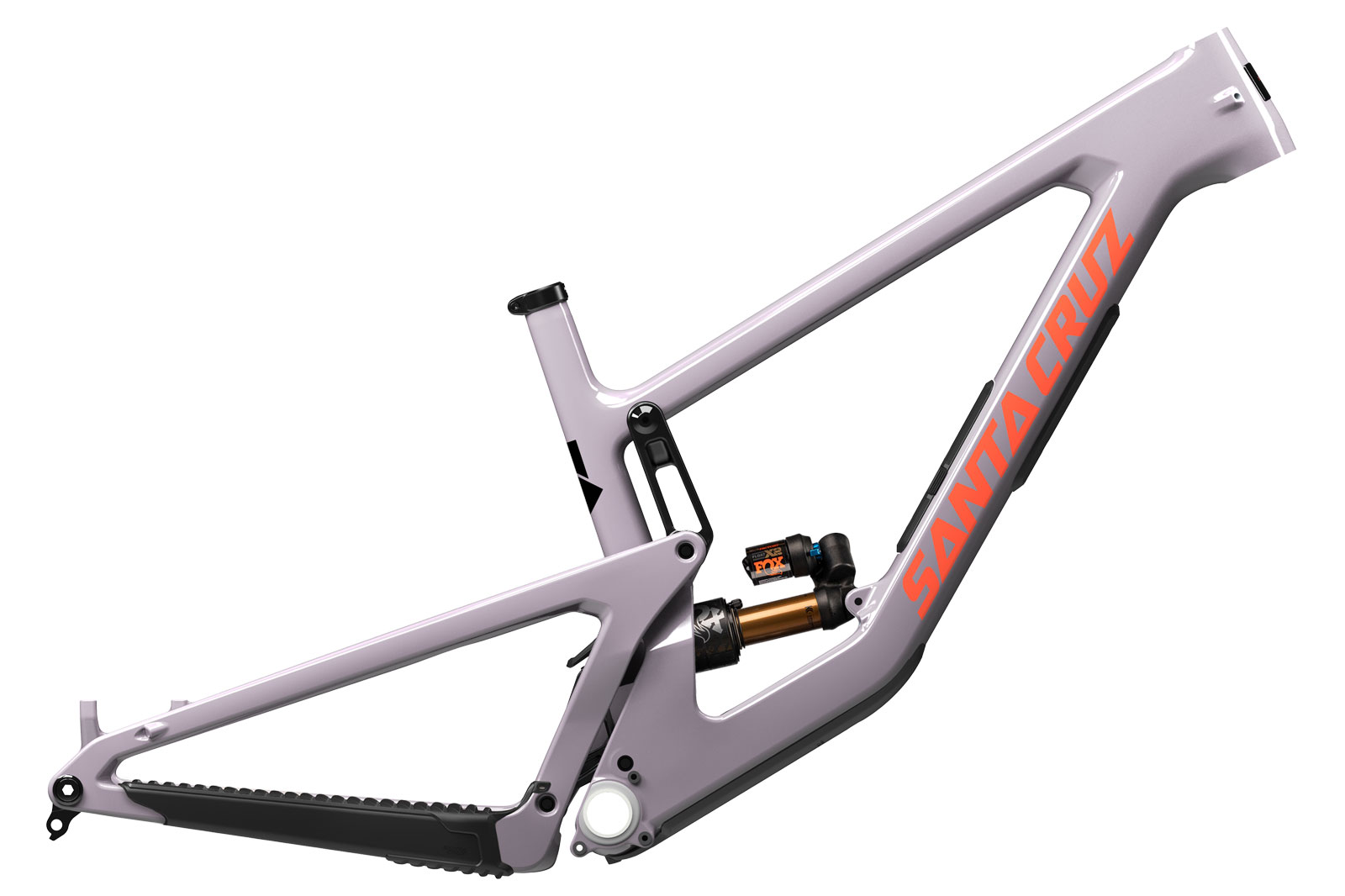 Only the lighter CC frame is available as a frameset, retailing at $4,249 USD 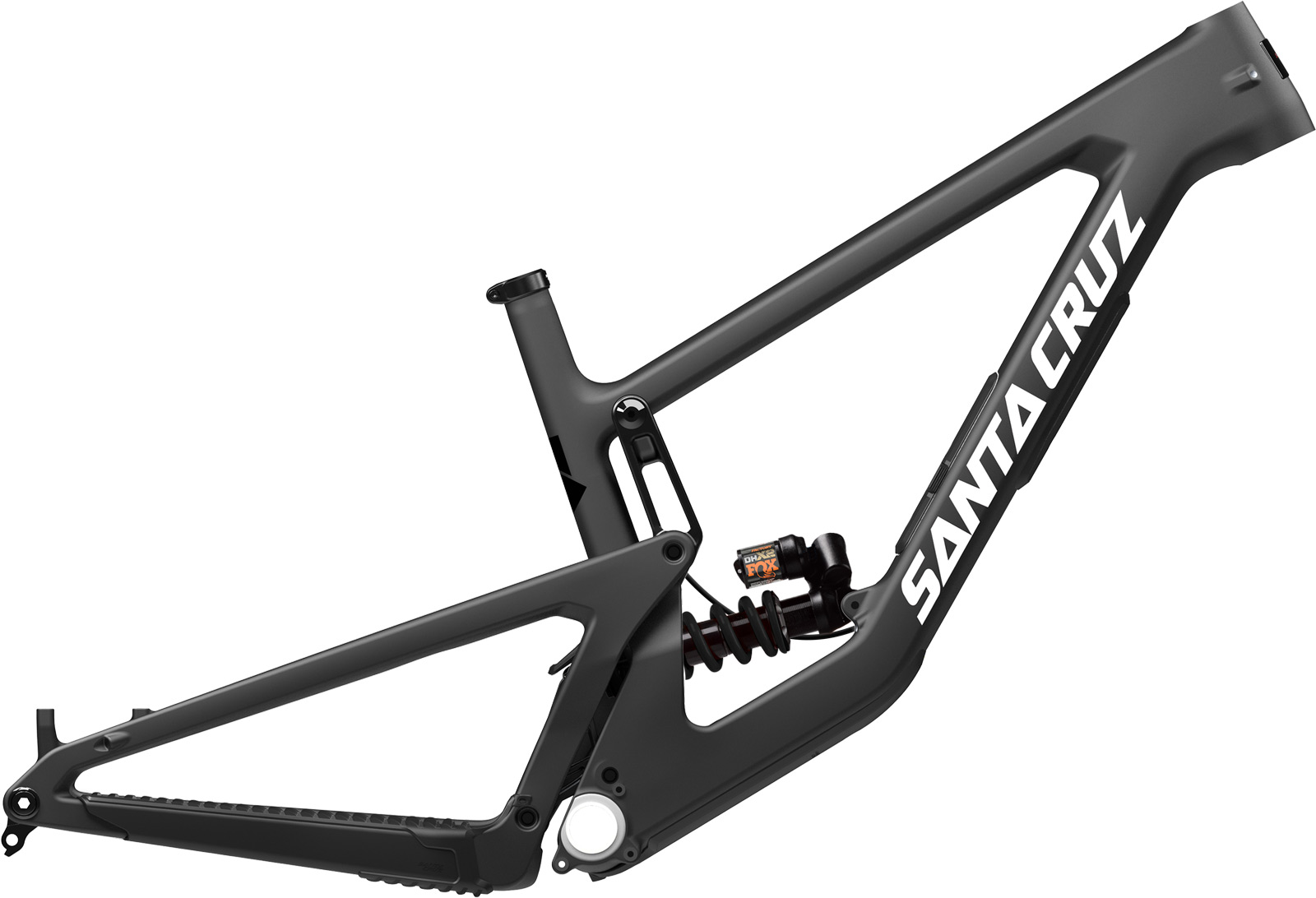 For 2023, travel remains at 170mm front and rear. It still runs the VPP-linkage seen across the Santa Cruz range, and changes to the suspension characteristic aren’t visible to the naked eye; minor tweaks to pivot locations has resulted in a small changes to the kinematic that should, nevertheless, be meaningful.

Santa Cruz tells us that, by reducing the starting leverage, they were able to improve body-weight influenced geometry stability. The resulting reduction in progression is said to allow the suspension to have consistently better tracking qualities throughout the stroke. To me, that indicates more scope for tuning the rear suspension to suit a given rider’s needs. 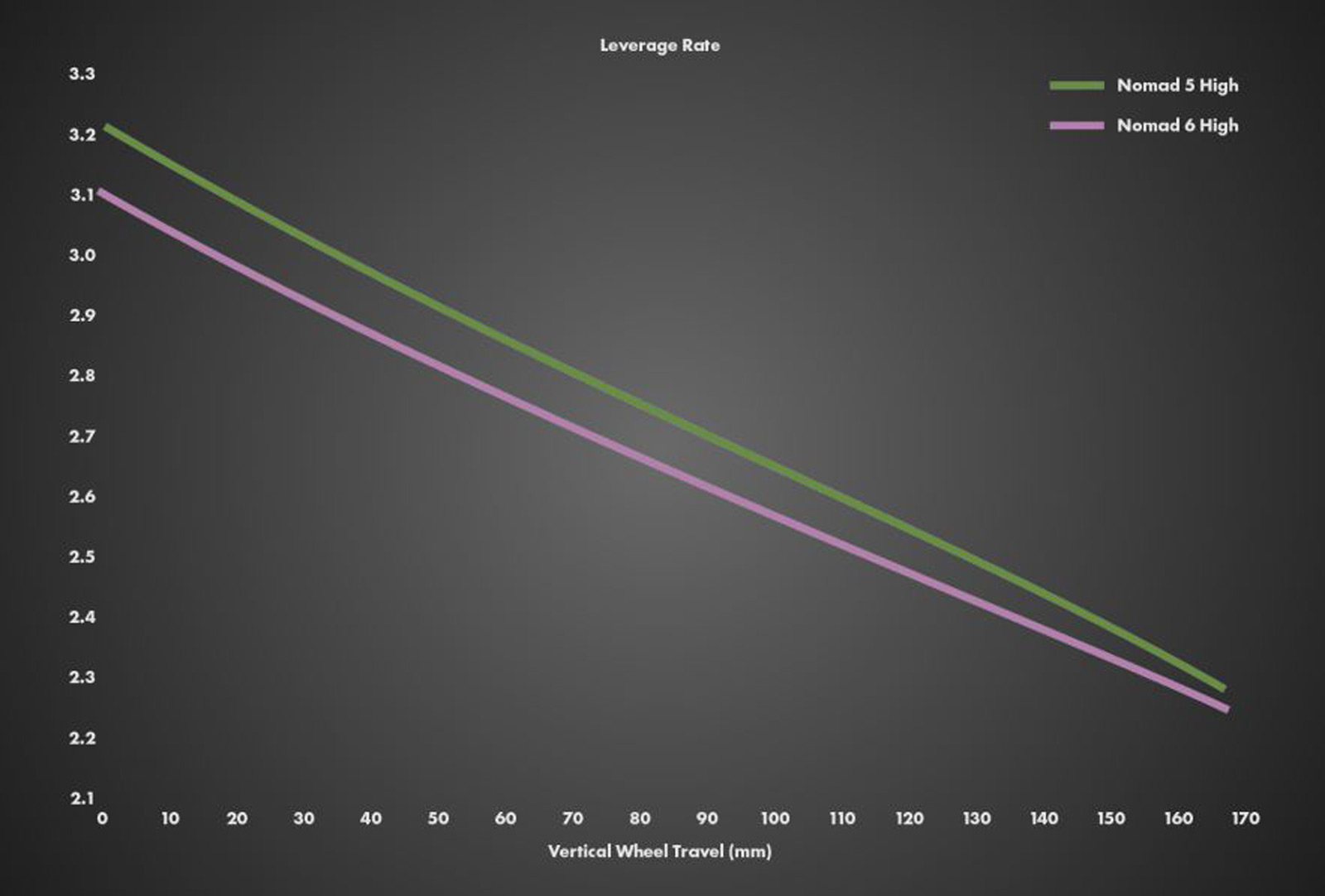 In a bid to reduce harshness experienced when the rear wheel takes big square-edged hits, the Nomad’s anti-squat values are slightly lower than previously. The specific aim was to reduce pedal kickback – the jolting sensation that can be felt at the pedals when compression-induced chain growth forces a rearward rotation of the cranks. The compromise here is that reduced anti-squat (the suspension’s capacity to resist acceleration-induced compression), though the change is subtle; anti-squat values still remain north of 100% until 100mm into the 170mm travel.

These changes contrast against those we saw implemented on the latest iteration of the Hightower, their 140mm travel trail bike, a bike where pedaling efficiency sits higher up the list of priorities. 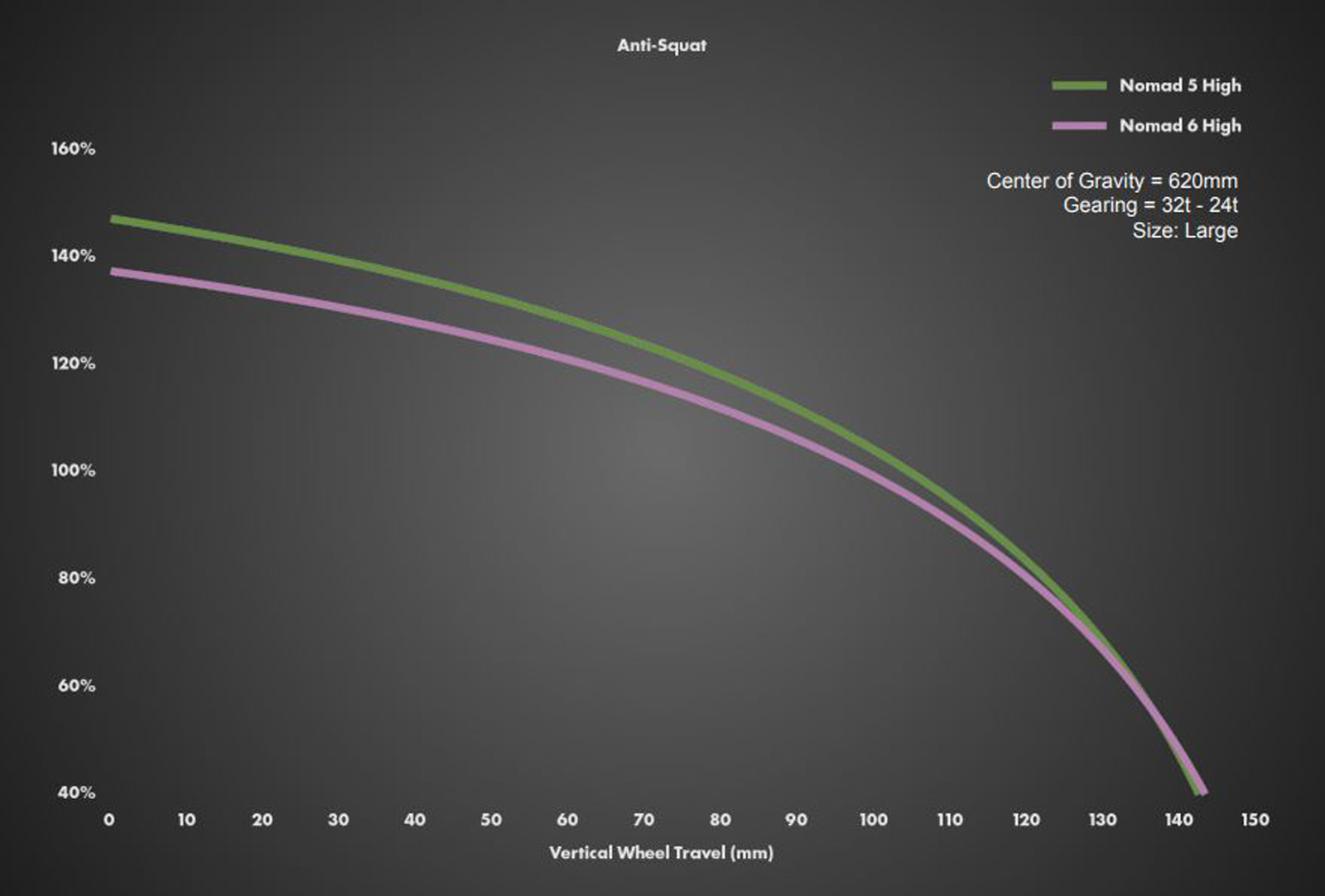 To help readers interpret this graph, Santa Cruz have indicated the conditions that produced it: an assumed CoG height of 620mm for a rider on a Large frame, pedaling in the 24t cog of the cassette with a 32t chain ring, Find out why all of those factors affect anti-squat here.

As an aside, for anyone quite sensitive to the downsides of pedal kickback, (flat pedal riders, for example) I can almost unreservedly recommend the OChain Active Spider. 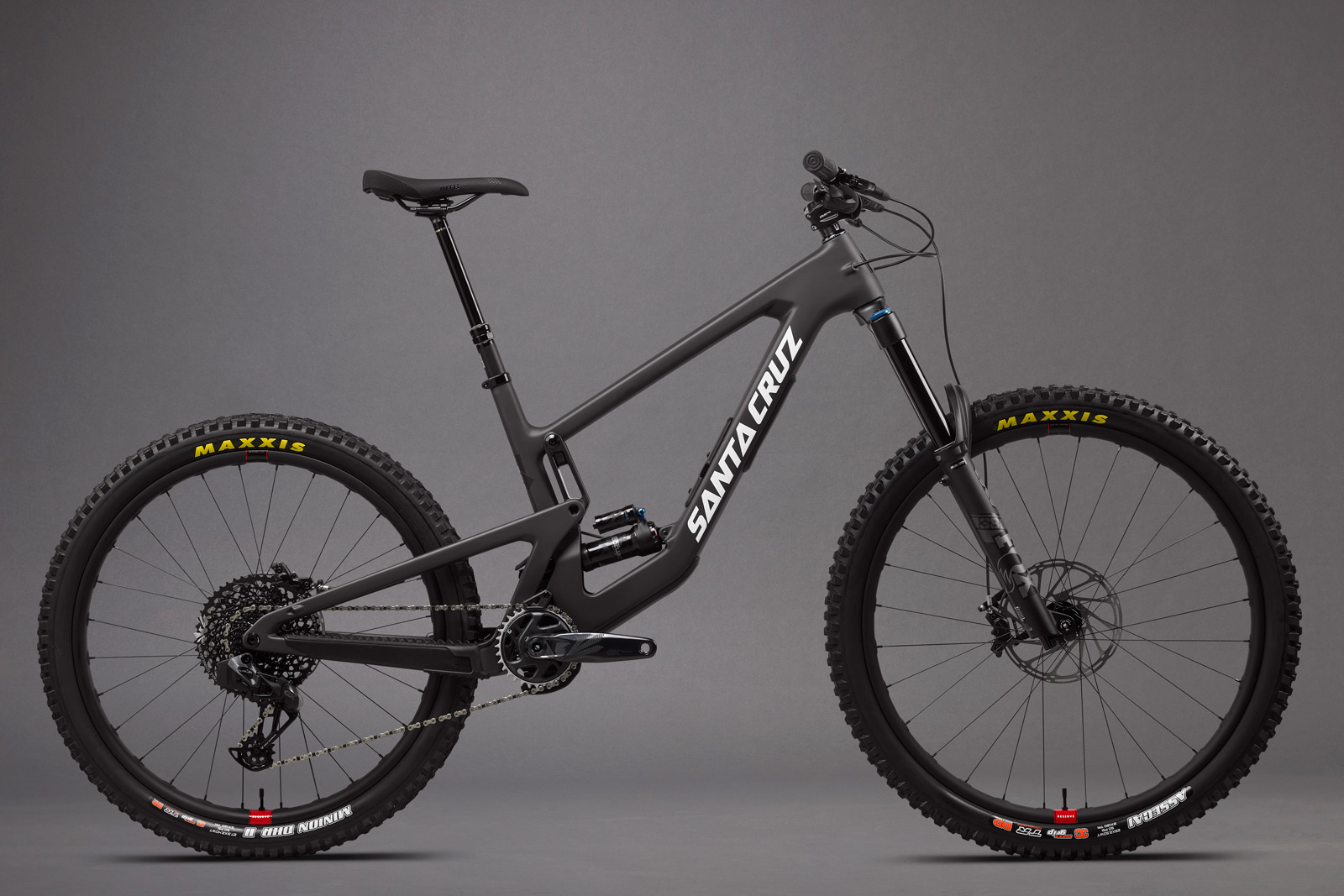 The Nomad holds onto its flip-chip, so there are two geometry charts to pore over. Just as we see across the Santa Cruz and Juliana line up, it is located at the lower shock mount; flipping its orientation raises or lowers the bottom bracket by 3mm, concomitantly steepening or slackening both the head and seat tube angles. 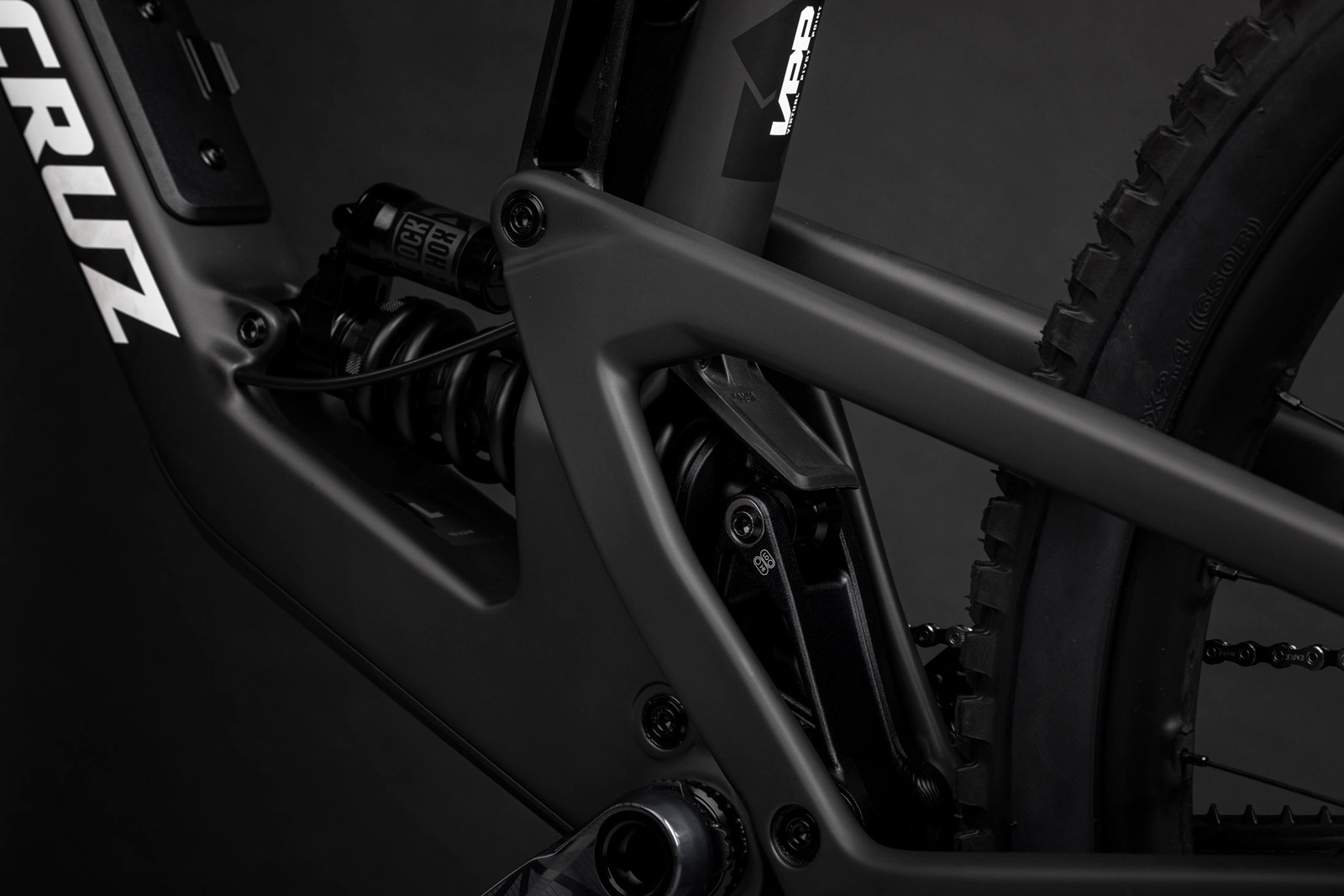 The geometry adjustment is very subtle, a lot more subtle than those brought about by flip-chips implemented by other brands. We’ll focus on the Lo position here as it produces the lowest, slackest configuration of a bike that is clearly focused (but not dedicated) to going down hill. 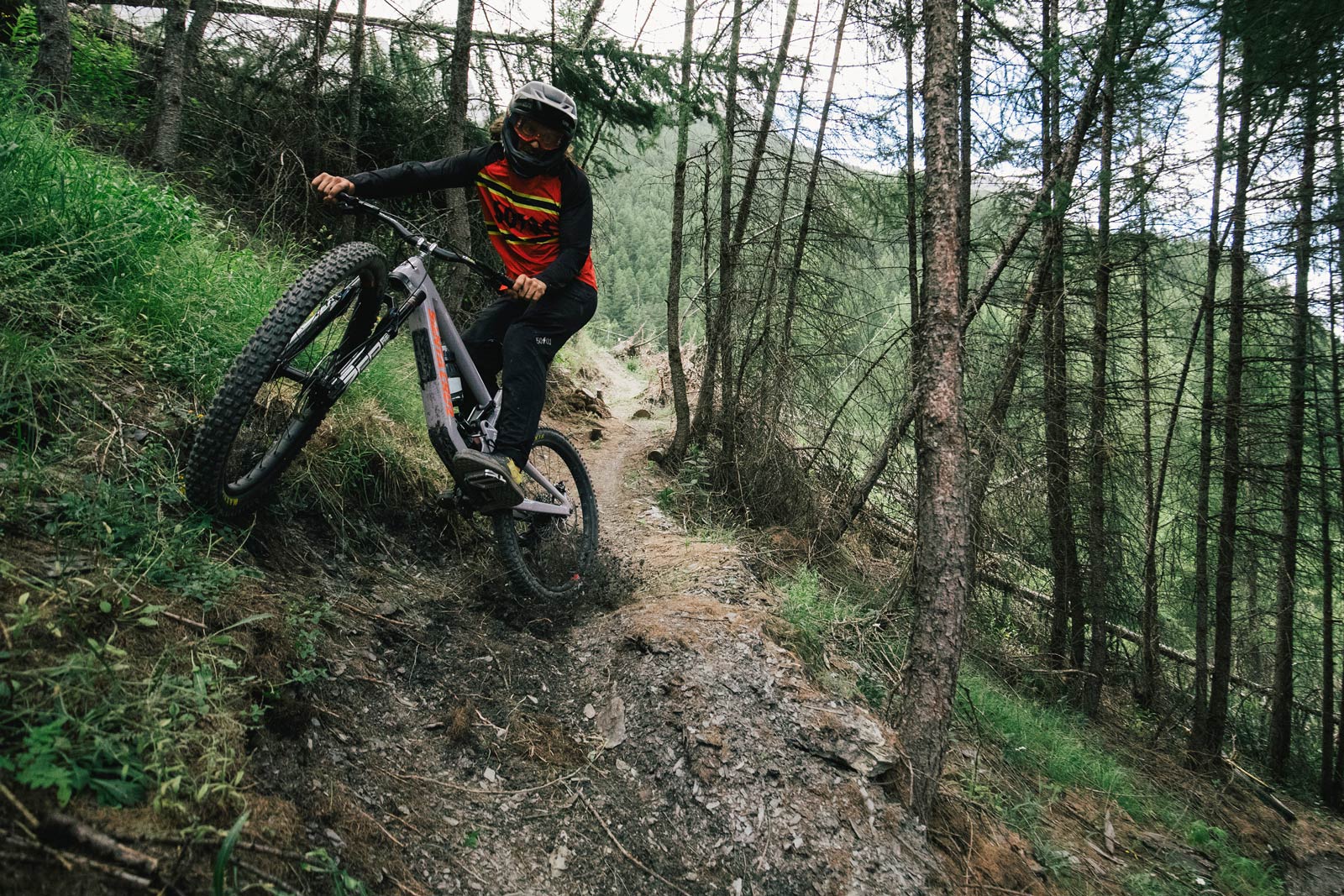 As well as altering rear-center length for each frame size, Santa Cruz also tune the carbon lay up to fine tune stiffness properties for each frame

To no one’s surprise whatsoever, the 2023 Nomad is the slackest version of itself yet, with a head angle of 63.5° in Lo. Santa Cruz are continuing a growing trend of proportional length stays, growing the rear-center length in line with the increasing reach as you look up through the frame sizes. Stays are 440mm on the small, topping out at 451mm on the XXL. Seat tubes get steeper through the frame sizes too, quoted as 77.5° on the XXL.

With the addition of an XXL frame at the top end boasting a reach of 517.4mm, the Nomad should now fit a wider range of rider heights. Reach on the Large is effectively unchanged at 472.4mm, but the jumps either side of it are now smaller; the medium comes in at 452.3mm and the XL is 492.4mm. 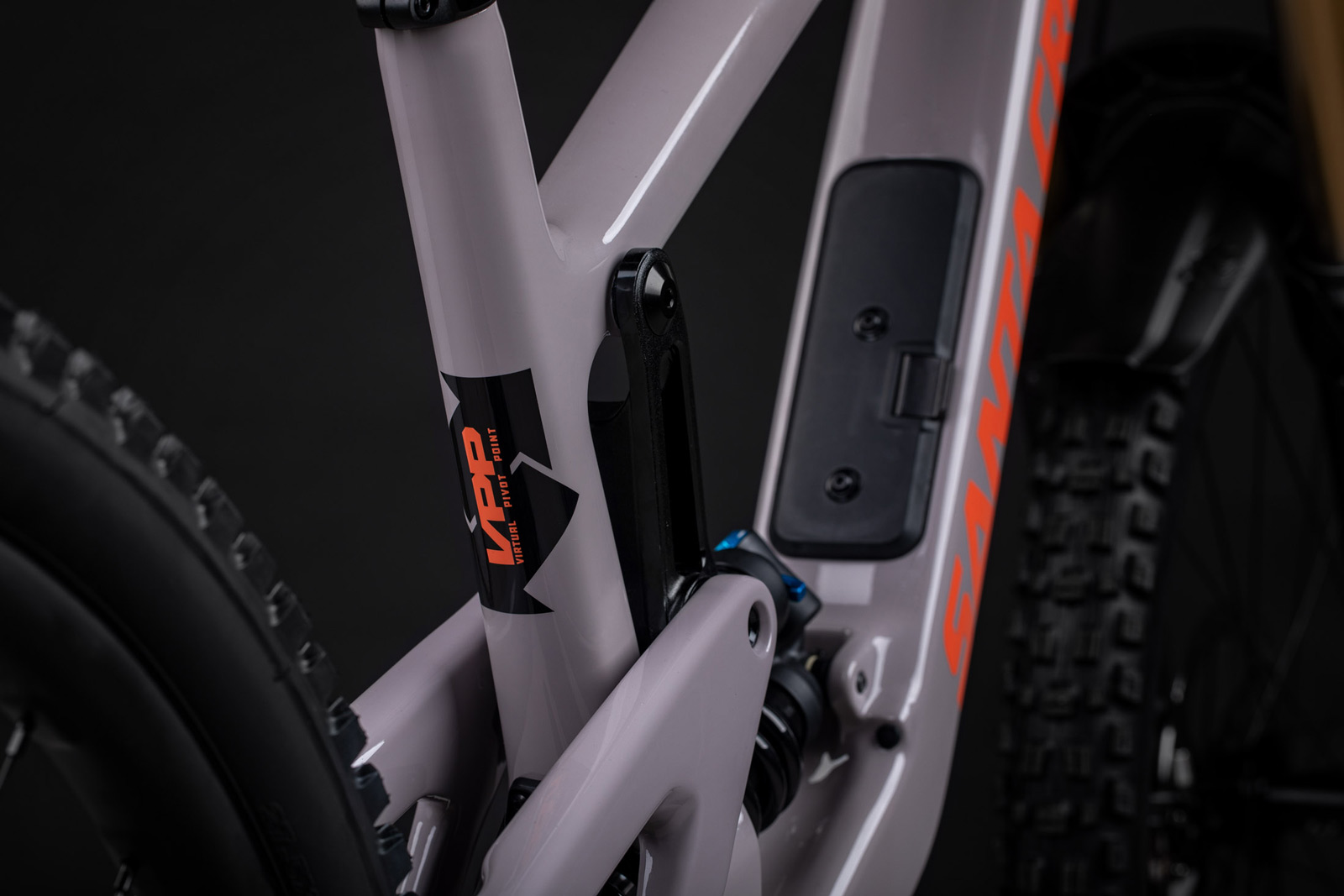 Just as we saw for the latest Megatower and Hightower frames, the 2023 Nomad is the latest Santa Cruz frame to benefit from a Glovebox, home to a Tool Wallet and Tube Purse – the idea being to get tools and spares off your back and onto the frame where you literally cannot forget them. This one doesn’t get the Sag Window we saw for the Hightower, however.

The Nomad has 148mm x 12mm spacing in the rear end, and all frame sizes have clearance for 27.5″ x 2.6″ tires. It also gets all the usual friendly frame features, including a SRAM UDH, a threaded bottom bracket, tube-in-tube internal cable routing and an ISCG05 tab for mounting a chain guide and bash guard. 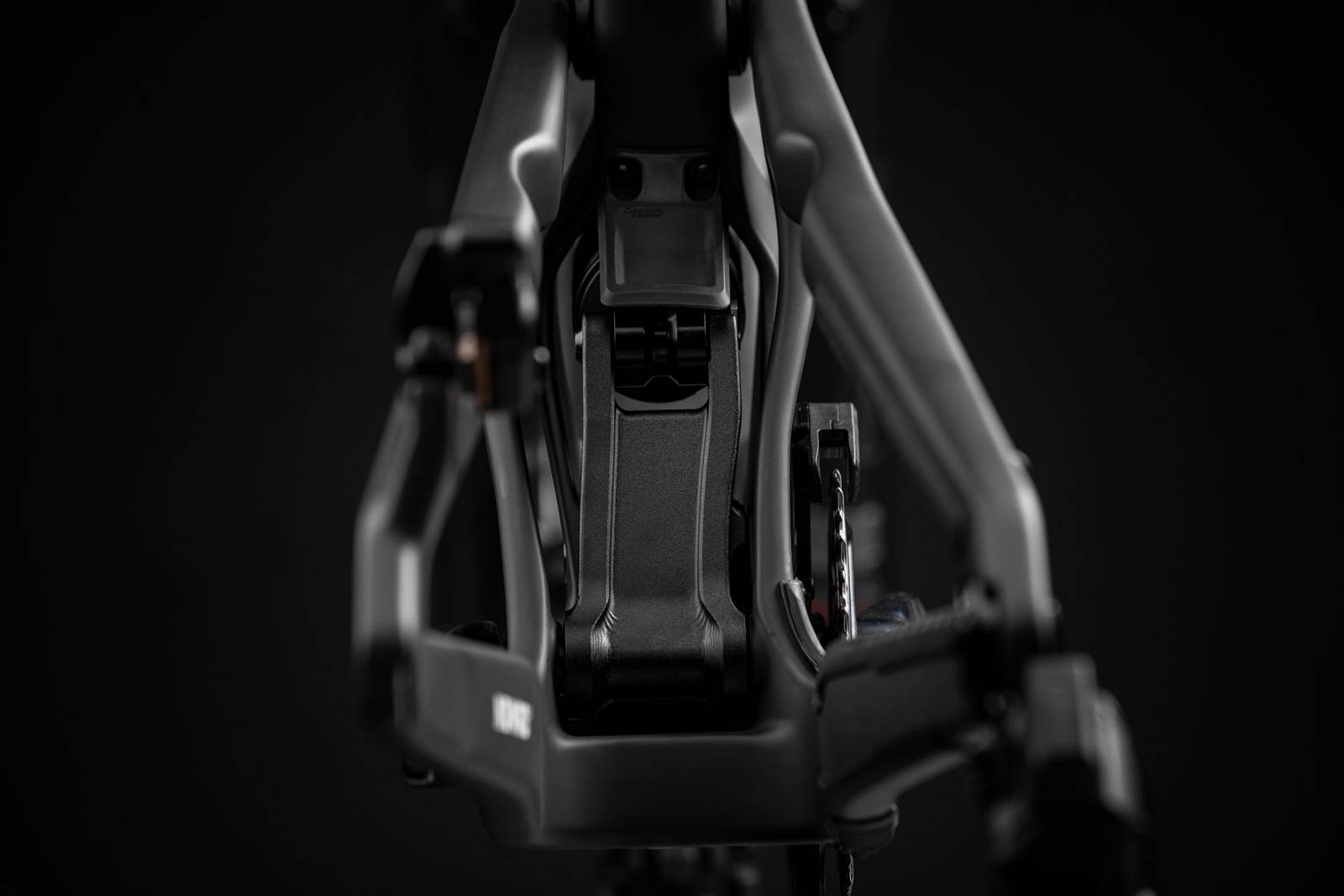 Pricing for the 2023 Santa Cruz Nomad starts at $5,649 USD for the Nomad C R, and tops out at $11,199 USD for the all-singing all-dancing Nomad CC X01 AXS RSC (Air or Coil).An overview of build specs can be found below. For more information on pricing and availability, head over to the Santa Cruz Bicycles website.