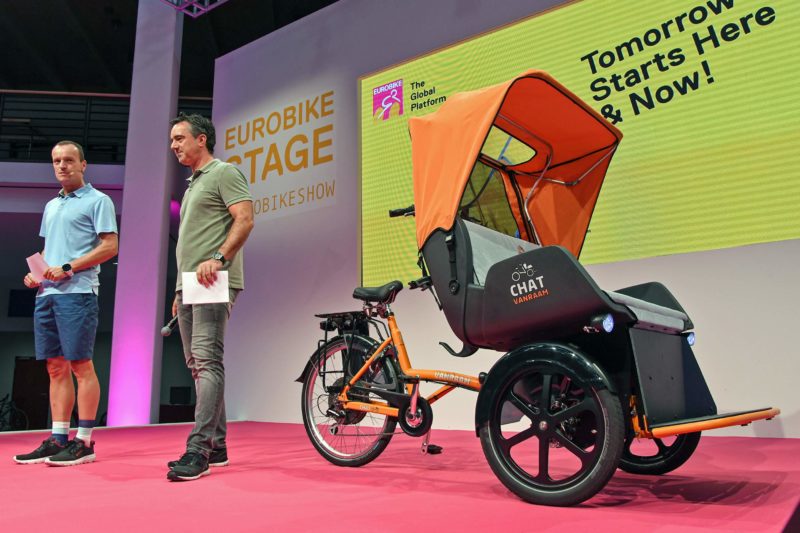 With the world’s largest cycling tradeshow set to pop off next week, Eurobike organizers teased us today of what’s to come. With a number of new bikes, e-bikes, clothing & accessories being previewed, we spotted a few interesting bits, plus a few trends we’ll look into deeper in the coming weeks. 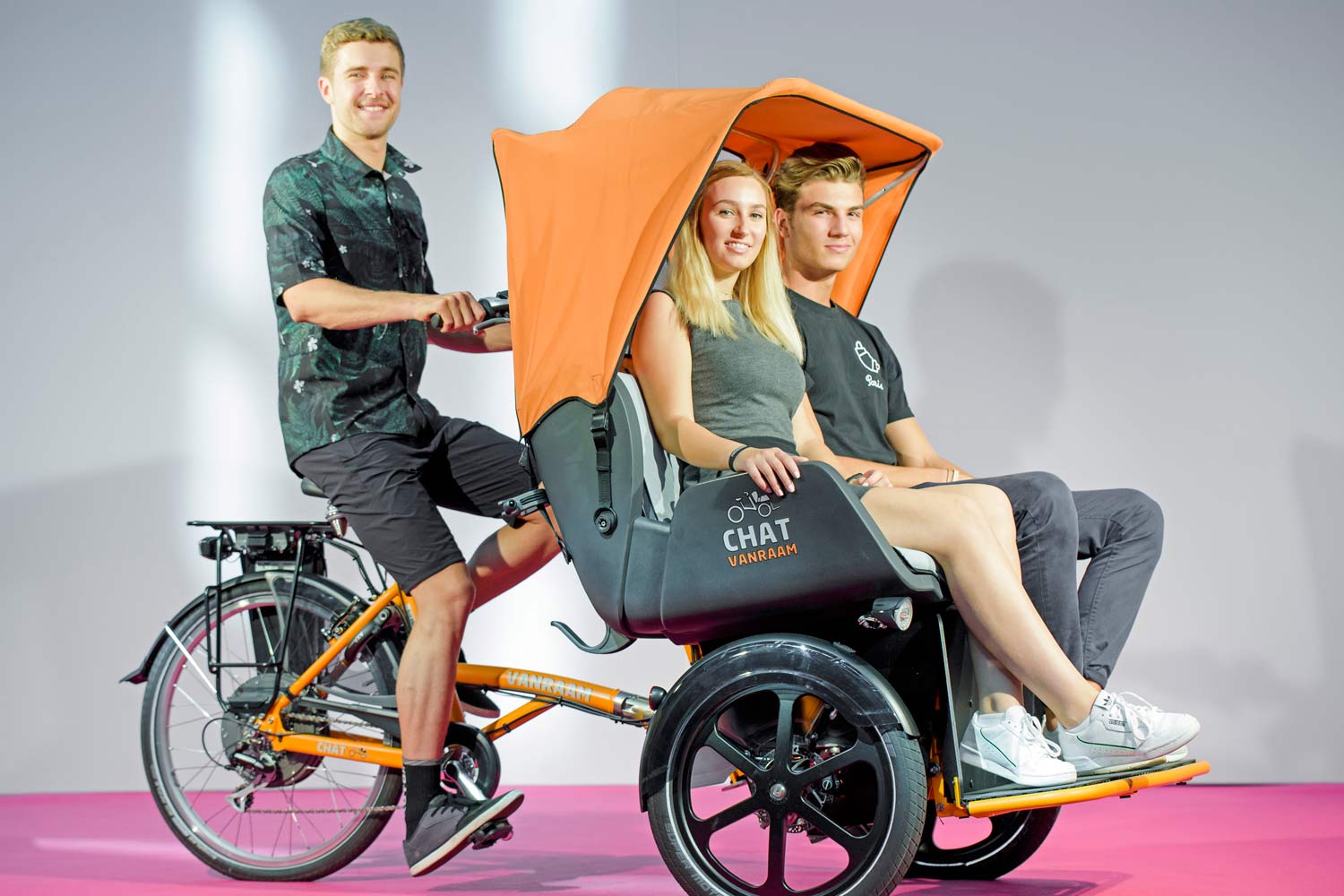 Eurobike‘s 2019 teaser press conference kicked off with an eye-catching rickshaw e-bike called the Chat from bike maker Van Raam, probably the most interesting of the new bikes that I hadn’t already seen. It’s a totally niche take on an e-cargo bike, but might be an appropriate solution in some cities. 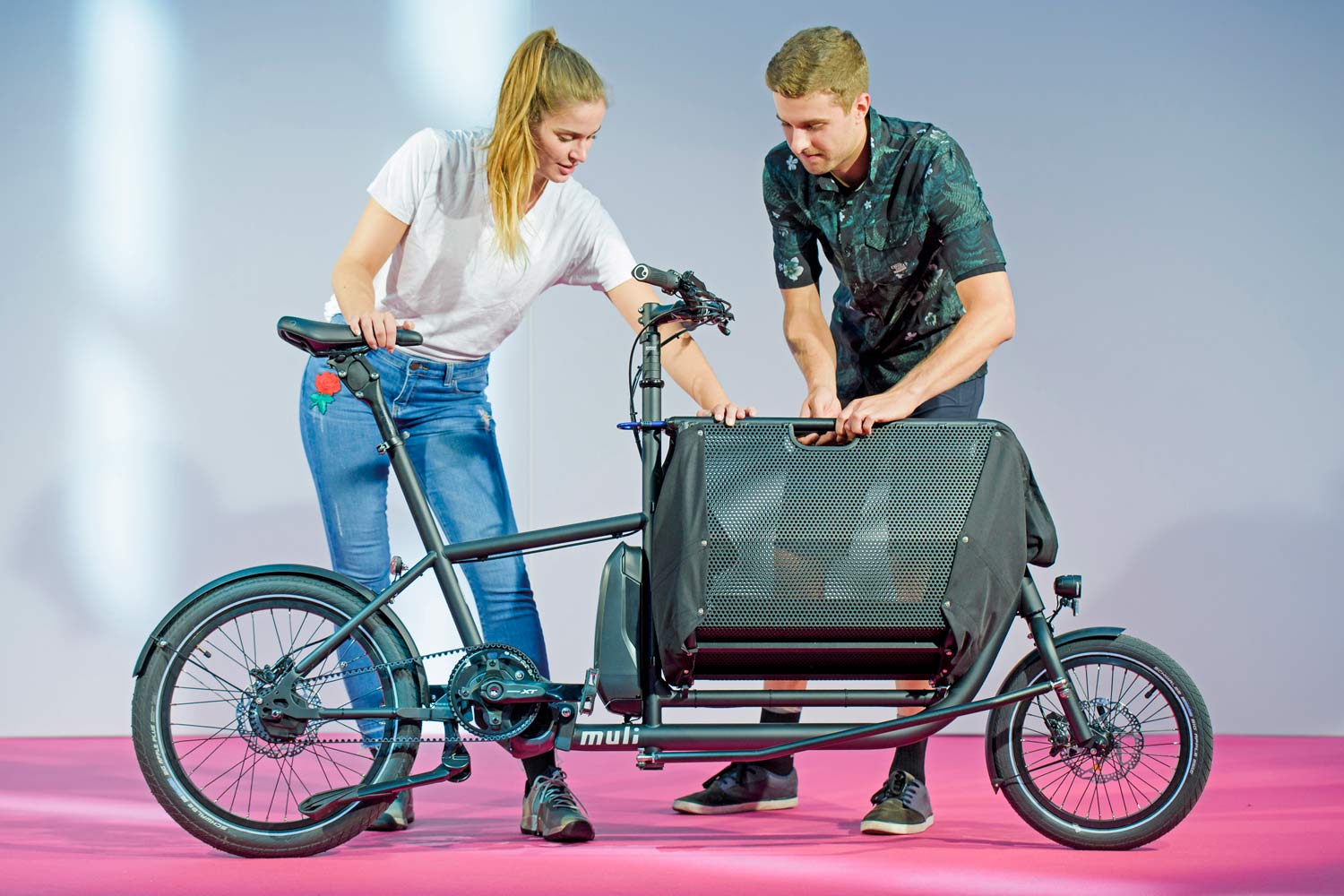 On the same interesting e-cargo bike front is the latest e-muli STePS from Muli Cycles. I’ve seen their folding basket concept before, but this latest e-bike version seems like the kind of small-scale cargo bikes that real cyclist can get behind, with the folding basket making it take up much less space when you aren’t hauling the kitchen sink. 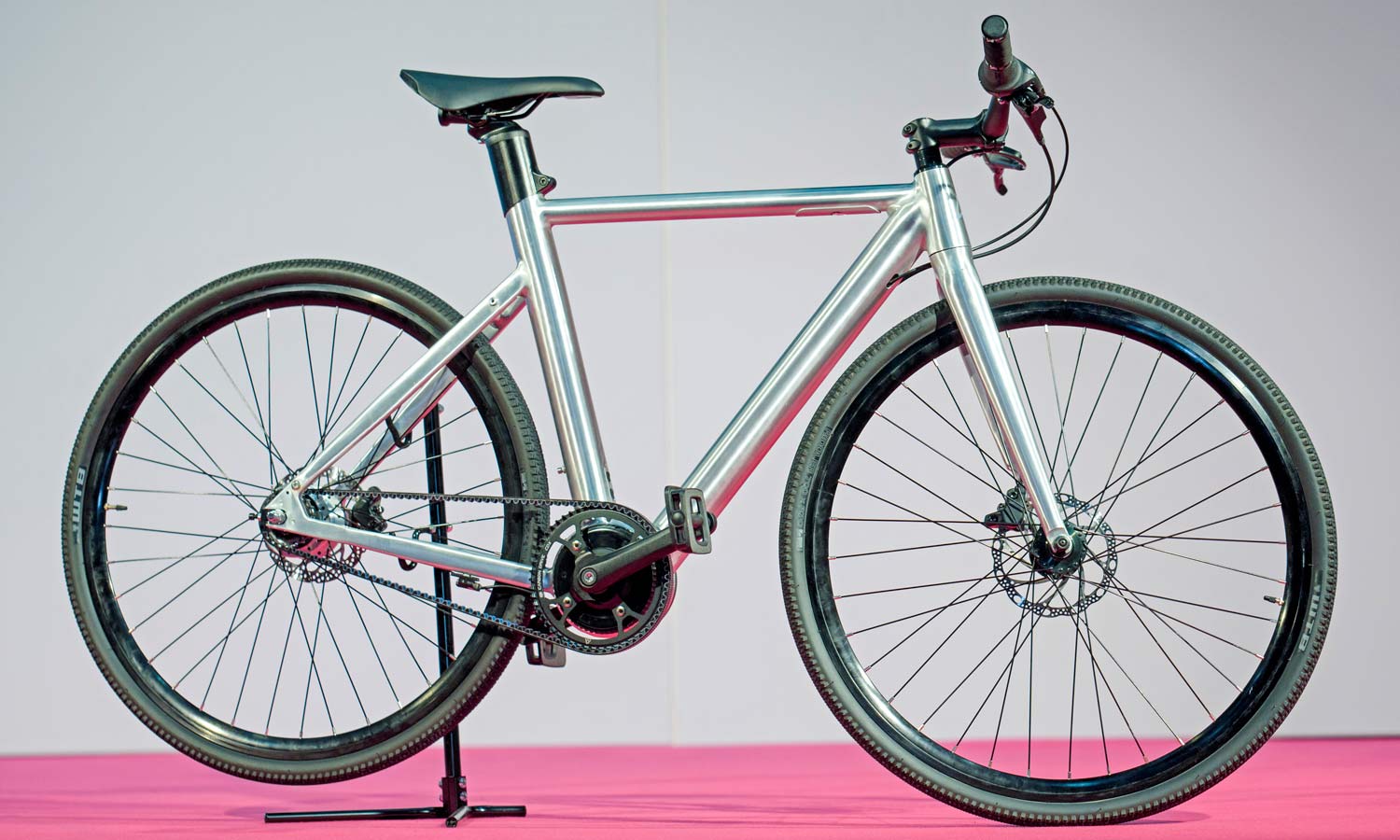 Another new to me e-bike, the Asfalt LR, a long range city commuter/e-gravel bike with two internal batteries, a central drive motor & a belt drive. With two batteries you get up to 130km range, or quickly pop the one out of the seattube for lighter everyday use. 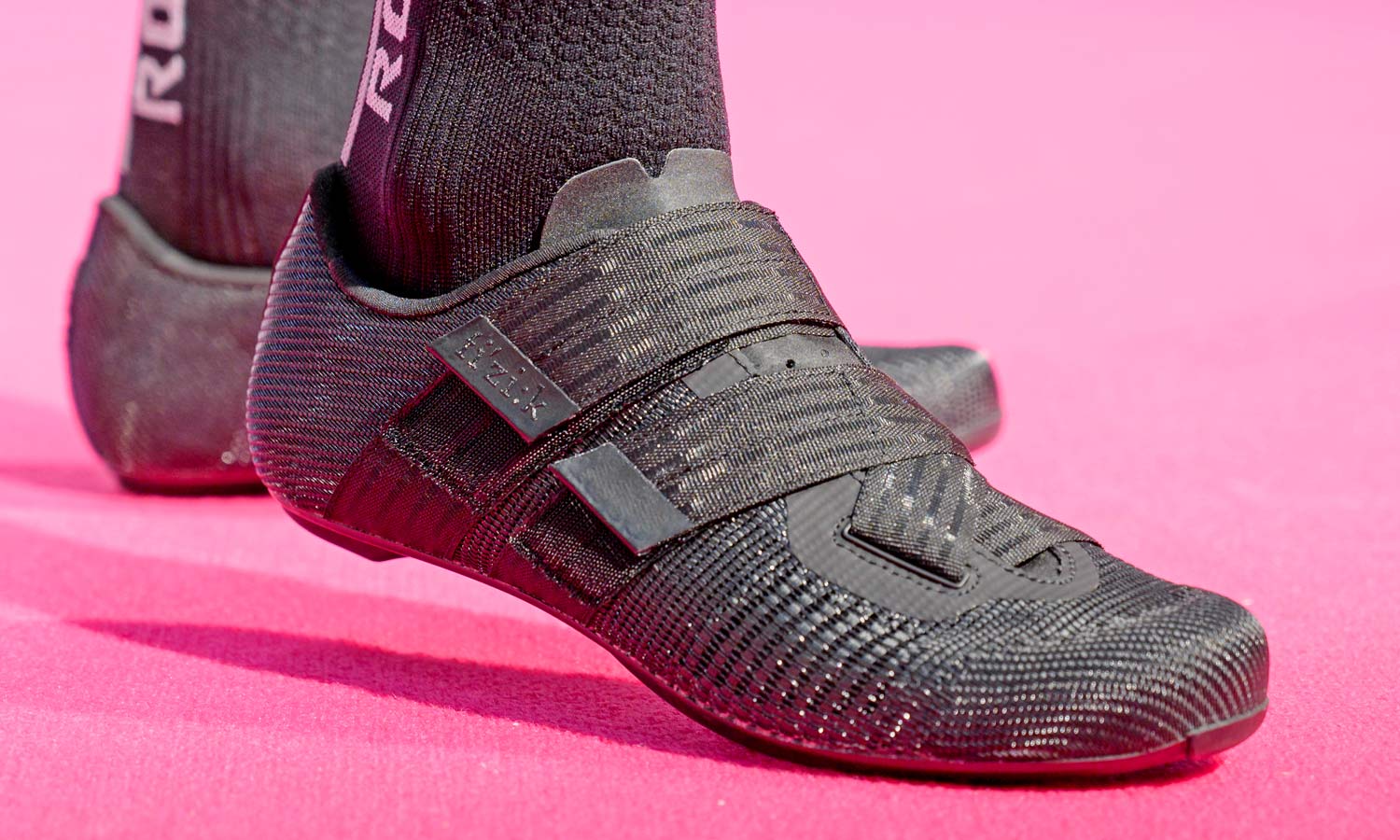 Watching along for the entire livestream of the press conference, the trend of many new e-bikes and a move towards ‘urban mobility’ bikes was clear. But there were also several smaller interesting products that we will look forward to learning more about. 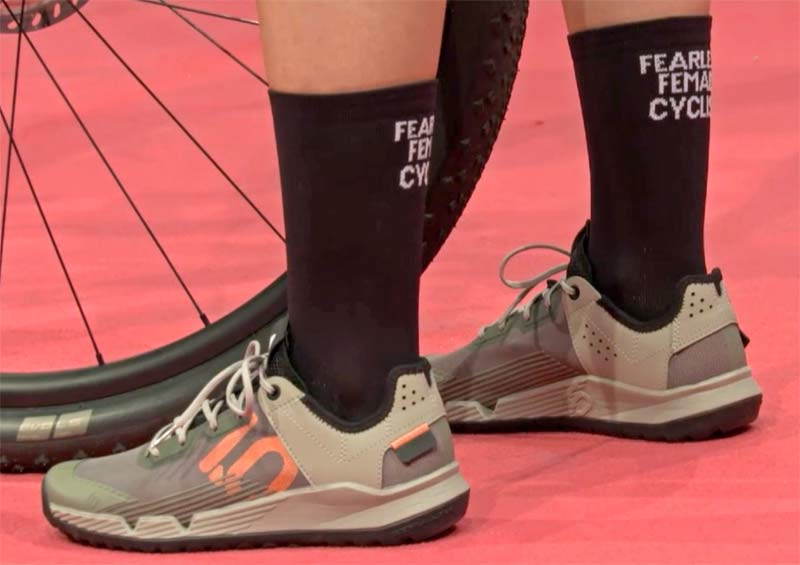 Another new pair of shoes on the feet of this ‘Fearless Female Cyclist’ (socks by Veloine) are a pair of sticky flat-soled FiveTen Trailcross LT kicks. 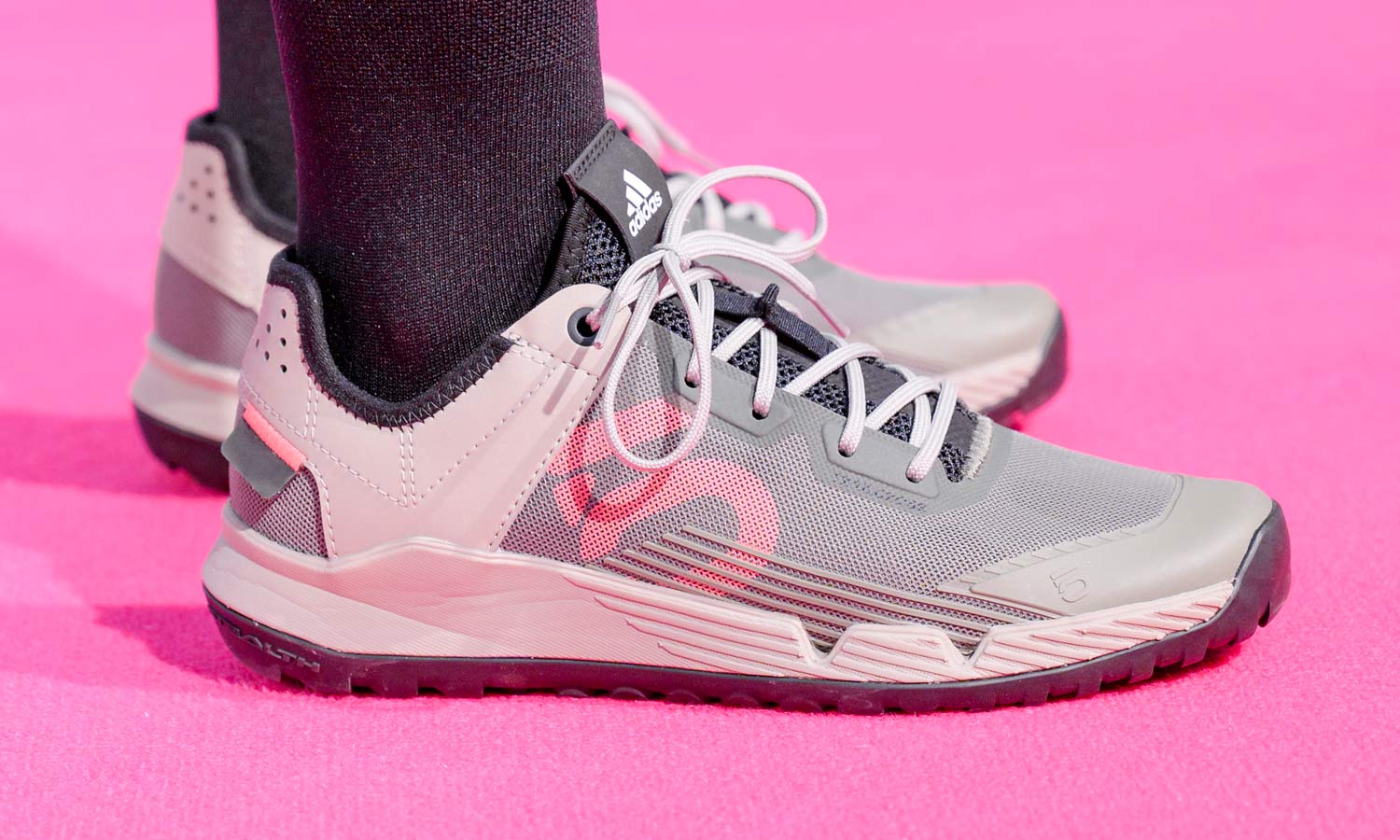 We saw them earlier this summer with no availability date in sight, but maybe Eurobike will give us an update.

We’ve seen plenty on Bosch’s latest generation e-bike power train and its new Kiox cycling computer with more tracking and connectivity power. But apparently the snap-on head unit can also be used as a digital key when set up with the companion mobile app, so when you walk away with the head unit, it disables the e-bike function entirely, turning it into just a really heavy bike to deter theft. 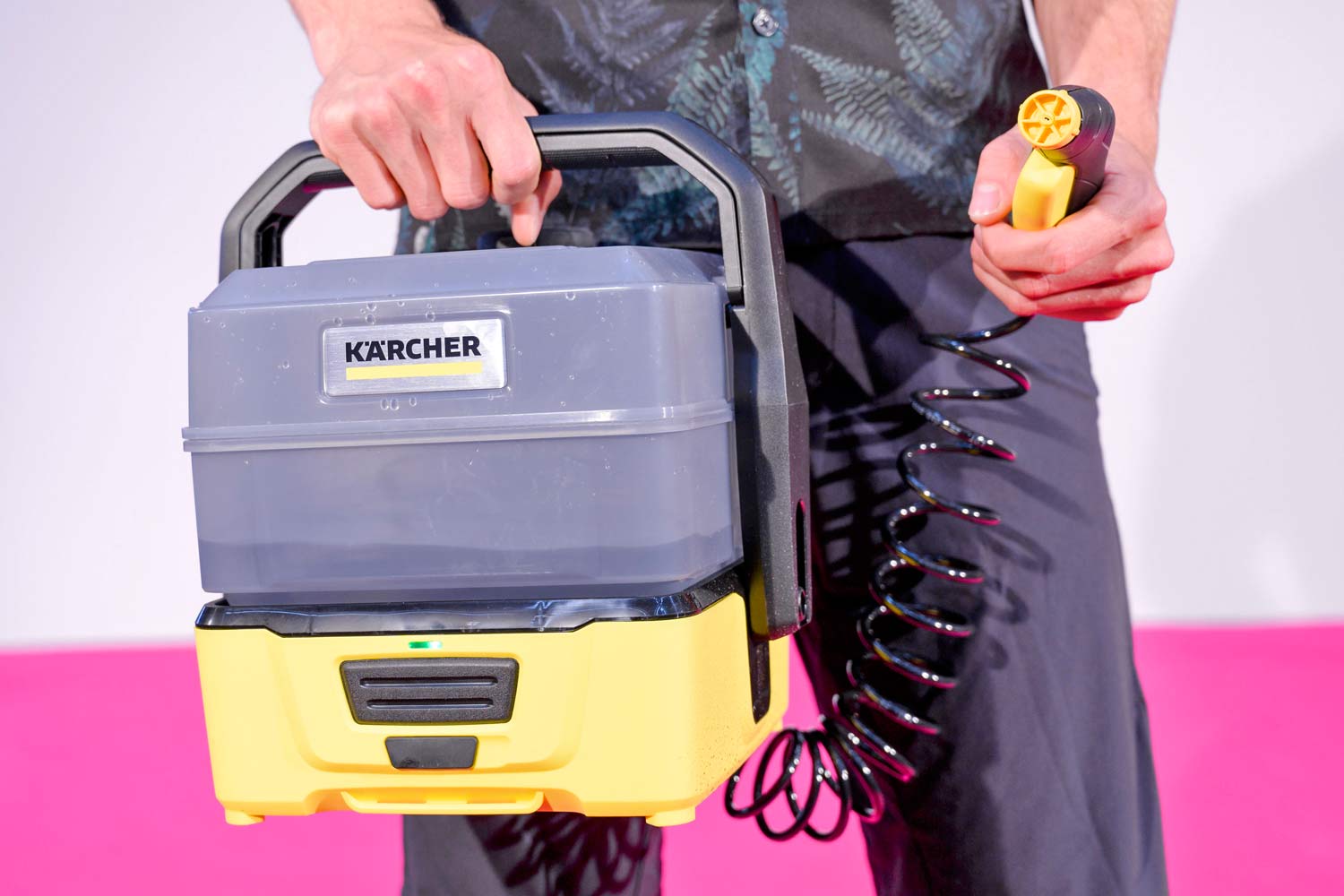 Lastly out of the small stuff, I had to laugh when they showed the latest Kärcher OC 3 Plus battery powered mini pressure washer, and then proceeded to start hosing off the show organizer’s bike on the floor right in front of the press conference stage 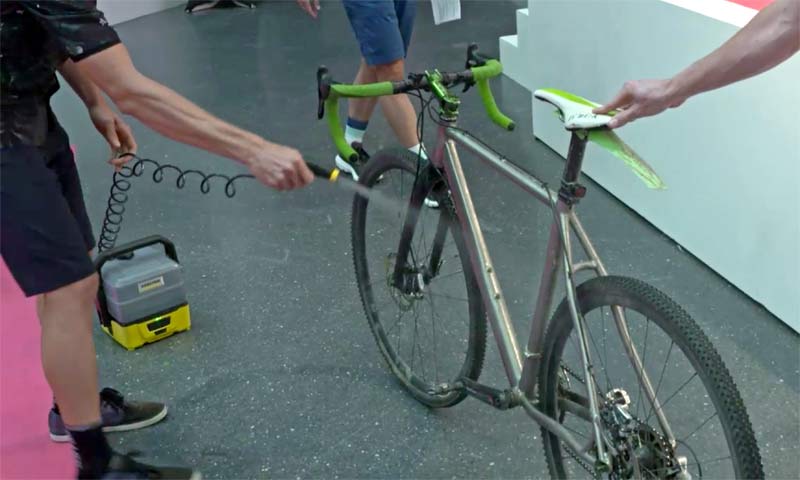 I hope someone apologized for the mess to the maintenance staff. 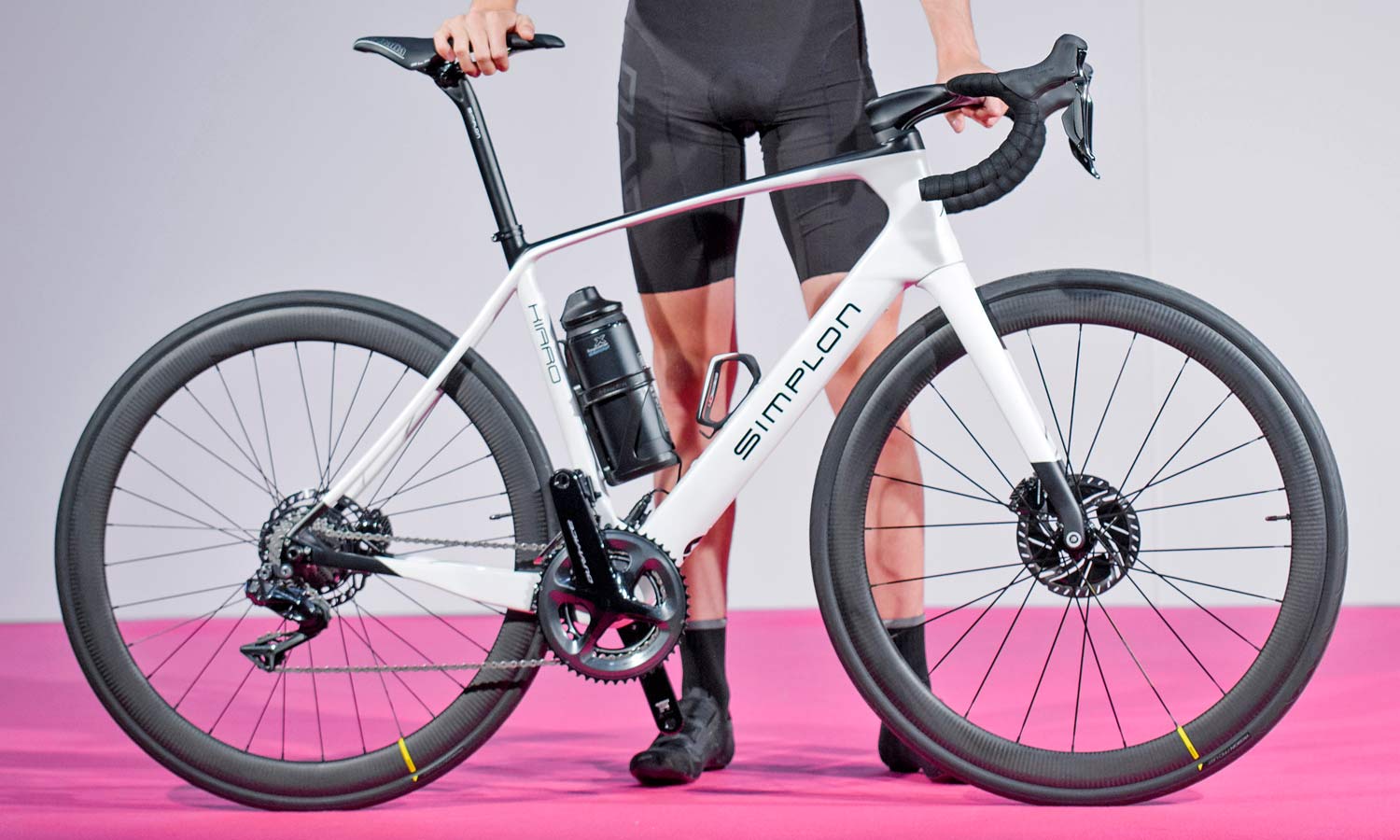 A couple of the new e-bikes revealed are actually an electrified version of bikes we first saw as standard pedal bikes, like this white Simplon Kiaro PMax which adds a hub motor and bottle battery pack to the endurance carbon Kiaro we saw at the start of this year. 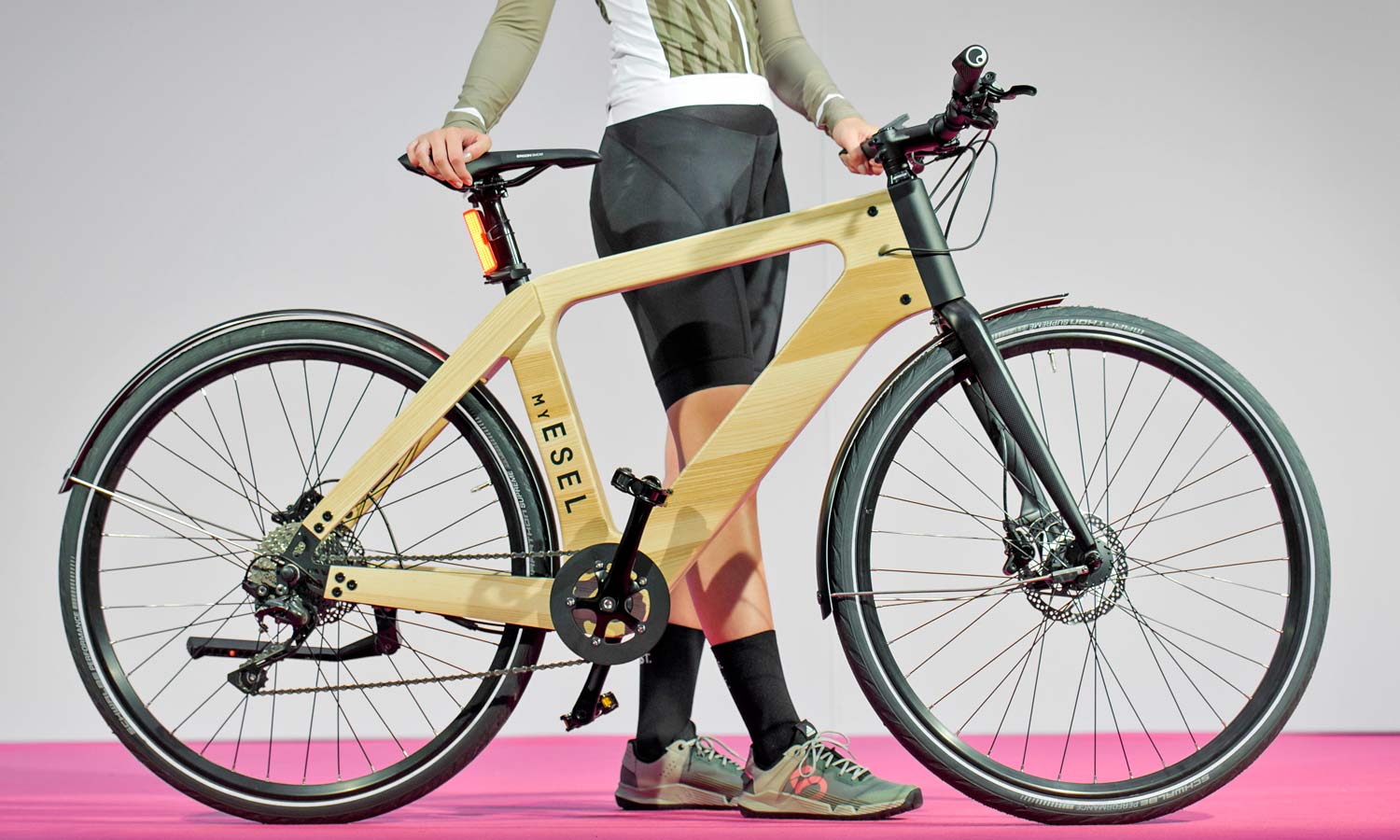 Or there is this customizable plywood-based My Esel e-Tour Diamant that essentially does the same thing adding a hub motor to the customizable geometry of the original My Esel.

Final outlook of what to come at Eurobike for performance bikes? 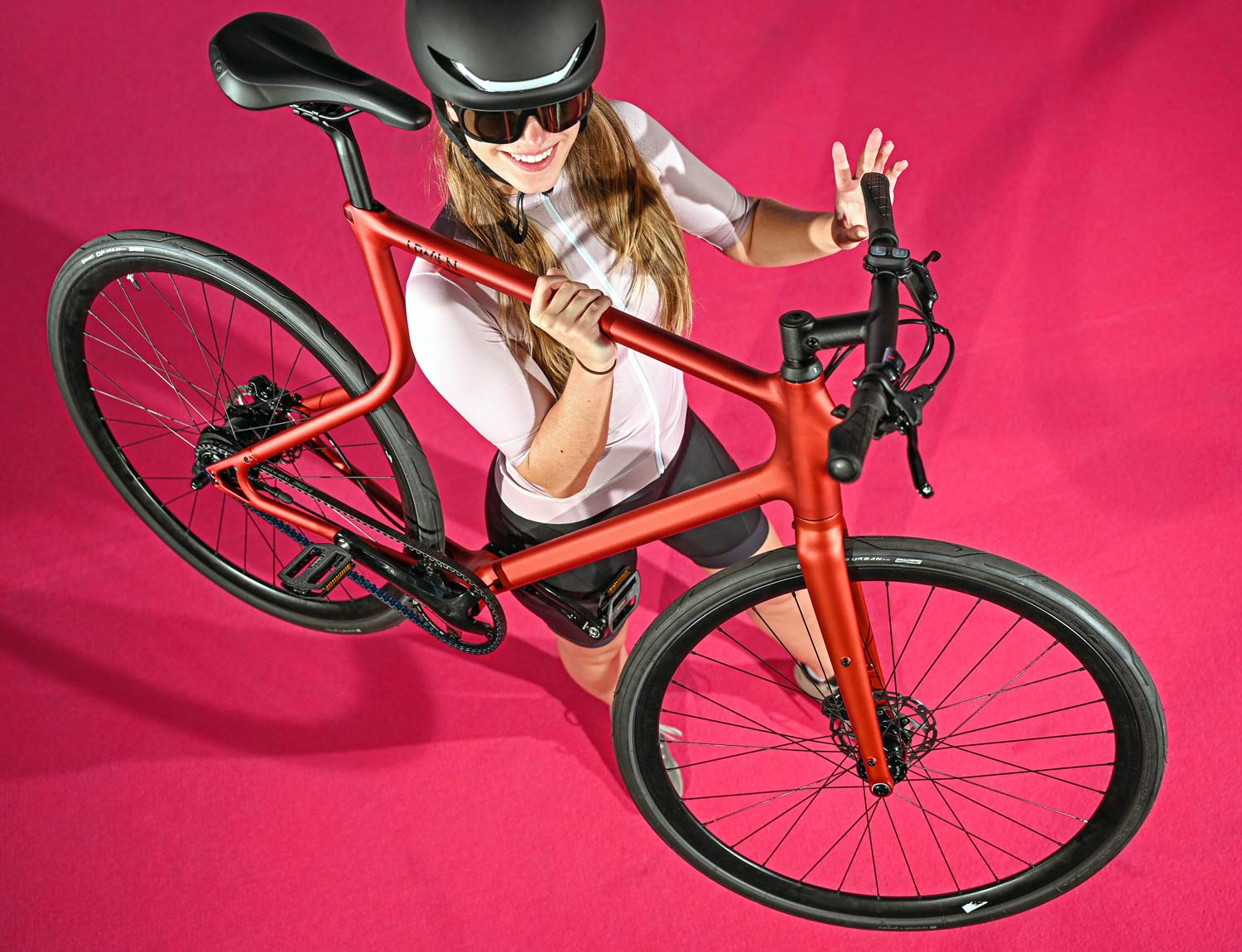 Looking at the proper performance ‘cycling-as-sport’ trends, we’re reminded of the perpetual news cycle where new products are released all year long, not simply at a trade show once a year. In Eurobike’s 2019 tease where a number of new bikes & products we’ve already covered in-depth, like:

We are sure there will be tons of new tech gear to dig up at the show, so mark your calendars: Eurobike runs next week from September 4-7. We’ll be on the ground and shaking the trees to find the latest & greatest. And as usual, you can expect to find the most in-depth detailed coverage of the latest cycling technology here on Bikerumor.com. Keep hitting refresh to stay up-to-date on what’s coming!

Is the last picture a modern, hybrid version of the Kestrel 500sci?????