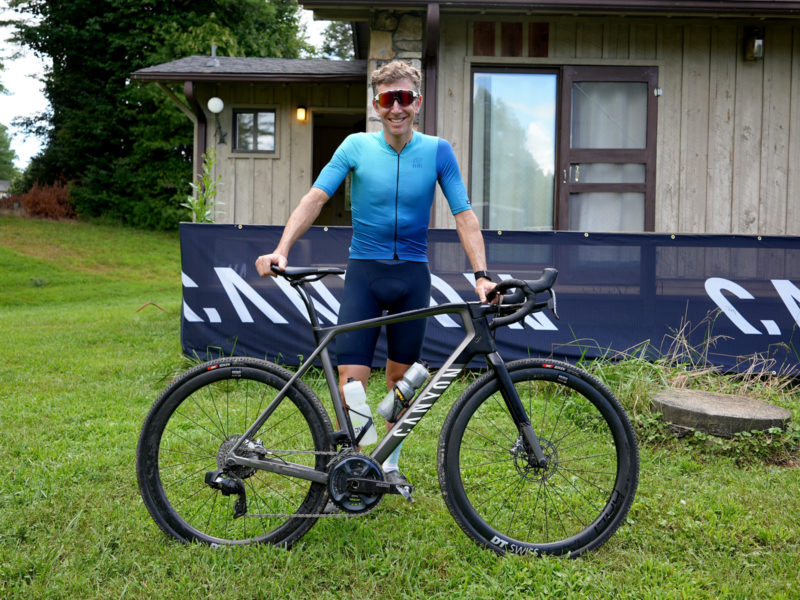 If there was ever a racer who quite literally pushed their equipment to the extremes, it’s Jeremiah Bishop. His Canyon Grail has carried him thousands of miles across some of the hardest terrain as he’s ridden and filmed the Impossible Routes series. It’s also his race bike, carrying him across the line at SBT GRVL the week before to a 27th place finish.

Then again the next weekend at Belgian Waffle Ride to a 7th place finish. All aboard a bike with not only a mixed drivetrain, but also mixed brake setup, and some clever hacks and interesting parts selections… 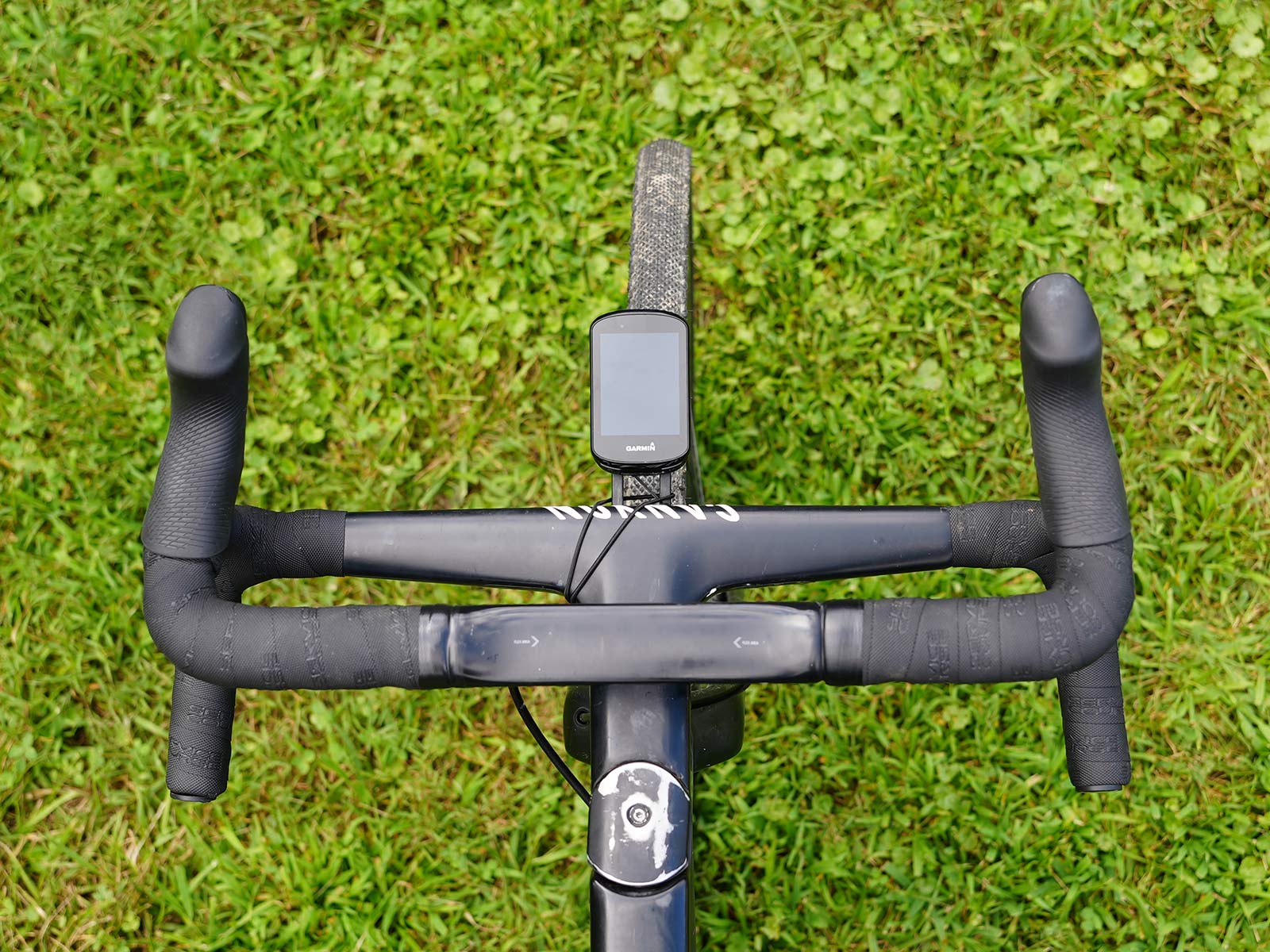 Canyon’s double-decker gravel handlebar is interesting on its own. JB added an outfront mount with leash for his Garmin GPS cycling computer. Note the worn paint on the steerer tube cap…he likens it to the sweet, battle-scarred finish of Boba Fett’s gunship. 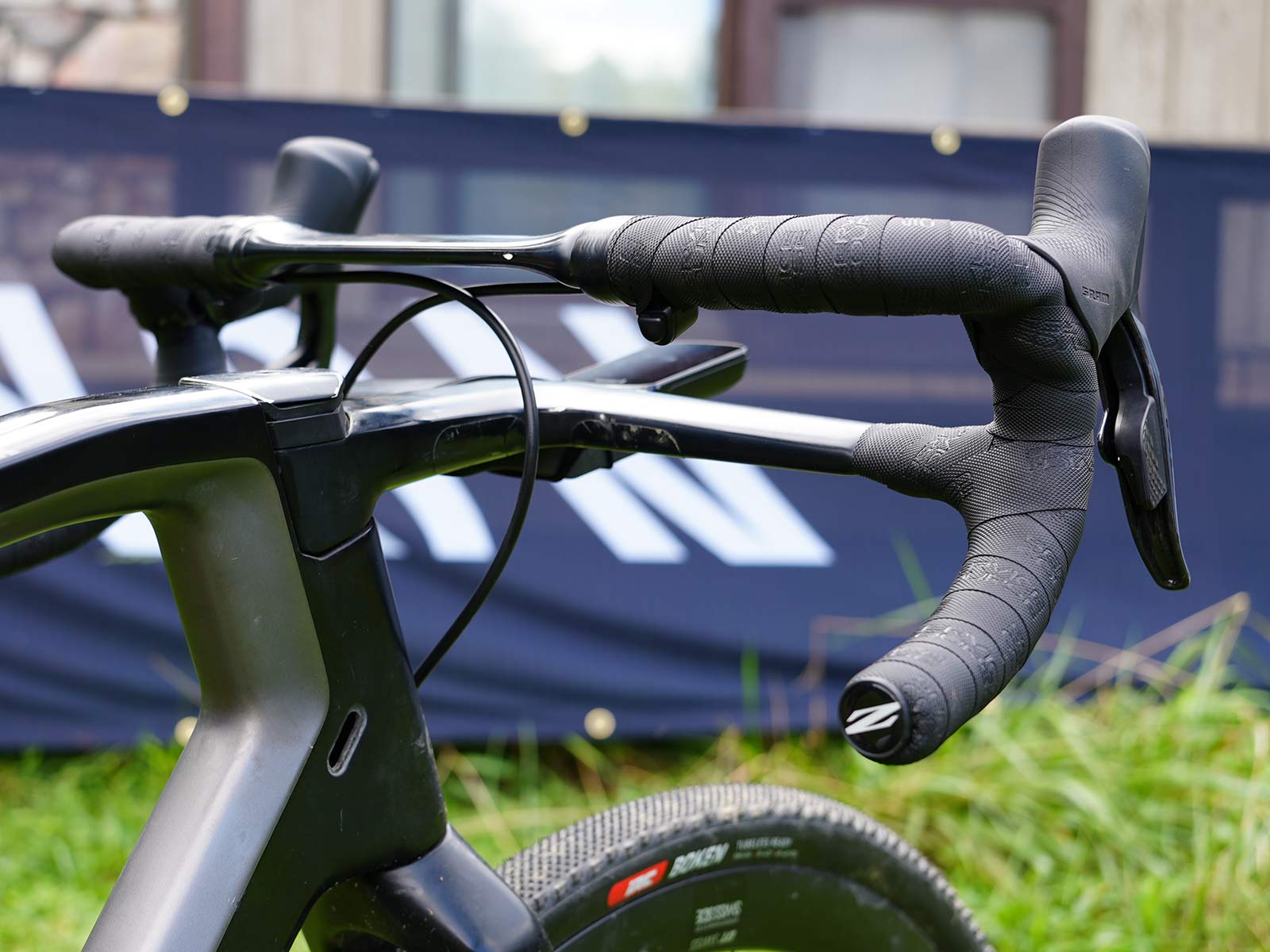 Frame protection tape is placed where the brake hoses rub during cornering and on rough terrain. He mounted the SRAM MultiClics remote shift buttons under the top bar. Those are linked to the SRAM Red AXS shifters…

He’s running a middle-of-the-range 10-33 12-speed cassette with the 36-tooth compatible rear derailleur, but… 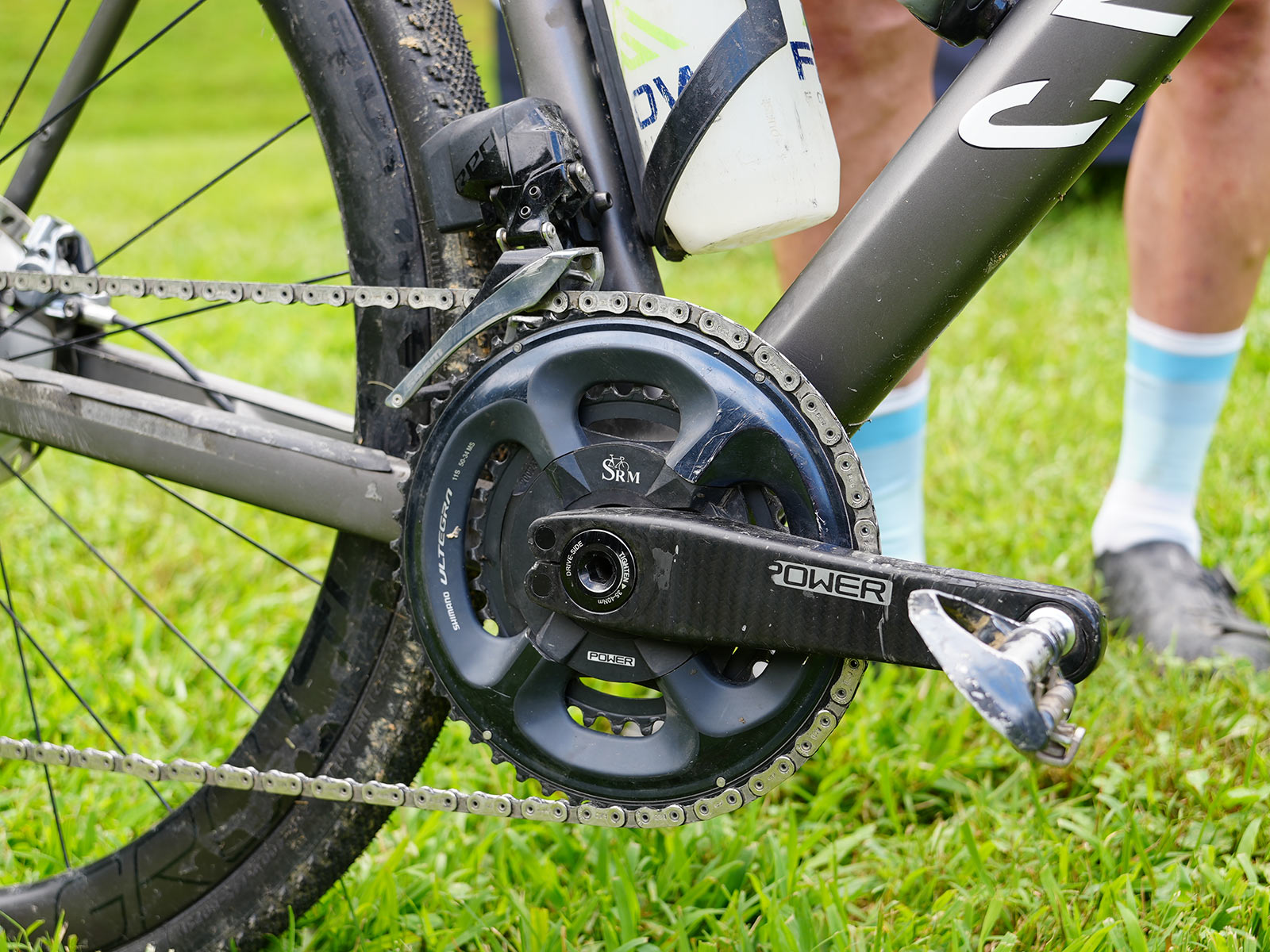 …those are paired with an SRM powermeter on the Look carbon fiber cranks, with Shimano Ultegra 50/34 11-speed chainrings…and a SRAM Flattop 12-speed chain. 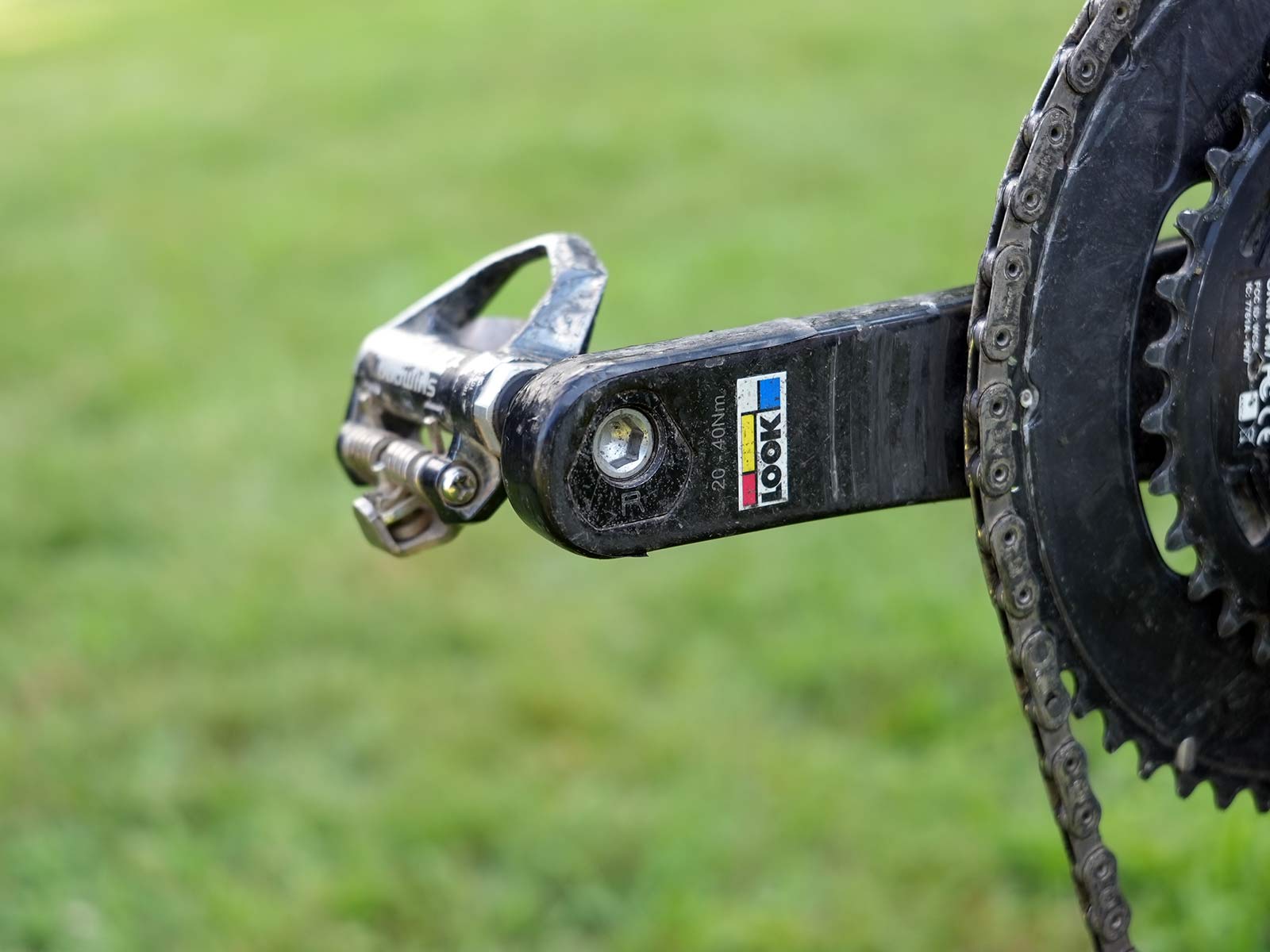 Jeremiah doesn’t have a drivetrain sponsor, so he’s free to run what he wants. And he likes the ability to adjust the crankarm length with the SRM/Look carbon cranks, which use triangular inserts to give you 170, 172.5, and 175mm effective crank lengths all from the same arms. 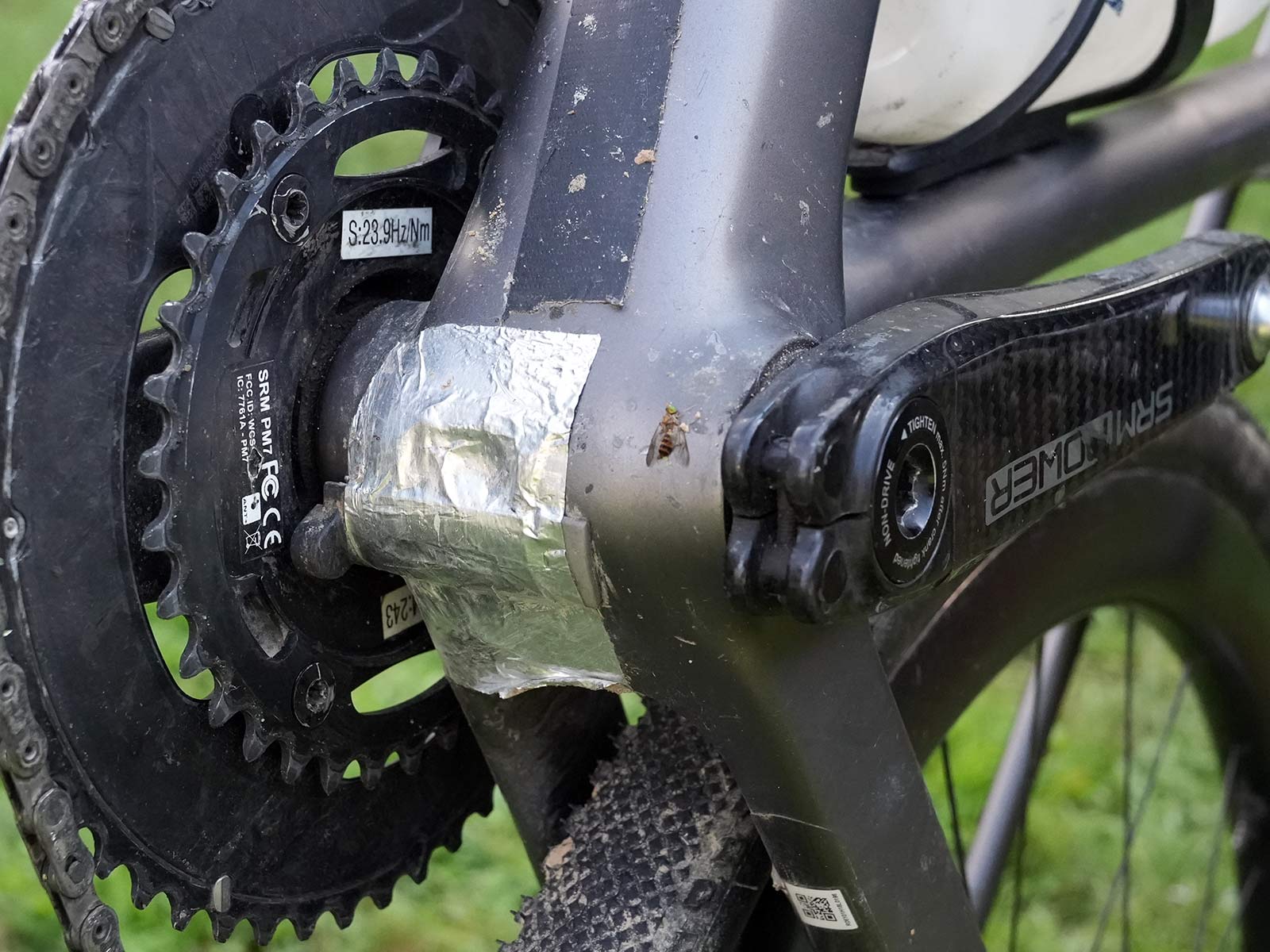 The cadence/rotation sensor’s magnet is taped under his bottom bracket. And yeah, he’s so fast that he’s smashing bugs. 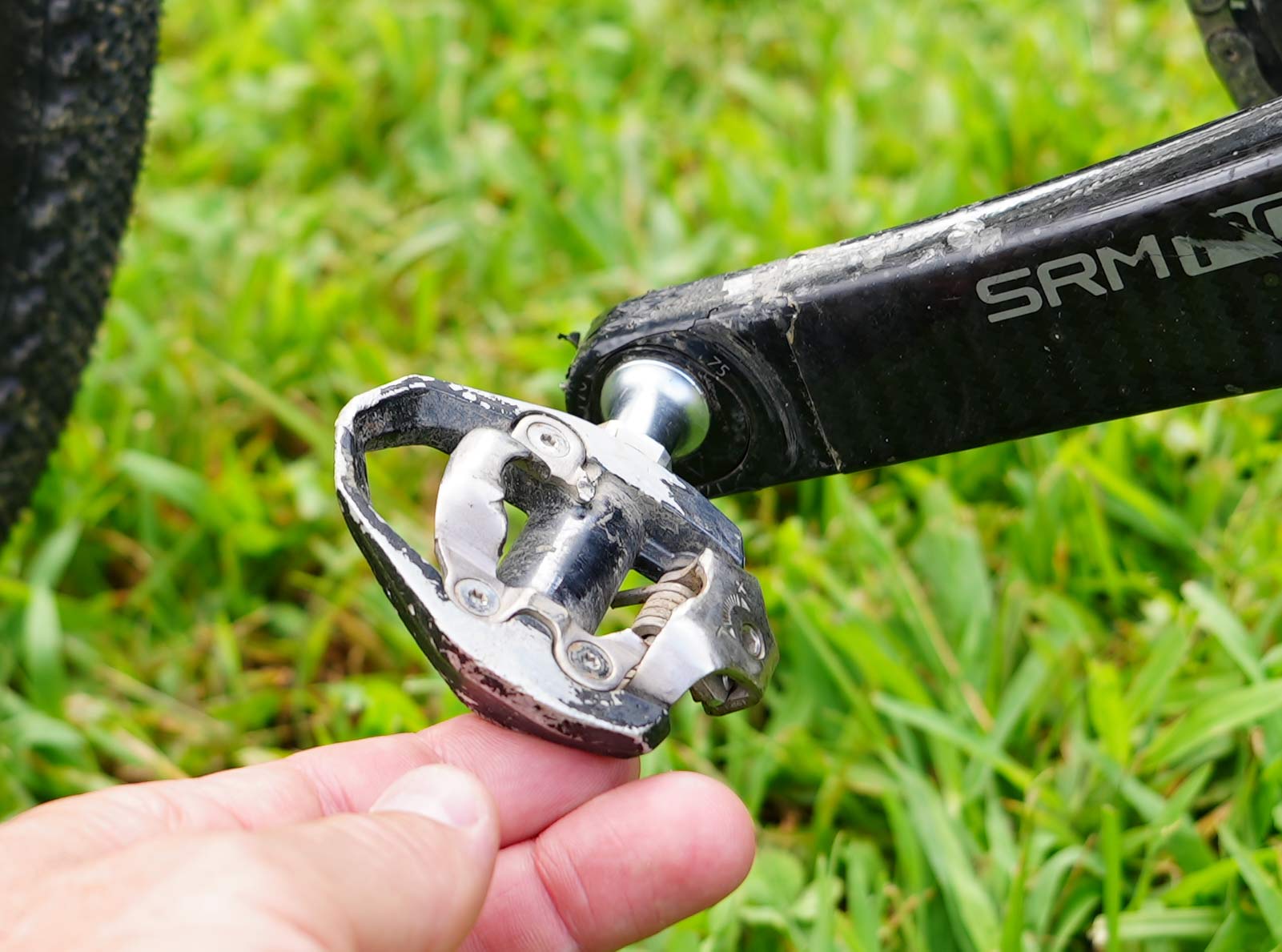 Another interesting component choice are the Shimano PD-ES600 pedals. These were originally intended for touring bikes and use a road-like shape with single-sided design. They come in around 279g for the pair, making them Shimano’s lightest road bike pedals…mainly thanks to the slim design that uses their SPD mountain bike cleats instead of the larger SPD-R cleats.

Note the well-worn electrical tape wrapped around the crank’s end.

The problem with not having a drivetrain sponsor is that, sometimes, you’ve gotta dig through your parts bin or grab whatever’s in stock. He needed a rear brake rotor, and the Shimano rotor was all he could get.

Seriously, somebody check the scoreboards and his work with the Impossible Routes video series and sponsor Jeremiah Bishop…he’s like one of the nicest, most approachable, hardest working athletes in the sport. And he’s fast AF. 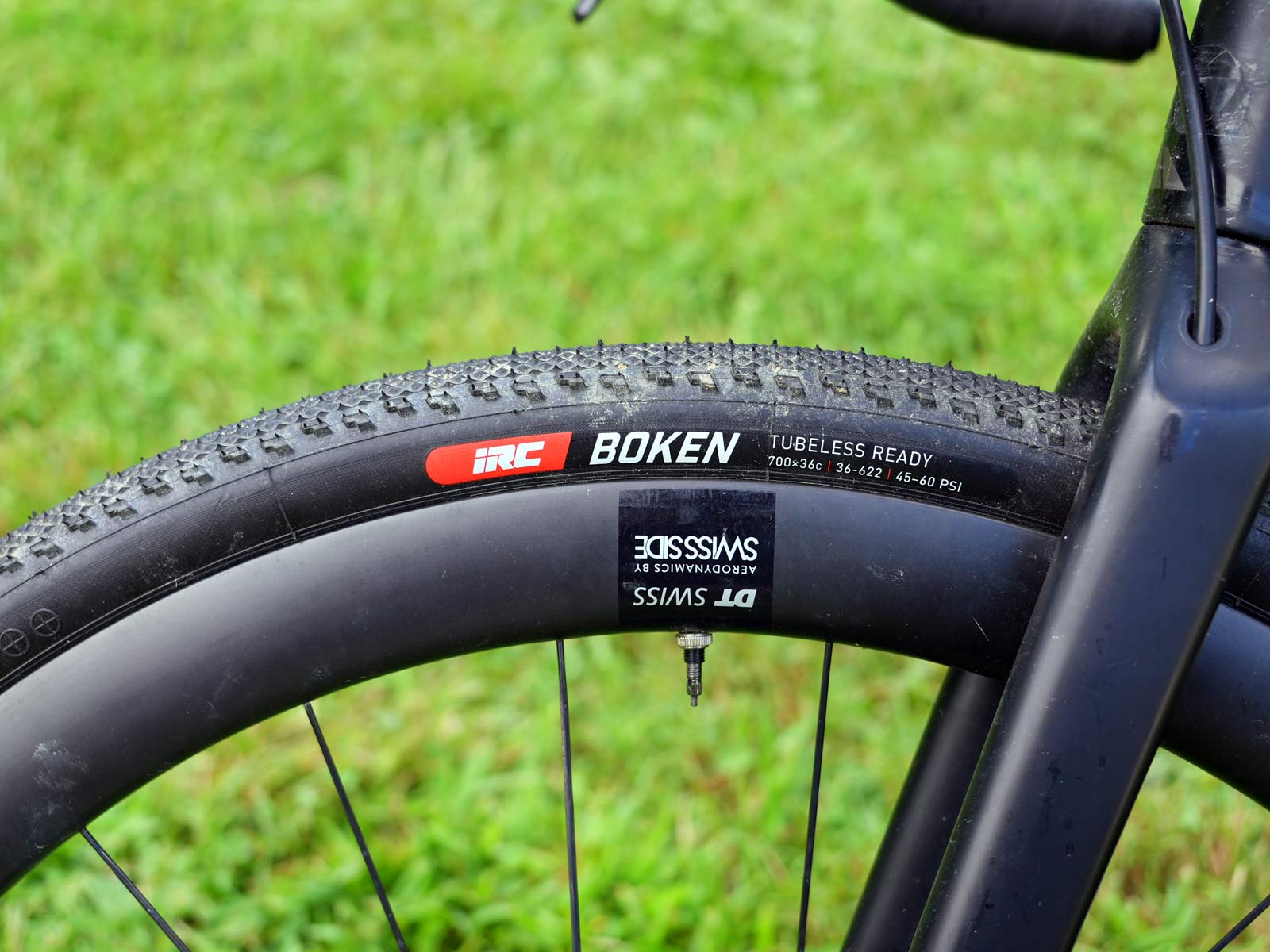 JB was running IRC Boken 700×36 tires, which were some of the narrowest we saw on almost anyone’s bikes, pros included (I ran 700×33, which I’ll explain in a separate post on my own race bike…stay tuned).

These were mounted on DT Swiss GRC 1400, which are their latest wide, aero gravel bike wheels designed specifically for bigger, wider tires.

The last few touches are an Ergon saddle and Topeak bottle cages with a bit of black duct tape wrapped around the edges to add a bit more friction and tightness. He says if you haven’t dropped a bottle riding gravel, you’re not riding hard enough. Cheers to that!

Used to be a “TSR” (Team Second Hand Racing) or “BaAJ” (Broke as a Joke)…while I am sure not the case – all the more pride in a win or KOM or what ever. Today, I am blessed to ride the stuff of the Pros (when I was young, not so much)….(when I did ride for a big company…the BEST bike parts were what ever were on our bikes…FREE!).

This is the soul of the sport.

What sunglasses is he wearing?

Wait, I thought you couldn’t run a Sram 12 speed flat top chain with Shimano 11 speed chainrings. What does he know that everyone else doesn’t? I wonder what is the downside of doing this.

Seeing that chain/chain ring combo surprised me too. I thought the narrower inner width and larger dia rollers of the flat top chain would be incompatible with 11spd rings. So went googling a bit and this thread seems to indicate that at least on the chain ring side of things the flat top chain may work with 11spd rings.
https://www.trainerroad.com/forum/t/sram-axs-and-aftermarket-rings-5-bolt-110-bcd/56473/3

How many different 12 speed chains are there now? SRAM having two… the need for flat top is suspect when other drive train mfr have 12 and 13 speed groups with conventional chains.

Thanks for the link. I did a little more digging and this is what I learned. The pitch (center to center distance) of the rollers is the same between both chains. I measured a Shimano 11 speed chain and the roller diameter was 0.298″. According to the link, the diameter of the rollers on the SRAM flat top chain is 0.0065″ larger, so the diameter of the rollers on the flat top chain should be about 0.305″ (if your round up). That is a very small difference and is only about 2% larger. With all that said, it seems totally reasonable that the flat top would mate pretty well on shimano chainrings. Will it be optimal and will it shift as well as a set of SRAM chainrings? Probably not, but I clearly it works.

None Given
Reply to  Chris

Interesting to learn the shimano rings work acceptably with the SRAM chain. The wonky chainring gearing is one of the things I’ve never liked about AXS.