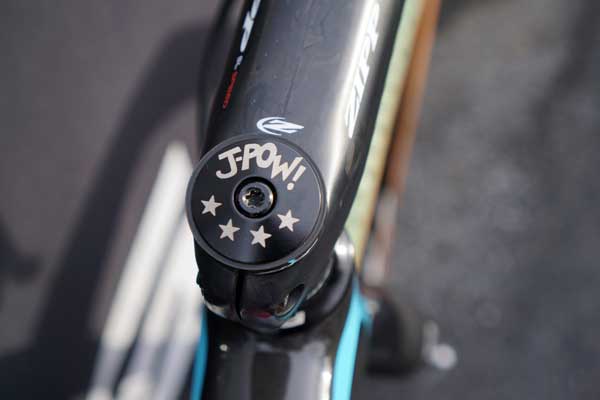 Jeremy Powers (aka JPow) needs no introduction, but just in case, here’s the short of it: He’s 4x US National Champion and has more than 60 UCI race wins to his name. He’s also a super nice guy, infinitely approachable in the pits. Check the video below and detail shots of his bike (including some prototype FMB tubulars), followed by a few shots of teammate Ellen Rose Noble’s race bike, too… The Rapha/Focus team bikes get their signature look by Victory Circle Graphics. According to SRAM, Jeremy’s one of the very few of their sponsored athletes racing ‘cross with a double chainring and not 1x. They say he likes the extra range of having two speeds up front, but he was also a RED eTap test pilot and so he continues to run it. Fizik handles the bar tape and saddle (Aliante VS with carbon rails). Zipp props up the rest of the cockpit.

Crank Brothers Candy pedals are on most of the bikes we’ve seen out here. The Focus Mares CX comes with a removable  plate behind the chainrings to keep the chain from falling off the inside. These FMB tubulars were custom made using half the latex layering in exterior sidewalls to make them more supple. They also have a higher silica content in the green tread to improve grip on the frozen terrain. Jeremy will run 12 to 16 psi depending on conditions, which is the lowest of any pro athlete we spoke to at CX Nats. Ellen Noble’s bike was very dirty following a partial practice lap on Friday. Conditions have changed dramatically for Saturday’s races, with snow covering (and continuing to cover) the course, but Friday’s rides were packing the mud on quickly. This was from just 2/3 of one lap… Ellen’s bike was set up very similarly with the exception of using SRAM Force 1 rather than eTap. As of this post, she’s leading the U23 UCI World Cup series.