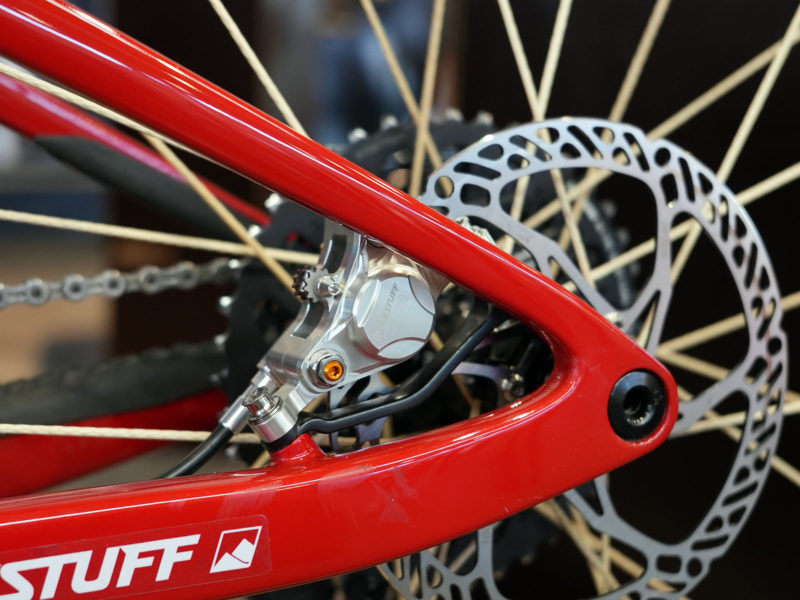 If you ride Centerlock brake rotors, you fall into two camps: Those that haven’t had a problem, and those that have had it come loose on a ride. While there are a couple of mini tools that can re-tighten a Centerlock bolt, the better solution is to not let it come loose in the first place, and that’s what Trickstuff is working on.

But if you missed it, you’ll have to wait. Trickstuff asked us politely to remove the Centerlock kit until they’re closer to launch Suffice to say it’s clever. For now, though, we can tell you about their updated 2- and 4-piston road and mountain bike brakes… 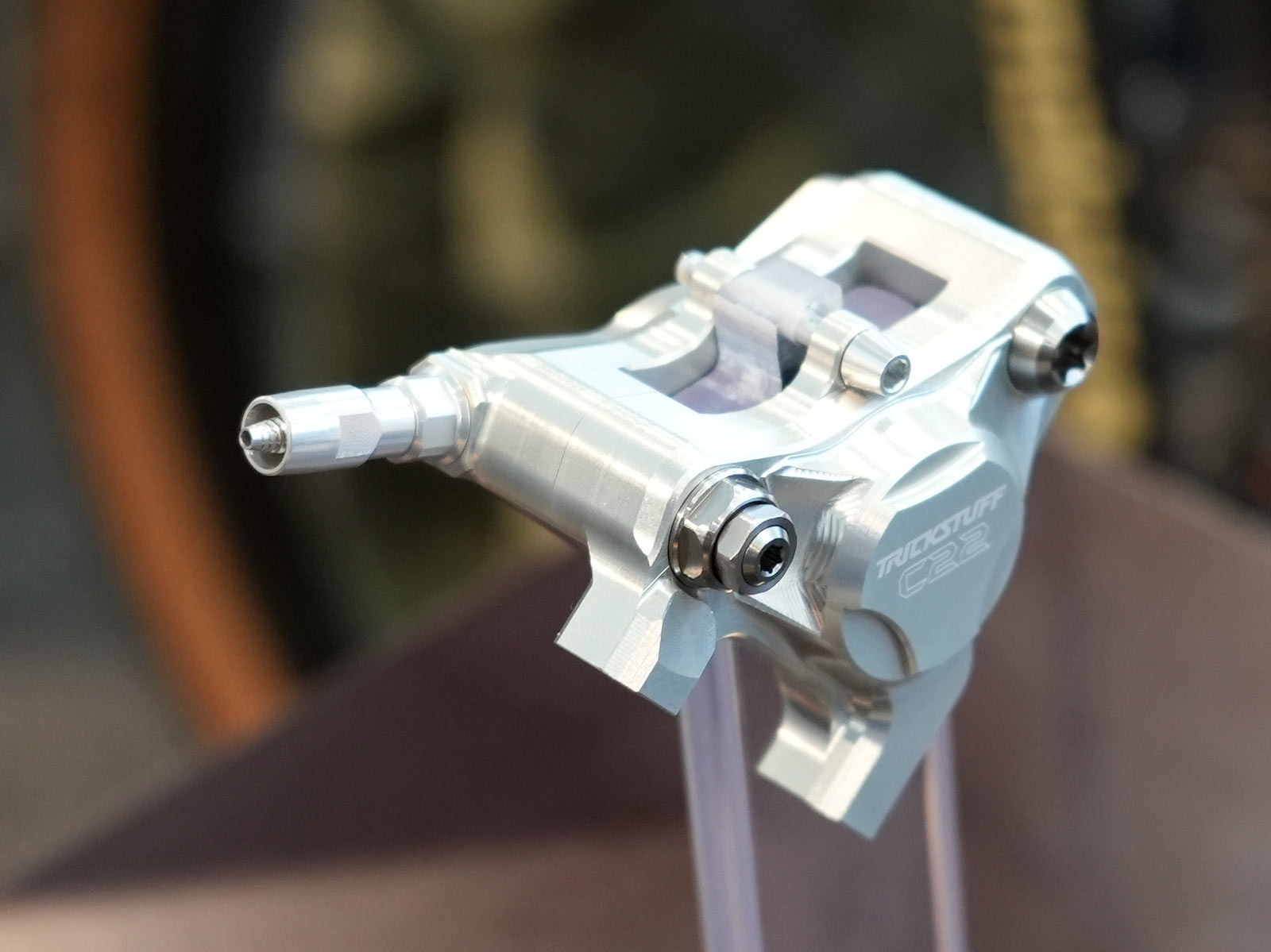 Trickstuff has updated their 2-piston C22 caliper, aimed at road and gravel bikes (and XC) with a bigger pad opening gap, helping it fit more bikes better since the flat mount standard is, um, not quite standard enough. So, there’s more space to adjust it to prevent the rotor rubbing on the caliper body: 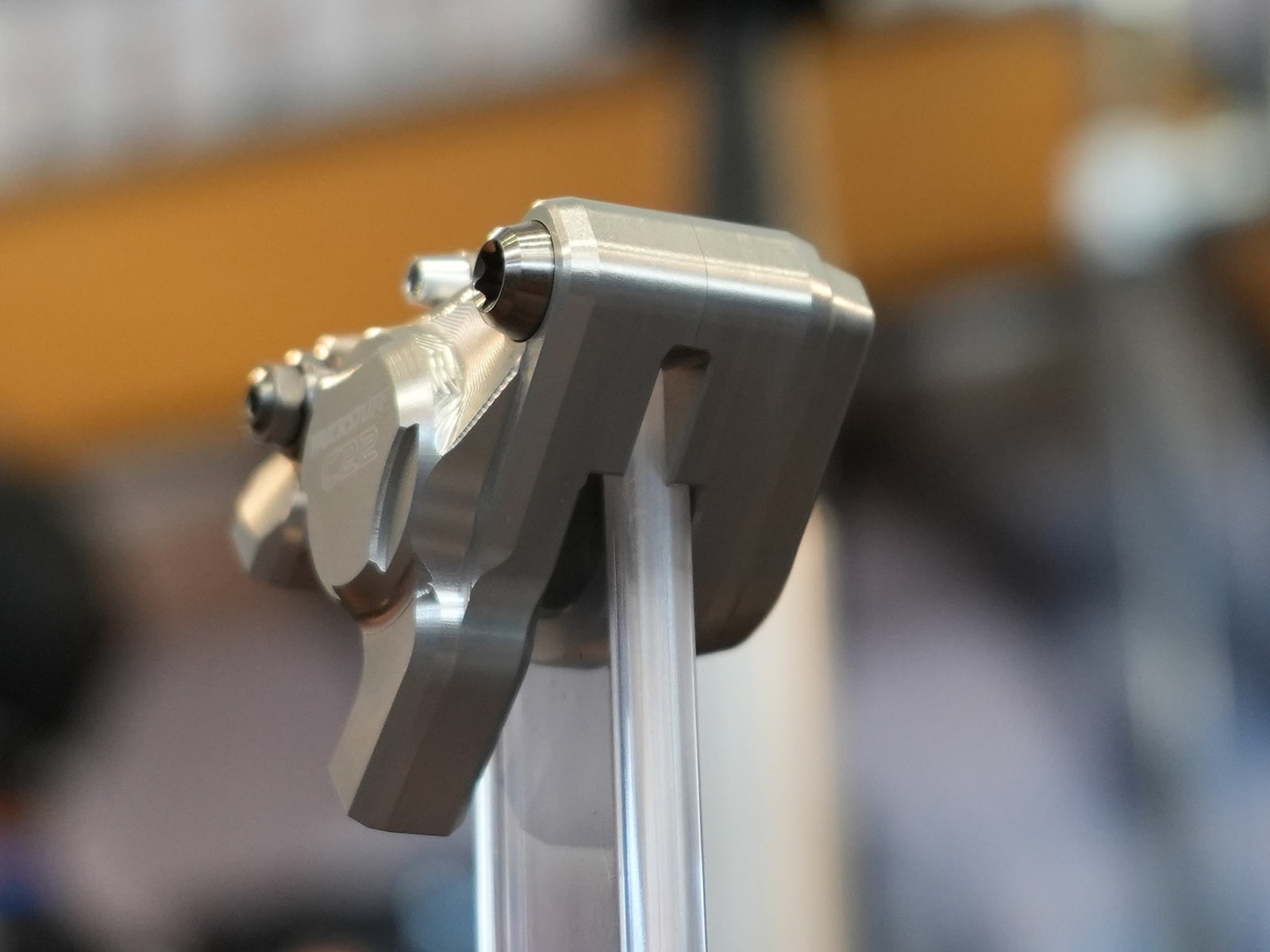 They also gave it a refined Shimano hose attachment, making it easier to plug and play directly to that brand’s hoses. They also have SRAM versions, but we asked, why would someone want to replace a Shimano road brake caliper? They say it has more power than Shimano’s brakes, but admit that not everyone wants their brakes to be more powerful on a road bike. But if you do, here’s an option.

It’s also available in post-mount versions, and there’s a new bleed Port with a separate nut to close flow, so you can attach the syringe, then open the port so that it won’t leak. 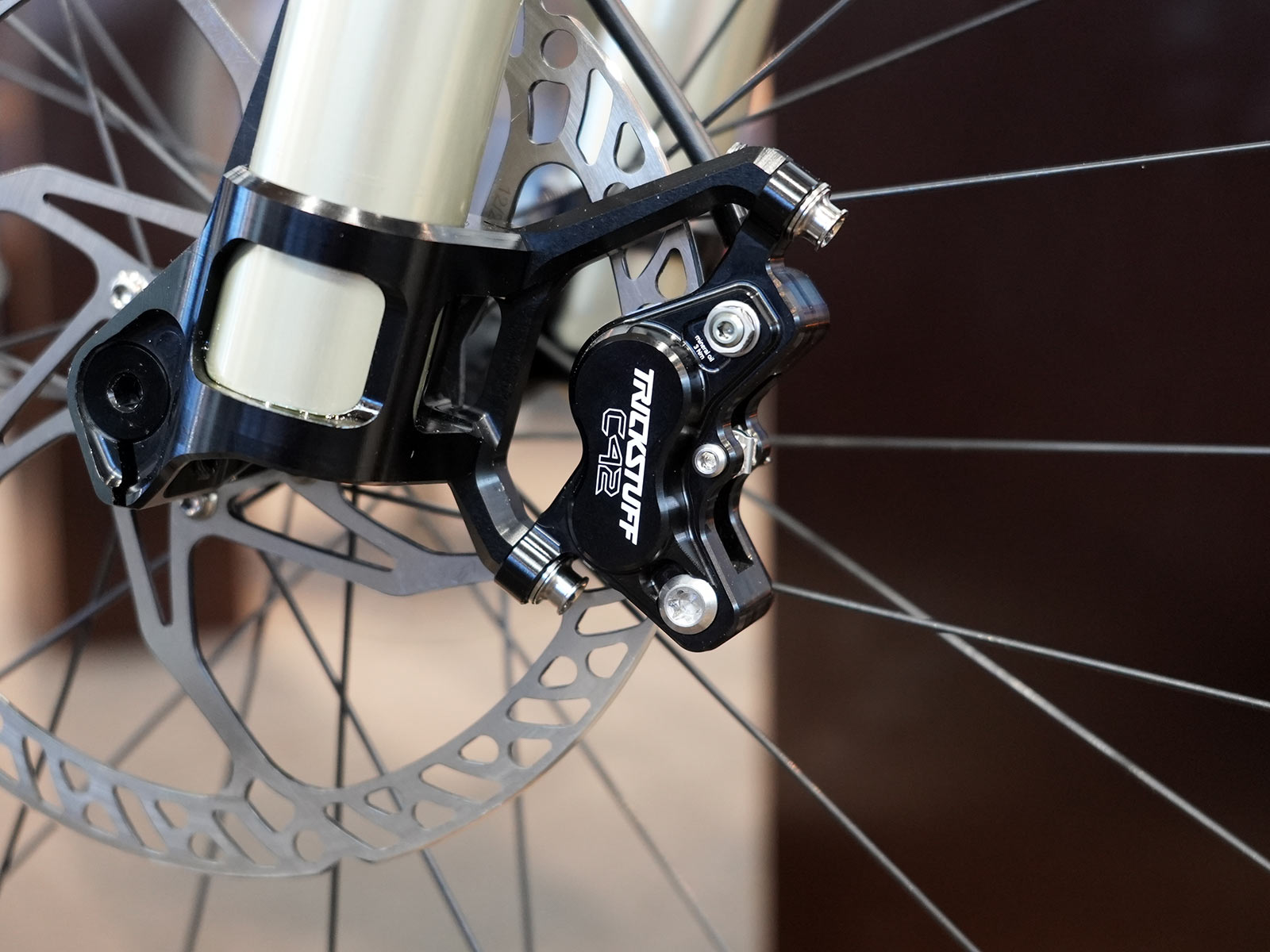 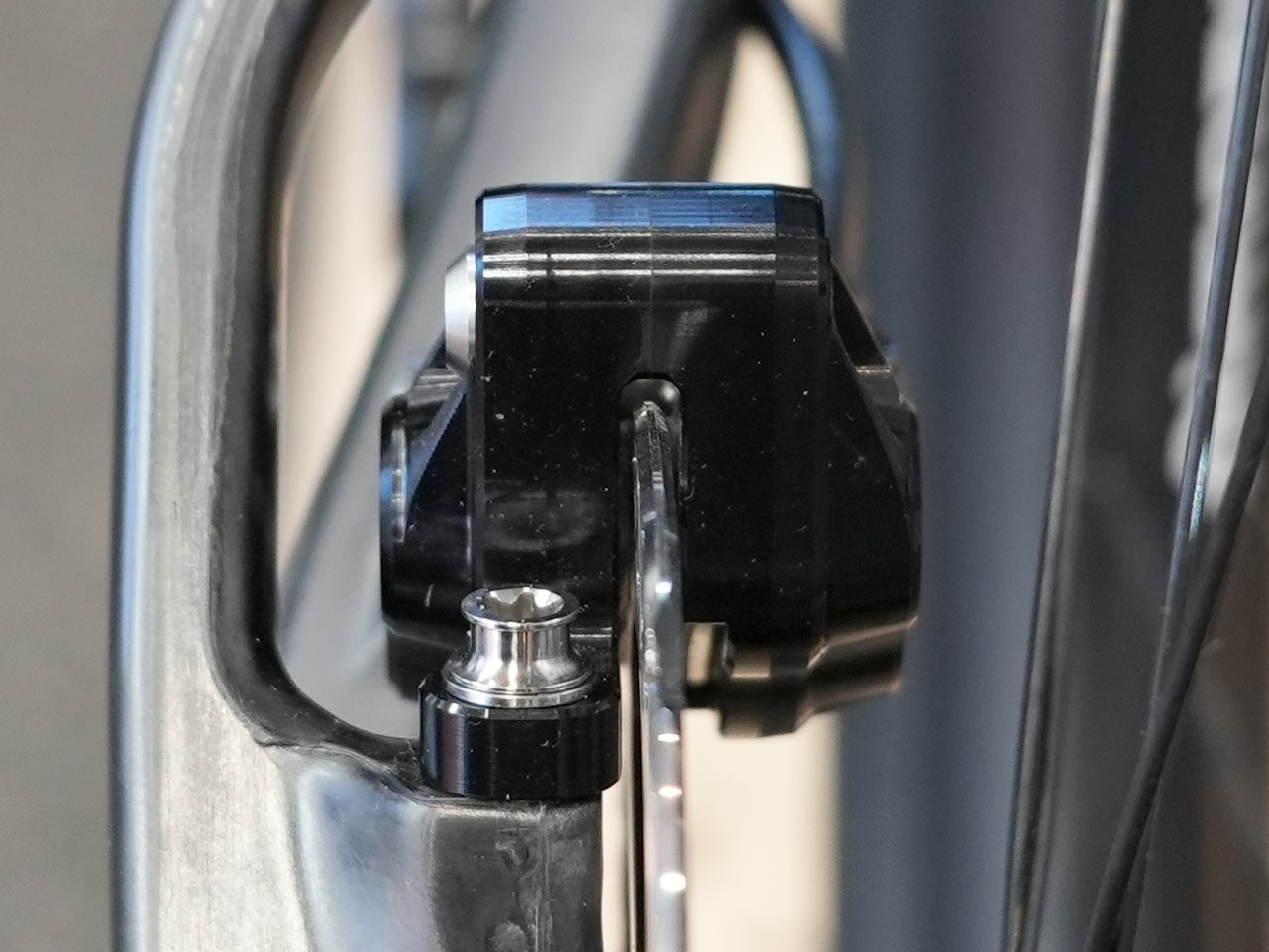 It gets a wider rotor slot to make it easier to mount on a wider variety of frames, too. These also get a new 850 pad shape that matches SRAM’s pads, so you can find replacements easier, even though they say their pad compounds are stronger. 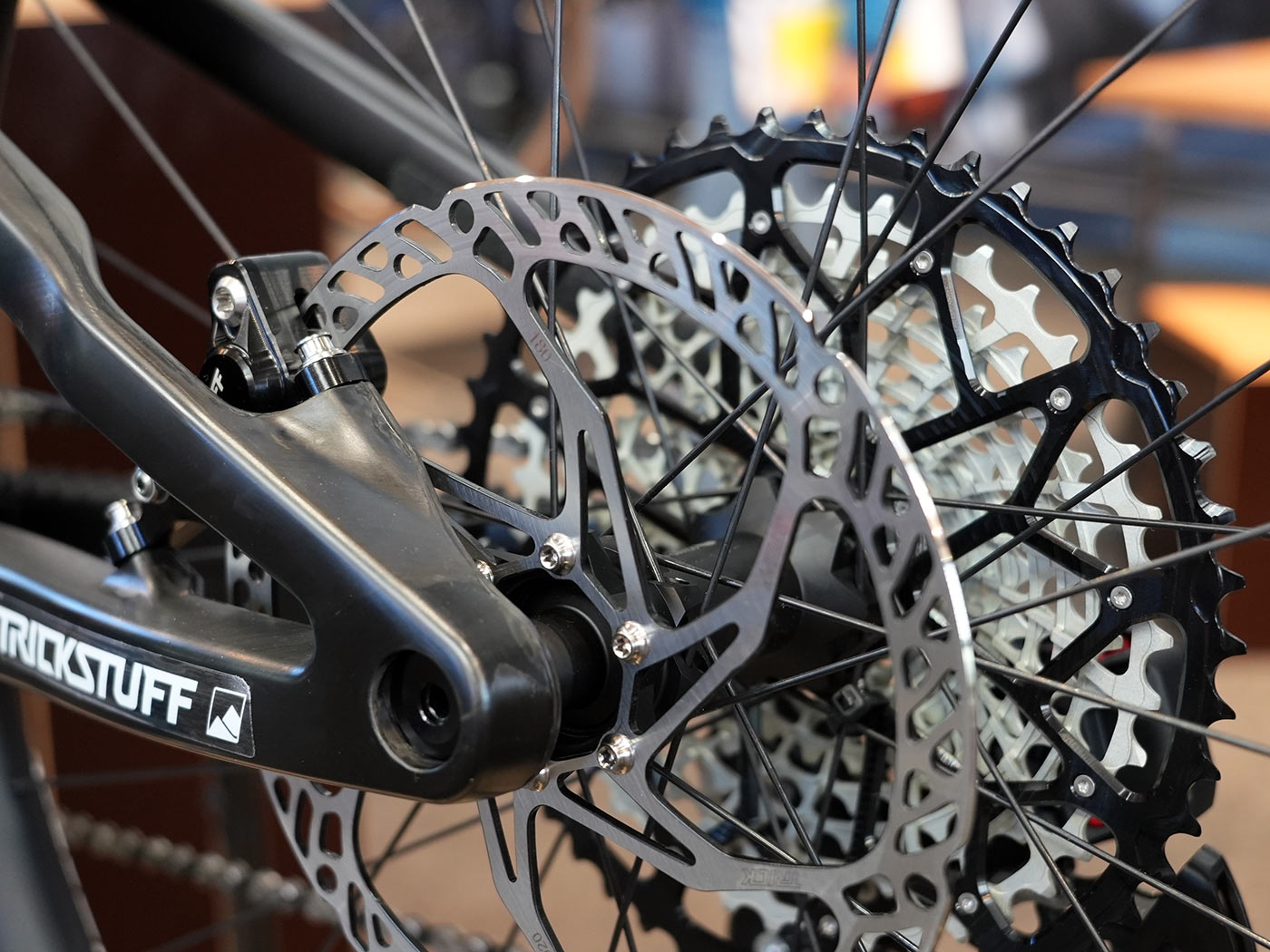 Notice that brake rotor profile from the prior photo? It’s nice and beveled to prevent it from cutting you, but it also shows off the thickness. Trickstuff’s says their brake rotors are thicker than the competition, which helps with heat management. The smaller 140mm and 160mm are 1.85mm thick, and the 180mm and larger are 2.05mm.

They come in two versions, the SL shown directly above, and the regular one for more aggressive riders shown at the top of this post. Claimed weights for a 180mm rotor are about 120g (SL) to 150g (regular).

They only make 6-bolt rotors at the moment, but say Centerlock rotors are on the way and will incorporate the Center Block locking design.

So is the center block for center lock rotors or 6 bolt? Either way, I have never experienced any loosening while riding CL or 6 bolt rotors.

Legitimately curious, as I’ve never run CenterLock rotors before: Do you use thread locker on the lockring?

Applying thread locker seems like it’s standard practice on brake rotor bolts, so I was wondering if it was the same for CenterLock.

I have 6 pairs of wheels for various bikes, all with center lock. Not one has ever loosened in many years of riding. Apparently I should be worried?

Well, that does mean that your riding is divided between up to six bikes. Probably one bike that you ride all the time would be more illustrative.

@Tim, I’ve had a centerlock rotor on the front wheel of my commuter bike for 5 years of daily riding. Torque the lock ring to spec and there’s no reason for it to come loose – 40Nm is a lot more than many people think. Even if the spline interface between the rotor and the hub is a bit loose and the lockring is wedging the rotor against the hub, braking action will work to tighten the lockring rather than loosen it.

I’m not saying loose centerlock rotors don’t happen, I’ve been on rides with friends whose rotor has come loose. But those same friends’ bikes had all sorts of other drivetrain setup and maintenance issues, which I don’t think is coincidental.

I think you mean beveled not bezeled