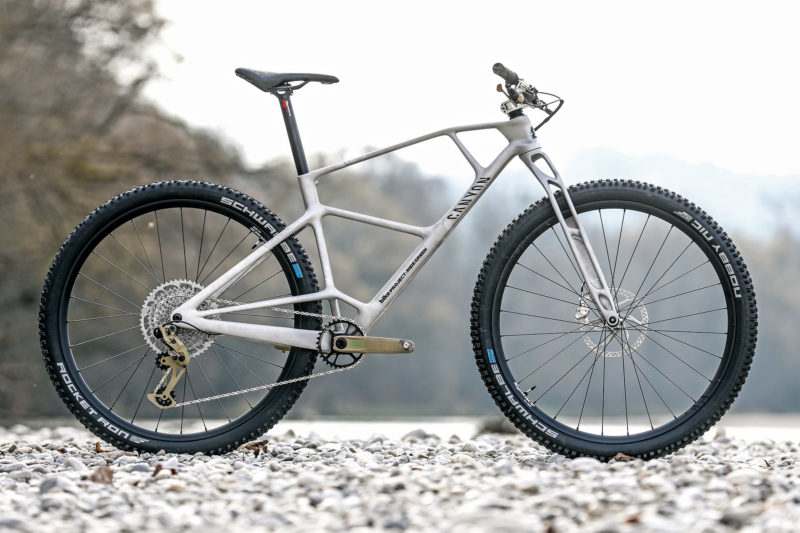 Canyon’s latest prototype mountain bike answers the question of ‘How to make bikes more sustainable?’ with a wild 3D-printed aluminum truss frame & fork design in a Project:RideGreen exercise with German BIKE Magazin. The conceptual project takes a look at a new bike’s real lifetime environmental costs and the ability to realistically recycle individual elements of a bicycle, going far beyond the frame itself. So while the show stopper is Canyon’s unique alloy rigid MTB frameset, there’s also lurking more eco-friendly details like German-made brakes you can buy today and prototype SRAM cranks & derailleur that may be in development… 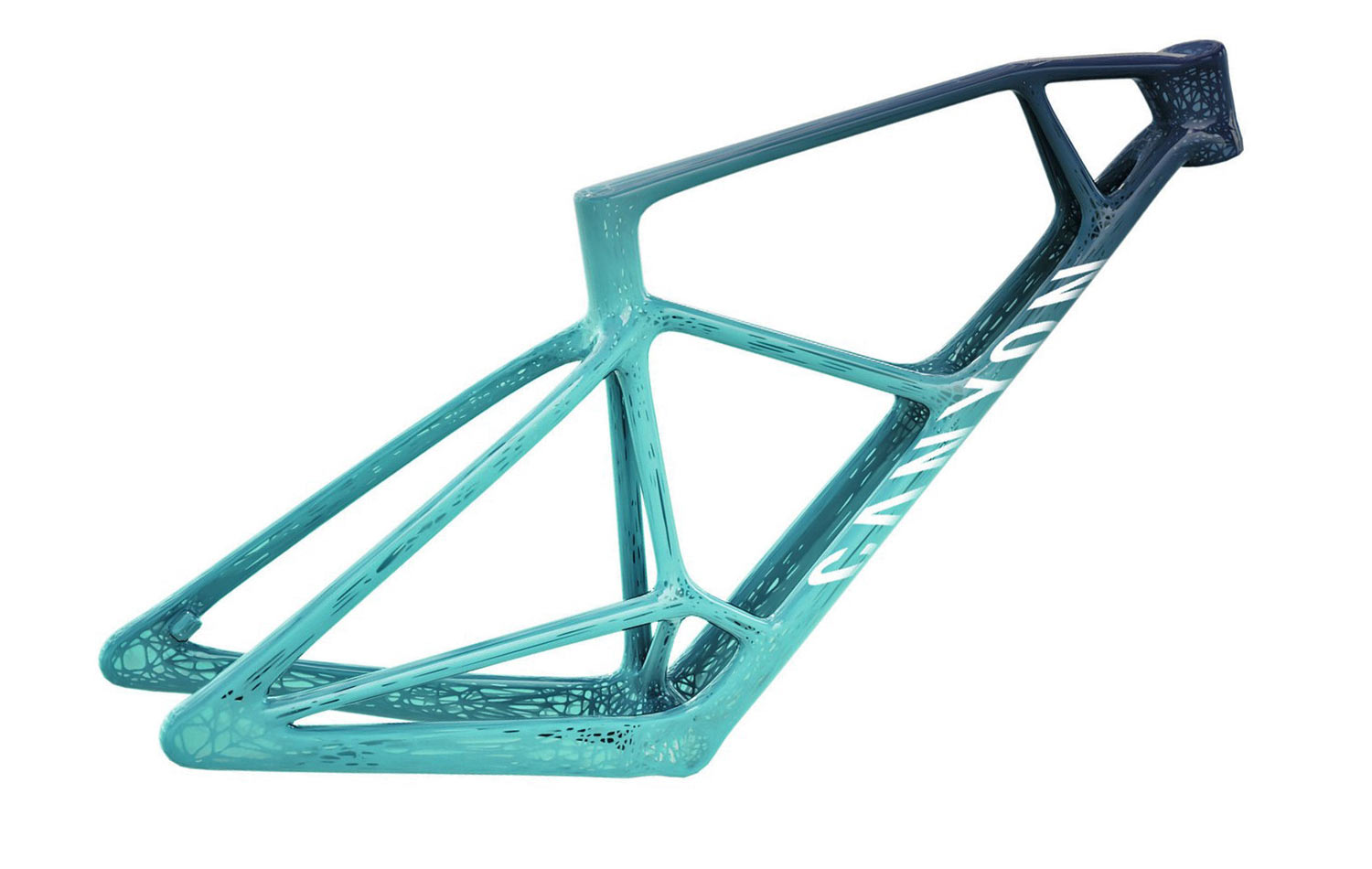 German BIKE magazine calls the bike a “Cradle-2-Cradle Bike” developed to see if it was possible to design and produce a completely sustainable bike, where all of the material that goes into the bike is fully recyclable in a usable way. To them, that means at the end of its life, the bike and its components should be able to be broken down completely into individual elements, and each of those materials should be able to be reused to serve a similar when recycled without loss in performance. 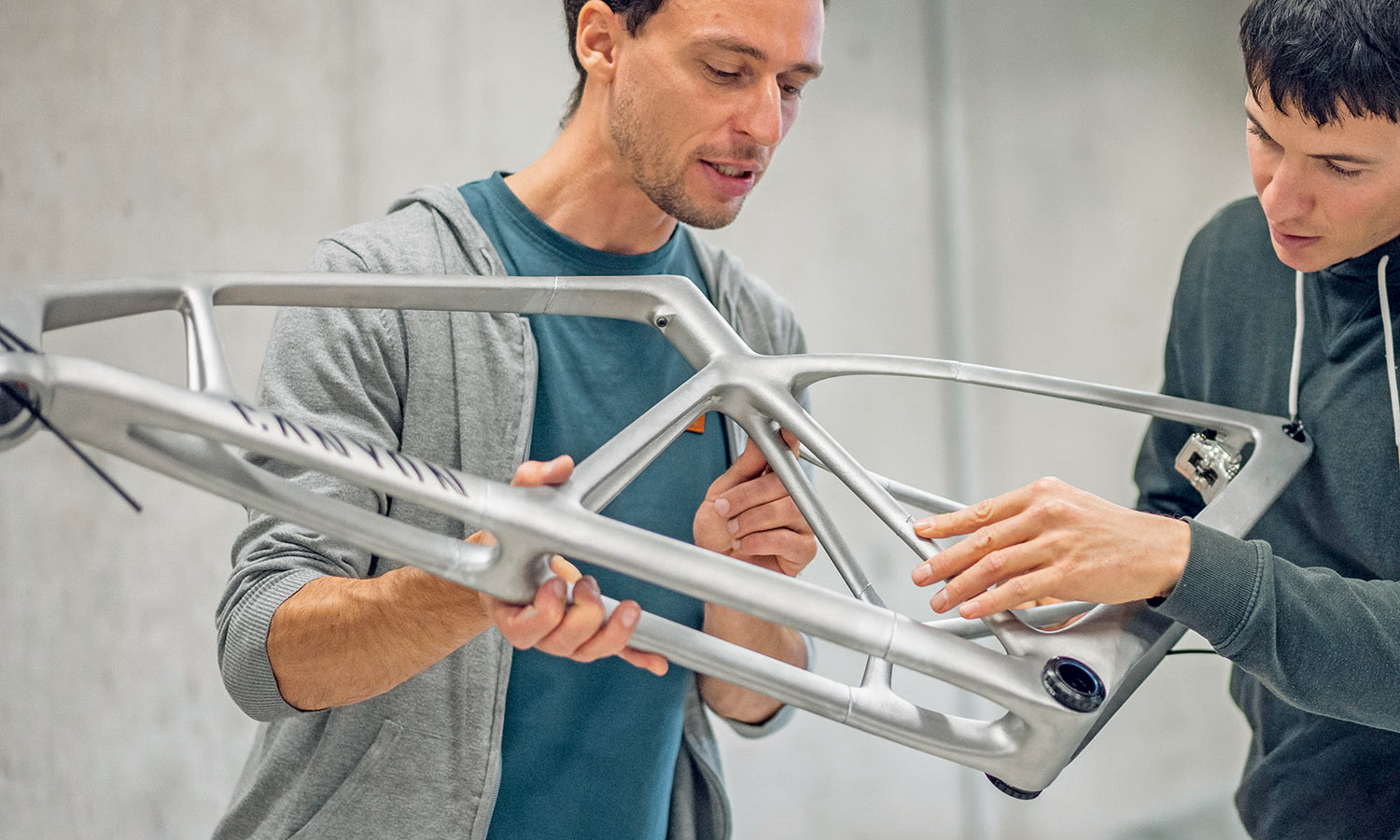 The ultimate idea was to create a bike not only with a lower carbon footprint, but one that truly used materials in a sustainable way. That naturally rules out many conventional plastics or thermoset resin-based carbon composites which degrade with each time they are recycled. This is where metals shine.

And Canyon’s rigid 29er mountain bike frameset concept uses 3D-printed aluminum, which is both highly recyclable and could have an even lower carbon footprint by being produced close to the end-user. 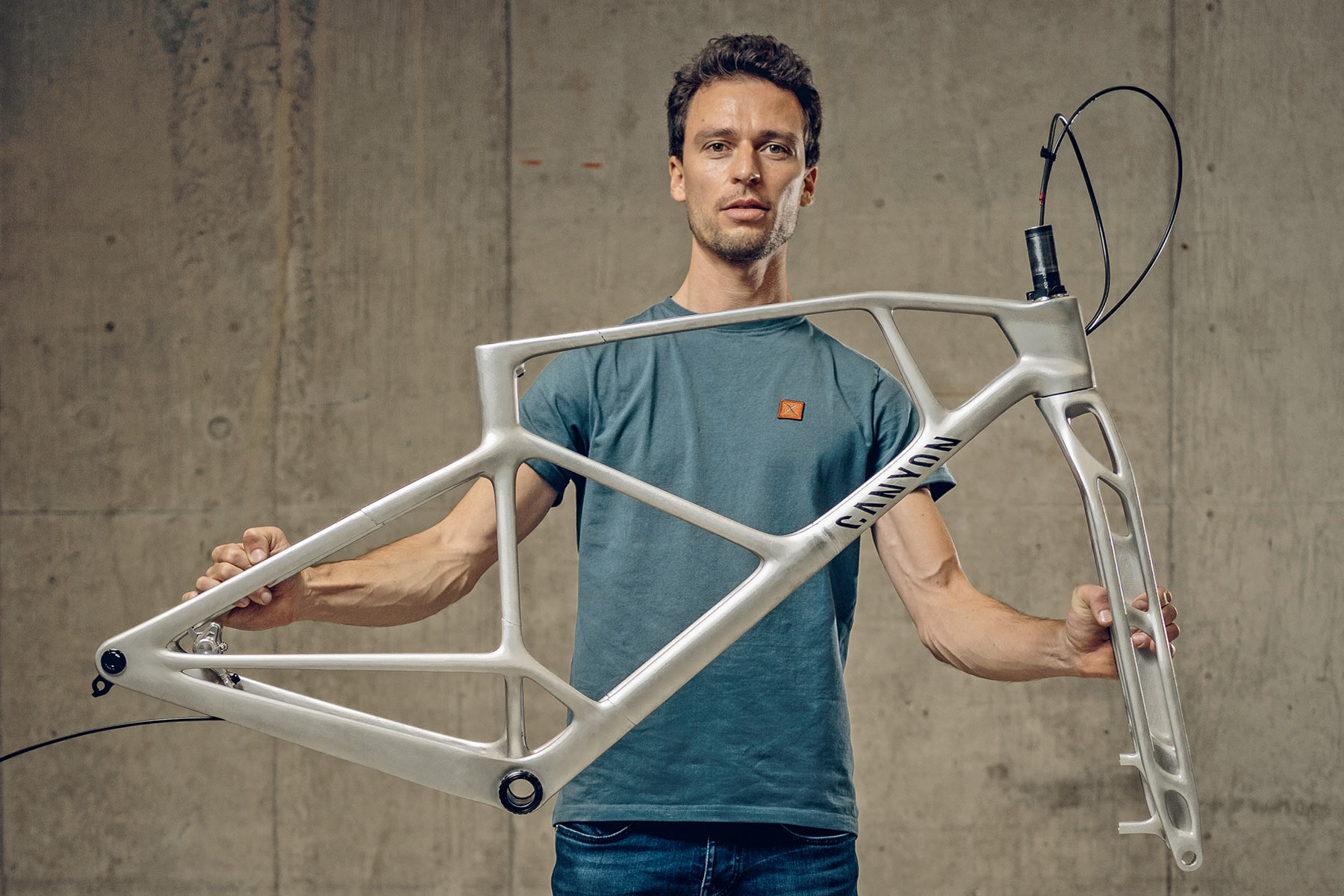 Canyon engineers took advantage of the flexibility of creating an almost infinitely-complex latticework skeleton thanks to the laser sintering technology of the 3D-printed alloy to handle structural loads (see the turquoise rendering, above) and topped it off with a thin shell to protect the frameset and make it easier to keep clean.

The Canyon project bike prototype was created by 3D-printing specialists Materialise, who used Selective Laser Sintering with a material that appears to melt a blend of aluminum & polyamide powders to create the final alloy product. Due to the size limitation of the 3D-printer, the ~2kg frame was created in three pieces sleeved & bonded together, plus a separate rigid fork. 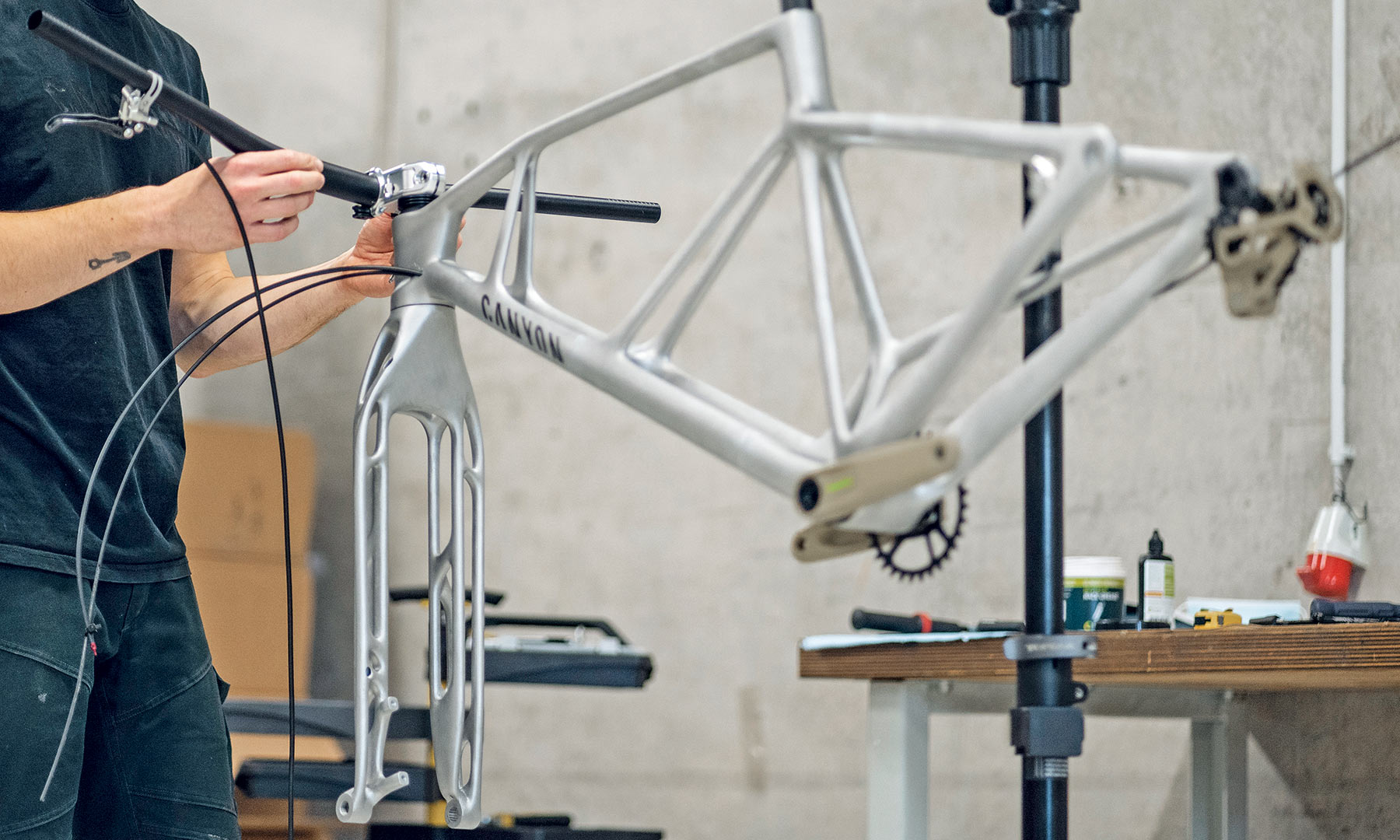 It’s a relatively slow process, but could lay the groundwork for some scaled-up production. With complete control over the design inside & out, Canyon included features like continuously-guided internal cable routing through the individual struts of the downtube and open fork structure. Plus, there are finished bearing seats for the headset, a traditional BSA threaded bottom bracket, Boost-spaced thru-axles, post mount brakes with no adapters needed, a wedge-style seatpost clamp, and a UDH. 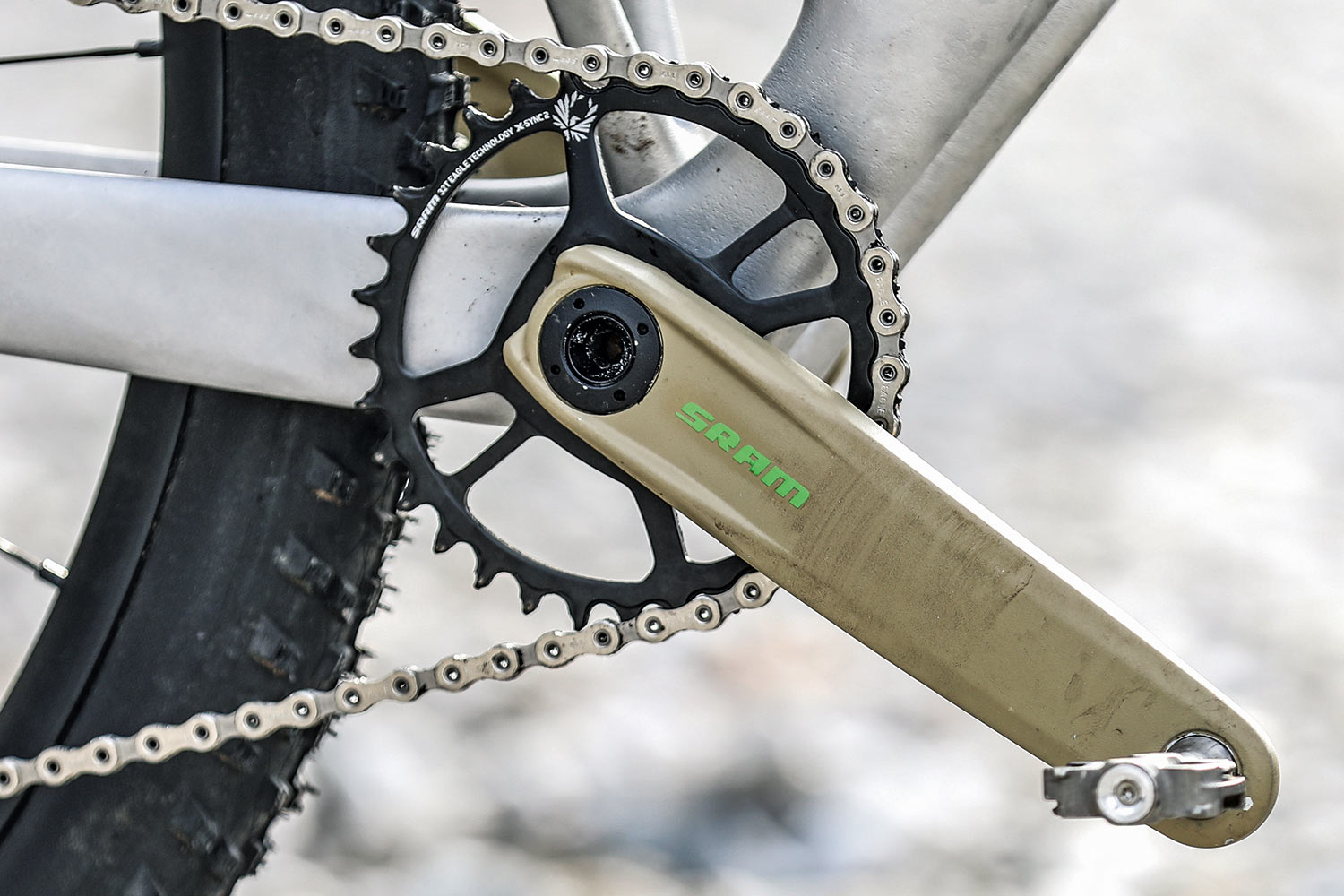 And finishing it off, it might just use a prototype 3D-printed SRAM crankset too? Most of the premium cranks from SRAM – drivetrain partner on the eco C-2-C project – are carbon, which is not so good cradle-to-cradle. So we saw these uniquely colored, barely labeled SRAM cranks and immediately recalled SRAM’s own Ai-optimized 3D-printed titanium prototype cranksets that we spotted last Spring!

Ultimately though, it looks like this is probably just a forged 6000 series aluminum NX crankset with a one-off finish. 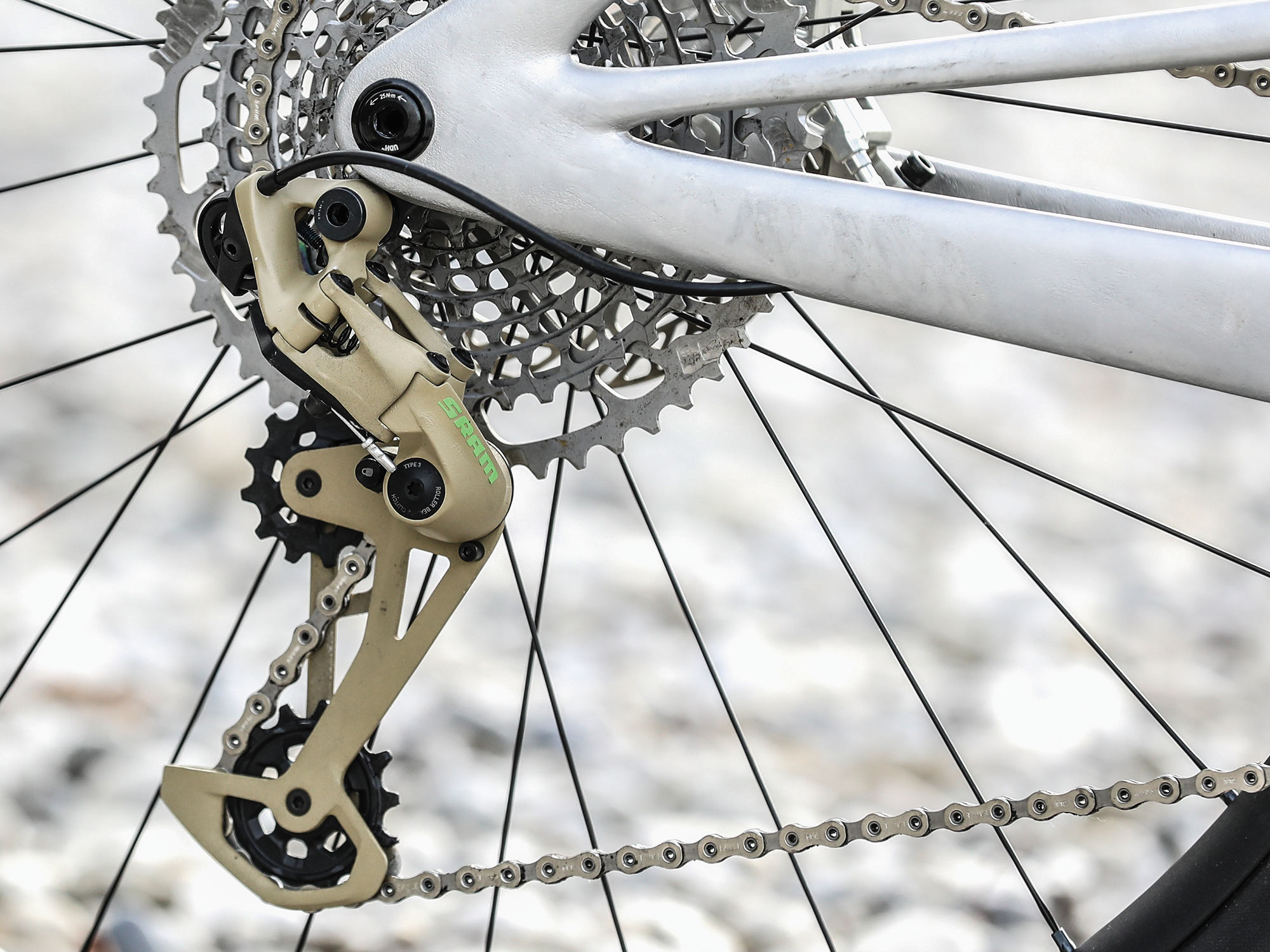 But how about that SRAM Eagle rear derailleur? Is that a sneaky color-matched prototype? Interestingly it looks like the upper half of the mechanical Eagle derailleur is a SRAM XX1 model. But since XX1 has a carbon lower cage that was out for the C-2-C project, and it looks like they probably swapped in an all-alloy X01 cage. Likely the color is simply a custom powder coat for all of the standard alloy parts.

But interestingly it does appear to stick with regular plastic pulleys which aren’t infinitely recyclable. 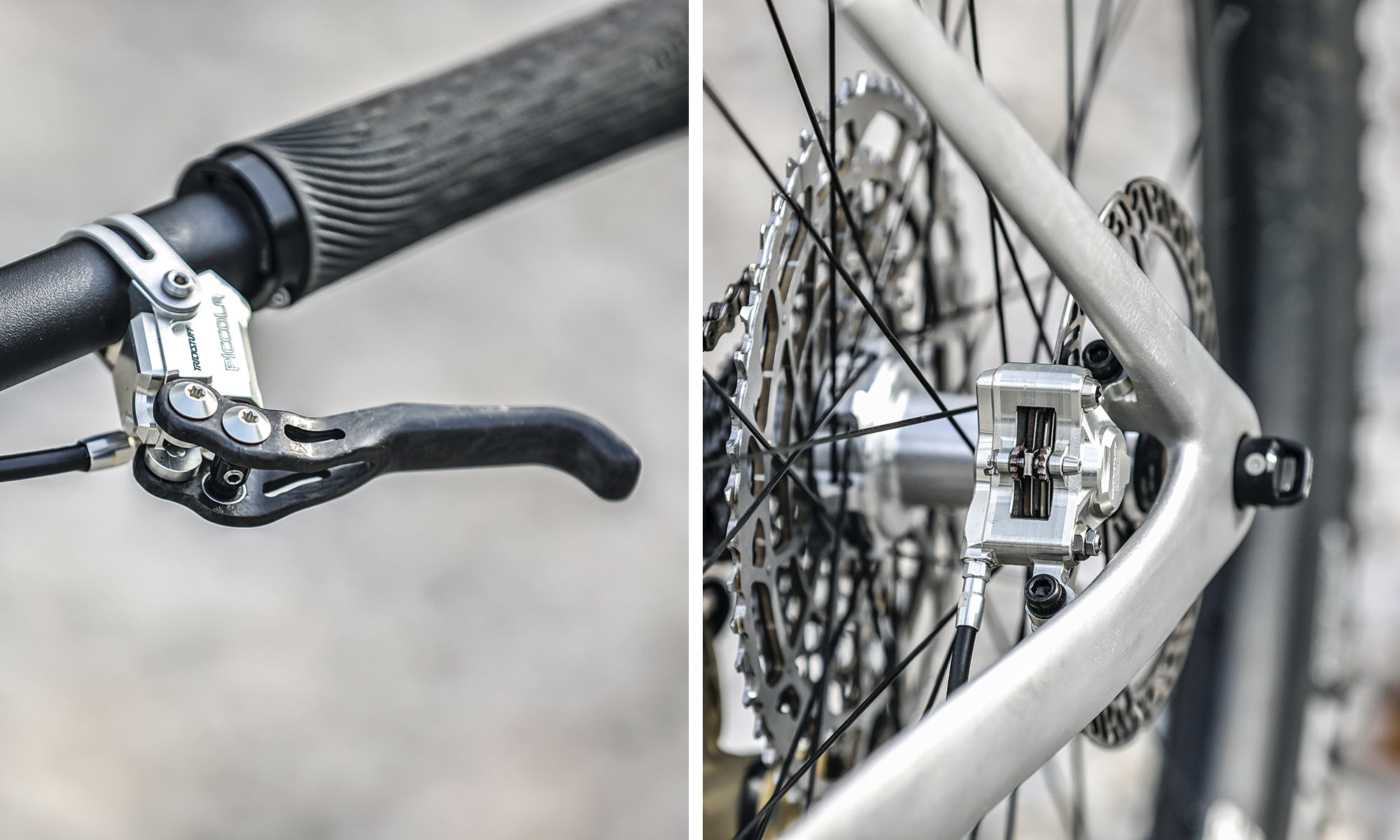 A huge part of BIKE’s Cradle-2-Cradle sustainable bike experiment ultimately boils down to the recyclability of individual components. That’s one key way how bikes can truly be more sustainable. And it comes back to companies that are responsibly producing products with recyclable material.

The Trickstuff brakes on this bike are a good example of a product built to last, with service parts available, but also in that they can be melted down at the end of their life and the aluminum given another life.

Schwalbe also already collects damaged inner tubes from bike shops to be used to manufacture new tubes, and likely their tires can be recycled in a similar way. 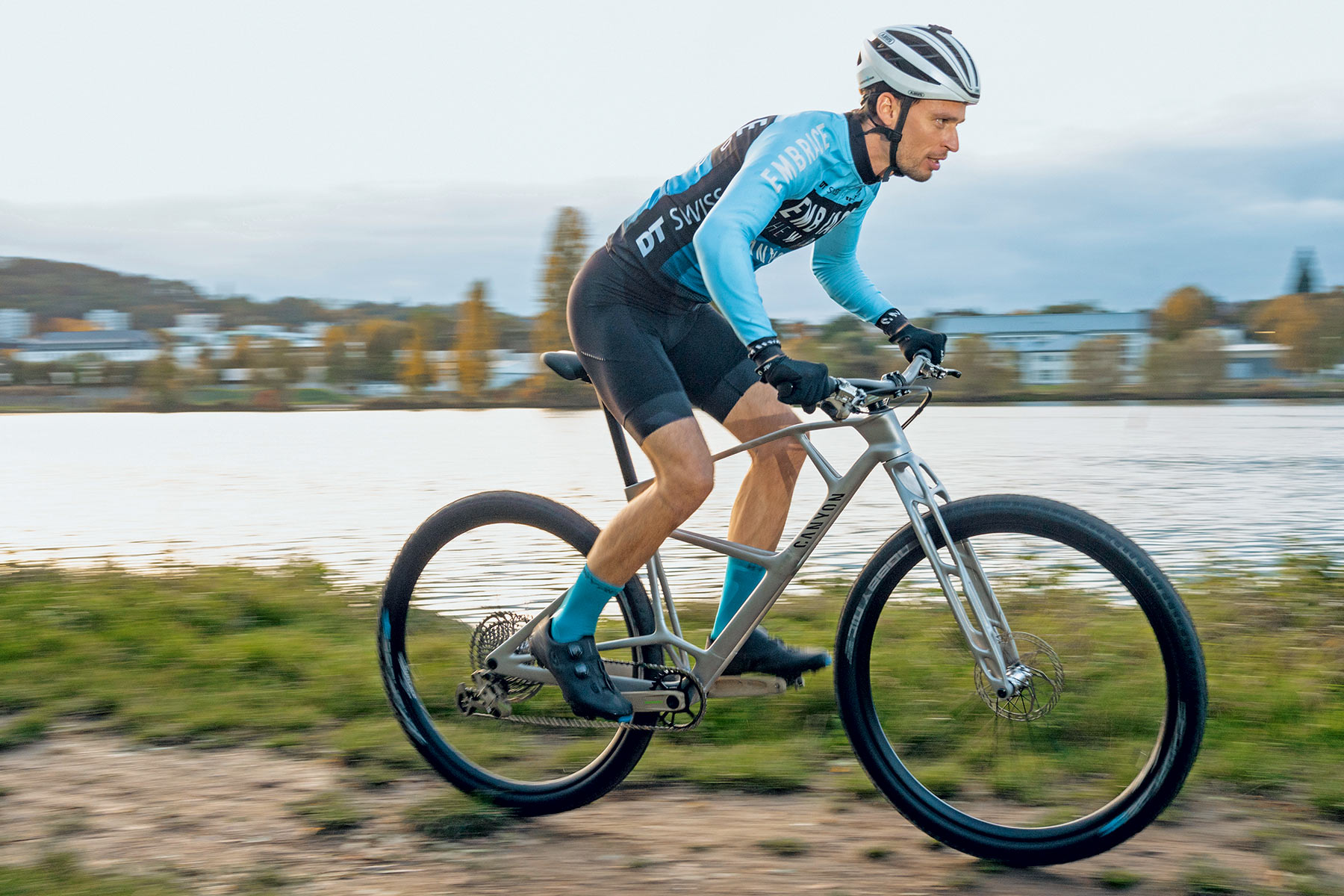 For the time being, this 3D-printed alloy Canyon hardtail frame and its rigid 29er XC fork are prototypes only – although it is clearly a rideable bike. BIKE Magazin says their Project:RideGreen Cradle-2-Cradle bike project will keep going as they work with these and more manufacturers in the bike industry to rethink the ultimate sustainability of bike products.

And Canyon seems open to both taking a deeper look at how they can optimize bike manufacturing using similar sustainable manufacturing techniques like this, and to generally pursuing alternative technologies to further the development of their mass-produced bikes. So maybe a 3D-printed Canyon bike isn’t as far off as you might imagine.

What are those pedals?

I expect within just this project he’s designed more bikes than you ever will.

I like these replies with no context. Shame so many comments are deleted.

That’s quite a nice concept of what AI generative-design can produce, Decathlon had shown a similar project 1 or 2 years ago Decathlon explores the idea through Autodesk – Bikerumor.

How to train arm pump without a moto! Low maintenance.

I’m assuming they made the fork that length so they could swap in suspension, but it would have been more interesting with a shorter one.

If carbon reduction is the goal then the bike should be made of steel. The environmental cost of mining/refining aluminum puts it way behind, regardless of the production method used to make the finished product. Also, powder coat paint. Far less VOC.

I think, this frame is weak.